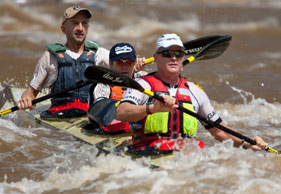 After running both the Two Oceans Ultra and the Comrades Marathon for the first time last year, Marcel Joubert, Cape Town-based CEO of The Platinum Group, was a bit disappointed when it was all over. That’s when he decided 2011 was the year to go big! He not only added one or two extra goals to his To Do List, he added 11 more! And if all goes well, come 29 May Marcel would have ticked off the following events:

HOW IT ALL STARTED

If Marcel isn’t striding along the base of Table Mountain to a glorious sunset he can be found scaling Llandudno Ravine with his loyal Staffie Rocco or bounding over Chapman’s Peak. That’s if he’s not toughing it out in punishing mountain bike events or paddling in the sweltering Dusi valley. This wasn’t always the case though. After a very active youth, spent sky-diving, hang-gliding, scuba-diving, canoeing, surfing, motor-cycling and playing squash at a provincial level, a back injury saw Marcel sidelined in his early thirties. “I’d always been super lean when I was younger, so I grew up thinking I was relatively immune against weight-gain, but I slipped into a sedentary lifestyle where I was working too hard, eating and drinking way too much and was soon a solid match for Os du Randt!” he laughs.

So on New Year’s Day 2006, Marcel decided enough was enough. “I spoke to my friends, family and my life partner, Moira O’Reilly, and embarked on a complete holistic lifestyle overhaul. Along with a host of other changes, I entered the Two Oceans Half Marathon and I really got into my running, which was surprising because I had never enjoyed it before.” He remembers how the bug really bit when he had an encounter with his ‘nirvana’, trail running at the first Trail Series at Silvermine in Cape Town in 2008. “We had so much fun we thought we had died and gone to heaven! It was a moment of complete, spontaneous euphoria.”

It wasn’t all plain sailing though. As an inexperienced runner, Marcel initially suffered every running injury you can imagine but he persevered and slowly became stronger and more injury resistant. Then in 2008 he suffered a major blow when he tore his knee cartilage. “The injury took me completely out of running for 15 months and I really climbed the walls during that period.” But he turned the negative into the positive and quickly re-channelled his energy into cycling despite his initial reluctance to the sport.

BRING ON THE CHALLENGES

After knee surgery at the end of 2009 and months of rehabilitation, Marcel’s injured knee eventually recovered sufficiently to start running again at the end of January 2010, when he decided to take on his maiden Two Oceans and Comrades. Four months later he had completed the Peninsula Marathon, Two Oceans and Comrades in 9:27. When he crossed the Comrades’ finish line he wasn’t at all relieved that he was finished, but sad that such an exhilarating journey was over. Cue the next challenge.

“I’ve always been a hardy challenger type, motivated by challenges and if you tell me something can’t be done, I want to do it. I’ve stacked the calendar full this year; I’d like to see whether I can do it. It’s a deeply personal thing. I’m not looking for any external validation but I suppose it can be inspiring.”

Often a complete novice at some of the challenges he has taken on, Marcel is unperturbed by the unknown that lies ahead. When he did Sani2C for the first time last year, he had only been on a mountain bike a few times prior to the event but he loved every minute of it. It was the same story with last month’s Dusi as a handful of canoe sessions had to suffice, but again Marcel thrived. He completed the Dusi with friends Bruce Fordyce and Oscar Chalupsky and says if he had known how much fun the Dusi is he would have done it every year for the last twenty!

To make his undertaking even more daunting Marcel had to enlist a professional coach to improve his swimming as he had never learned to exhale under water because he suffered from a range of respiratory diseases as a child. He also had to overhaul his sleeping patterns as he is a night owl but could only find time to train in the mornings at 4am. But as always Marcel simply pushed through and he finished the swimming leg of Ironman 70.3 halfway up the field and is now confident to take on full Ironman.

While most of us would probably think we deserve an award after taking on such a mammoth undertaking, Marcel doesn’t agree. “Bar the odd killer interval session, I love every training session so much that each one is a complete reward in itself. As tough as some of the events have been, I’ve loved every minute of them too. I don’t care about the elements. I’m out in nature and find it exhilarating! Obviously, I’ll have a bit of a rest after Comrades, which is my last big challenge in the first half of this year”

But Marcel won’t be sitting still for too long after that… In the second half of the year he’ll be tackling the Hout Bay Trail Challenge, The Puffer, The Otter Trail Run, SkyRun, Table Mountain Challenge, The Swazi Frontier, Xterra World Championships in Maui, New York Marathon, Wines2Whales, 94.7, Amashova and a few others.

“I feel incredibly blessed to be experiencing such a rich, vibrant, diverse tapestry of unbelievable experiences. It’s one big magic carpet ride!”