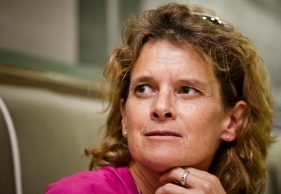 Who can ever forget South Africa’s golden child Zola Budd? With her slight 48kg frame, bare feet and shy demeanour, she stole the hearts of many South Africans when she burst onto the athletics scene in the early 80s. In less than three years she twice broke the world record in the women’s 5 000m and twice was the women’s winner at the World Cross-Country Championships. Unfortunately, her brilliant athletic achievements were overshadowed by South Africa’s apartheid policy and her decision to apply for British citizenship in order to realise her dream of competing at the Olympics – and what happened at the 1984 Los Angeles Games.

LIVING IN AMERICA
Zola lives in Myrtle Beach, South Carolina, with husband Mike and their three children, and though they are very happy, Zola admits to missing South Africa immensely. “Life here is very different. In summer it is hot and humid and in winter even colder than Bloemfontein! I miss the nature and the sunshine of the Free State. Mike still has business interests in South Africa and we plan to move back within the next year or two,” says Zola, who initially moved to the USA to try her hand at the lucrative veteran’s racing circuit. It proved a good move, as she has performed well in the past few years, regularly running away from athletes half her age!

Zola’s priority these days is her family. “My eldest daughter runs cross-country and our twins play soccer. I love being a mother, though it can be challenging! Your children grow up so fast and that’s why I try to spend as much time as possible with them,” says Zola, who is assistant-coach at Coastal Carolina University and has completed a Masters degree in counselling. She is also involved in a development programme for children, and is busy setting up a distribution network for Newton running shoes in South Africa.

LOOKING BACK
Zola was born in 1966 in Bloemfontein and was one of five kids. She came from a typical Afrikaans background and was very close to her older sister. “Jenny was like a mother to me and the two of us often ran together,” says Zola, who tragically lost her sister to cancer in 1980. This was one of her greatest losses in life. “Not a day passes that I don’t think of her. I miss her every single day and I think the fact that I was able to handle many difficult situations in life was because of my sister.”

When Jenny passed away, a heartbroken Zola kept on running: she wasn’t good at any other sport, had no ball sense, and describes her swimming skills as that of a rock. But she was brilliant at running! “I always ran away from my cousins and I knew I could run, but never really realised how fast.”

GLOBAL ATTENTION
Zola first captured South Africa’s attention when as a 15-year-old she was crowned 1 500m and 3 000m national women’s champion. Shortly after that the international spotlight fell on her when she clocked 15:01.83 for the 5 000m in Stellenbosch, breaking the world record by more than six seconds. Unfortunately, the record was never officially ratified because of South Africa’s sporting exile.

That just seemed to fuel the international media’s fascination with the child star. Here was a shy girl from Bloemfontein who ran world class times at the age of 17. Not only was she from a country that was ostracised by the world for its apartheid policies, but Zola seemed on her way to run even better times. With her distinct running style and bare feet, she became an overnight star. Even today she gets asked why she ran without shoes and the answer is simple: “All my friends ran barefoot. Very few kids had spikes, so it was the most natural thing to run without shoes. If I did have spikes I would have really looked odd in my training group!”

THE BRITISH EXPERIENCE
In order for Zola to sidestep the international sporting boycott, the Budd family was persuaded to apply for British citizenship for her on the grounds that her grandfather was British. Citizenship was granted, but what was supposed to be an exciting time in the life of a young athlete quickly turned out to be a time of immense pressure, a loss of an innocent childhood, and great sadness for Zola and her family.

In 1985 Zola officially claimed the 5 000m world record (14:48.07) while representing Great Britain, and though it was a great moment, she describes the experience as artificial. She also describes being crowned World Cross-country Champion in 1985 and 1986 as special, but also very ‘plastic’. “Those things pass, running achievements are artificial – it is the memories you take from good training sessions and chatting to friends that stay with you.”

A young Zola tried her best to adapt to her adopted country, but as a 17-year-old she had to handle immense pressure and this finally took its toll on her and her family. “The pressure made me very negative and it also tore our family apart,” says Zola, who was often criticised by the international media for not speaking out on the political situation back in her home country. “I don’t have any regrets. I have an interest in politics, but certainly did not and still don’t see myself as an opinion-former.”

Looking back at her life in England, she says there are things she would change if she could do it all over again. She would not have emigrated to England in the first place, and secondly, she would definitely not have run in the 1984 Olympics.

OLYMPIC NIGHTMARE
Most athletes dream of one day competing at the Olympics and for the young Zola it was no different. But no one could have predicted how her childhood dream would turn into a nightmare. Today she only remembers certain aspects about that controversial 3000m final. “I remember the pace suddenly slowing down quite a bit and we were all bundled together. I went ahead, felt a shove and the next thing she (Mary Decker) was lying next to the track. The crowd starting booing and the only thing I wanted to do was finish the race and not finish on the podium.”

Most South Africans were glued to their TV screens and their hearts went out to a distraught Zola as she finished seventh. An emotional Decker, America’s favourite to win, was carried off the track and was later reported as saying Zola caused her to fall and she wanted nothing to do with the teen sensation. The International Amateur Athletics Federation (IAAF) investigated the incident and found that Zola was not responsible for the collision, and years later Mary admitted that she was probably the cause of the collision, as she was not experienced running in a bunch.

This was not much of a consolation, as it seemed as if Zola’s life was never going to be the same. In 1988 she returned to South Africa after she was banned by the IAAF, who claimed she took part in an event in her home country. Zola denied this, but shortly after retired from international competition for several years and in April 1989 she married Mike. Then in 1991 she returned to athletics and became the second-fastest woman in the world over 3 000m.

But that clash in Los Angeles stayed with her. “It feels as if that incident is the only thing people remember about me. To be honest, I don’t really think about it anymore. After three kids even something like that becomes a distant memory!”

TRAINING
Today Zola still trains six days a week and often competes in races in the USA. In 2008 she amazed coaches, supporters and athletes alike when at a 5 000m cross-country race in North Carolina she beat athletes half her age! “I just went for fun with the local cross-country team. For me it was just another cross-country race, but it turned out to be quite a good race,” says Zola, who prefers cross-country to track.

A couple of years ago she ventured into marathons, running her first in London in 2003, but did not finish. In 2008 she ran a 3:10 in Bloemfontein, which she followed up with a 2:59 in New York. “I don’t like marathons at all, probably because I get hypoglycaemic and usually feel very sick. I prefer shorter distances and won’t be doing another marathon anytime soon.”

She mostly trains alone in the nearby woods surrounding her home. “I miss the off-road routes in Bloemfontein and my beloved Kimberley Road where I used to run. These days I train about a quarter of what I used to in my competitive years. I am only competitive within myself.”

HARD TIMES
Zola has had to endure many setbacks in her life, including being estranged from her father, Frank Budd, for a long time. “The media likes stories, and though one gets used to it to a certain extent, it still hurts. It’s especially bad when my kids get drawn into it and they have nothing to do with it.”

As much as she has had to endure disappointment on the athletics field and sadness in her personal life, she has certainly come out the other side a much stronger person. “I think these days I can show my middle finger to people and feel good about it, whereas before I was too scared to say anything! My faith has deepened and I was forced to read up on deeper issues in life. I love reading and am very interested in existential philosophy.”

Her victories over the years don’t count much to her anymore; in fact, all her medals are stored somewhere in a box in George. Over the years she has come to realise that running should be fun and not the burden it turned became. “After I broke the 5 000m world record at Coetzenburg, everything changed. I could no longer run for myself and winning became very important to the people around me.”

“I would have appreciated it if back then my coach said to me that it was OK to lose and that I should run for myself, and not to make other people happy. If I could advise young runners, I would say you need to run for yourself, not for your coach and not for your school. Run as part of a process, not a final goal.”

If she could have her life over today, she would probably not have run at all, says Zola: “Sometimes I think if I had never run I would have had a professional career now. I don’t miss competing at international level at all!”

Over the years she has learnt to love running again, and these days she can’t see her future without running. “It’s my Prozac. It’s the only time that I feel one with the universe, when I can picture myself as a little dot somewhere on earth. It is something you can do to bring you back into touch with nature and God.”

So does she see herself as a Living Legend? “No way, but it is nice to hear, especially with the emphasis on ‘Living,’” chuckles Zola. In a couple of years from now she sees herself on a farm in the Karoo, close to Colesburg, where her closest neighbours will be a day’s travel away! But for now Zola Budd-Pieterse is, for once, content, happy and free of pressure. Today she runs as she should have back then – for herself, and for the pure love of the sport.

FAST FACTS
Favourite movie: Lion King
Best holiday destination: Glentana, George
Favourite food and drink: Mealiepap and cream soda
First poster ever on your wall: A poster of horses
Most beautiful words: “If you know the why, you can do anything.” – Nietzsche