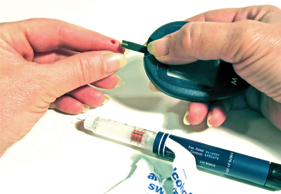 Most people know the following basic facts about diabetes: there are two types of diabetes and people with diabetes should avoid sugar. But this doesn’t mean you truly understand what this disease is! Very simply, diabetes is the inability of a person’s body to convert glucose that enters your body in the form of food, to energy that can be stored and used at a later stage. Where a healthy person’s body will release insulin to do this and automatically regulate glucose levels to stay anywhere between 3.6 and 5.8 millimoles per litre, someone with diabetes can either not produce their own insulin, or not produce enough efficient insulin.

And that is also the difference between type 1 and 2 diabetes. People with type 1 cannot produce any insulin, while people with type 2 produce insulin but it is not as effective as it used to be. This may be caused by insulin resistance, which in most cases is due to excessive body fat around the abdominal area.

Type 1 diabetes cannot be prevented and its exact causes are unknown. It is usually diagnosed during childhood, adolescence or in your twenties and thirties. Type 2 diabetes is generally caused by a poor lifestyle and is preventable to a certain extent. Almost 90% of people with diabetes have type 2 and it presents generally in adults. However, it is becoming more prevalent in children and adolescents as the incidence of obesity is increasing due to bad eating habits and a lack of exercise. Both types of diabetes can improve significantly by taking up regular exercise and eating healthier.

CORNERSTONES OF TREATMENT
There are three cornerstones of treatment that are prescribed to diabetics to manage their disease:
• Blood glucose-lowering tablets or insulin.
• A healthy eating plan.
• Exercise.

Eating a balanced meal, including low GI foods, will help someone with diabetes to maintain a steady flow of glucose into his blood, instead of a spike and a crash, and therefore contribute to the regulation of his blood glucose levels. Exercise increases the body’s sensitivity to insulin and enhances the use of blood glucose, thereby lowering it naturally. This means a person with type 1 diabetes who exercises will need less insulin than without exercise.

YOU CAN STILL RUN
So just how much exercise can a person with diabetes cope with? Are they capable of running the Comrades or becoming an Ironman? The answer is a resounding yes! Although it is risky for a diabetic to run anything longer than a standard marathon, it is possible, says Andrew Heilbrunn, head biokineticist at the Centre for Diabetes and Endocrinology (CDE) in Houghton, Johannesburg. Andrew specialises in the treatment and management of active diabetics.

Runners with diabetes have to put more effort into their preparation, says Andrew, because diabetics choosing to run long distances stand the chance of developing hypoglycaemia or ketoacidosis:
• Hypoglycaemia will occur if the diabetic runner takes in too much insulin before the race and has not eaten enough carbohydrates before and during the race. The result is very low blood glucose levels and even a hypoglycaemic coma, which has to be corrected with a glucose drip or a glucagon injection by a paramedic.
• Ketoacidosis occurs when the diabetic runner takes in too little insulin and the blood glucose levels go too high during the race. The runner can then become nauseous and dehydrated with severe stomach cramps.

Both hypoglycaemia and ketoacidosis are extremely dangerous and can be life-threatening. However, with the correct management they are both avoidable.

MANAGING DIABETES
Diabetes and exercise is not an exact science and the diabetic athlete has to carefully and consistently monitor his blood glucose levels, insulin, meals, snacks and type of exercise. Runners with diabetes also need to be in tune with how they feel and stop if they are not feeling good. Furthermore they need to take less insulin before the race and decrease their normal dosage of insulin for 24 hours after the race. This will ensure that they do not have a hypoglycaemic episode after the race, because their metabolism will remain higher after the race for at least 12-24 hours.

If you have any queries regarding diabetes and training contact the Centre for Diabetes and Endocrinology (CDE) on (011) 712 6000.

WATCH THIS SPACE
Andr? Grobler, a long distance runner from Pretoria, was diagnosed with type 1 diabetes when he was 14 years old, the same time he started running. Although he says it was the diabetes that initially got him started, the reason why he is still running today is because he simply loves every minute of it!

Andr? is adamant that his diabetes is not going to hold him back from his love for running. In fact, his illness only motivates him to do better. “I don’t see diabetes as an obstacle, but rather a challenge. If you manage it correctly, it doesn’t have to hold you back in any aspect of life.”

He has tried three times before to finish the Comrades Marathon, but still doesn’t have a medal, as his condition has prevented him from finishing each year. Last year he came as close as 7km from the finish line before he ran out of fuel. This year, he hopes he has the right recipe of insulin and carbs so he can make it across the finish line.

“Every year I learn a little more about what to do and what not to do. It’s a science, with lots of trial and error, and immense preparation, but I work closely with my biokineticist and doctor, and with their advice I think I’ll finish it this year. And then, once I have the recipe for success, I want to go for my green number. Why should I sit on the fence and not compete?”

Ultra-Diabetics
Andrew has the following tips for people with diabetes who want to attempt an ultra-marathon:
• Consult your doctor and biokineticist before you start a new training regime.
• Always wear a Medic Alert bracelet that indicates you have diabetes, whether you’re training or racing.
• Mimic your race day in your training sessions in order to determine the correct insulin dosage and snacks that you will need on race day.
• Keep your blood glucose levels between 6-8 millimoles per litre for two weeks before the race. In this time also avoid any incidents where your blood sugar drops.
• Don’t take too much insulin on race morning if your sugar is high; take the excitement (adrenaline factor) into account.
• When you are racing force yourself to eat something every half hour and drink 400-800ml of water every hour, even if you’re not hungry or thirsty.
• Most importantly, monitor yourself and listen to your body!