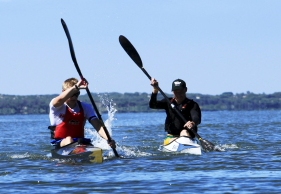 Taking part in the Totalsports Challenge was once again a dream come true, but I knew it was going to be tough! Not only did I have to be concerned about my own race, but taking part in a seven-man team meant that I had six other athletes relying on me. On top of that, we were racing against a combination of some of the most competitive athletes in the country and from abroad, all giving 110% effort to win the 2011 Totalsports Challenge Title. You need to give your best from the word go.

Racing as part of a team obviously meant we put the strongest members we could in each discipline, because a weak link in any of the disciplines can cost you precious seconds, which are nearly impossible to make up at elite level. With a team event it is not only your own race you have to be concerned about, but that of your team. We are all competitive athletes who go into a race with the mindset of winning.

SUPERB COMPETITION
Arriving at the venue I immediately noticed a difference in the vibe around the transition areas. Athletes arrived with enough time to warm up and prepare before their discipline began, and it was clear that this year teams meant business. Having a World Champion competing in almost all seven legs certainly raised the level amongst the top four teams. For me, knowing that I would be racing against former Junior and current Senior World Champion Ben Brown in the 13km K1 canoe leg was a thought that never left my mind!

RACING TACTICS
Our team’s racing tactics were simple: “Here’s the start, there’s the finish, go harder than you have ever gone before!” Having been part of a winning seven-man team in the past, I was prepared to give all from the start of my discipline.

Arriving at the Arabella Estate in Kleinmond, where the canoe leg started and finished, I felt a little anxious not knowing how my team was doing, as the runners went through a trail section before reaching the canoe transition. The waiting period is nerve-wracking for any athlete, especially for the top three teams. With minutes to spare and hearing the announcer say that the first two teams have broken away, the excitement mounted as I started wondering who was in the lead. The only thought that went through my mind when I saw my team’s runner seconds ahead of the competition was that I needed to get away as fast as possible and gain as much lead in order for the competing team to work as hard as possible to catch up.

ONE FOR ALL AND ALL FOR ONE
When your team has given everything they possibly can to get you into the lead position, you can’t help but feel the pressure. I wanted to ensure that everything was perfect and knew that the slightest mistake could cost my team the event.

As a canoeist, I always try to figure out the competition, wondering how and when he will make his move for the finish line. So having watched how Team My Training Day/JAG’s Ben Brown won the World Marathon title with an impressive end sprint, I tried to save as much energy and strength as possible during the event to avoid unnecessary mistakes.

Approaching the transition area where our mountain bikers were waiting, I faced two hard bursts from Ben, obviously hoping that I would drop off. His attempts were unsuccessful, though, and I managed to hang on to the lead all the way, including when we jumped out of our canoes and ran to our respective mountain bikers. The best part of my race was handing over the armband to the biker knowing that I’d done everything possible for my team.

When the last member of the New Balance team crossed the finish line in first position, we were all ecstatic! Our hard work had paid off and we won in a time of 5:35:22, about three minutes ahead of Team Training Day/JAG. What an awesome feeling!

WINNING THE DAY
Our team manager, Katharine Tromp from New Balance South Africa, was at each transition and got to see the race in its full glory. It was the third year that she arranged and managed the New Balance Men’s Pro Team. “There is something very special about witnessing elite athletes pushing their limits and witnessing the determination on their faces as they know that they have to race for not only themselves, but for the team as a whole,” says Katherine.

The Totalsports Challenge is such a unique experience. There is no event that I know that brings together some of the world’s best athletes to race for one title across seven different sports. As defending champions, we will without a doubt be back next year, and I will be the defending champ in my discipline, so I plan to return fitter and stronger!