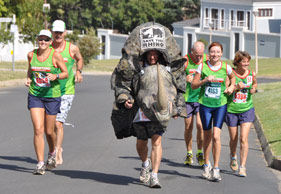 Most runners know that no matter how fit you are, running a marathon is hard work. You not only have to deal with aching muscles at some point during the race, but you also sometimes have to put up with blistering sun, wind or rain, and chafing in uncomfortable spots! In fact, running any distance is usually hard work.

Now imagine donning a 15kg rhino suit and strapping it to your body. The only thing sticking out is part of your face, your body can’t move freely, and you can’t turn your head, go to the loo, or grab your own energy gels or drinks at watering points. Even worse, imagine running 42.2km like that – not an easy task for anyone, but Chris Piears, a member of Breakthru Striders in Midrand, has never been scared of a challenge… especially if it involves animals and conservation.

SAVE THE RHINO
Chris is one of 50 international participants who has been selected to run the Virgin London Marathon – the largest fundraising marathon in the world – on 17 April to raise funds for Save the Rhino International (www.savetherhino.org). Out of the 50 nature-loving runners, Chris will be one of 20 running in rhino suits. His aim is to make members of the public aware of rhino poaching, especially in South Africa. Therefore, he has not only targeted running the London Marathon, but has already completed several local races in the rhino suit.

His fundraising target is to raise R50 000 over the next five months, and the organisations that will benefit include Save the Rhino International (KwaZulu-Natal), Hokoyo Wildlife Trust (Botswana), and certain translocation projects of SANPARKS.

CHRIS THE CONSERVATIONIST
Chris has been involved with conservation for over 20 years. His first involvement was when he joined the Honorary Ranger Corps of South African Parks. This saw him involved in the capture and relocation of white rhino’s to various game parks in Southern Africa as well as Australia and USA, the elephant Contraception project, the translocation of the first elephants to Pilansberg National Park as well as the capture and relocation of the first group of elephants back into Mozambique, to name but a few!

“I have always loved animals and been interested in conservation. Every available holiday my family and I were in the Kruger National Park, and it must have rubbed off on my youngest son, because he is currently studying to become a vet. But my real involvement came years ago after a visit to the Kruger National Park, where I saw a group of drunk individuals throwing stones from a car to make a group of lions get up so they could take better pictures.”

Chris felt helpless and wrote to the SA National Parks Board asking how he could become involved. And so began his love affair with conservation – and fundraising. Over the past 20 years, he has raised around R2million for various conservation projects.

CHRIS THE RUNNER
Other than conservation, Chris is also passionate about all things running. He has successfully completed 13 Comrades Marathons as well as several other ultra-distance events. His love for running started while seconding a friend at Comrades. “Every year I would say to my wife, one day I am going to run the Comrades. She eventually got the hell in with me and said, ‘If you are going to run this bloody race, go and buy yourself a pair of shoes.’” And that is exactly what Chris did. Armed with a brand new pair of Saucony’s, he went home and ran 1km to the shop and 1km back. “Back home I said to my wife I might have bitten off more than I could handle. And that was only 2km. Look at me today!”

Last year Chris decided to take things a step further… and become South Africa’s running rhino! “A group of my running friends decided to run the London Marathon. I knew it was a major fundraising event and started searching their website before coming across the rhino fundraising initiative. Rhino’s and elephants have always been close to my heart, so I sent my CV and applied for one of the 50 ‘rhino’ slots. That same evening I was accepted! Then my son and friends persuaded me to run the race in one of the organisation’s 20 available rhino suits. A friend offered to sponsor my air ticket and Rolec Grindrod offered to get the suit from London to South Africa. I was on my way to London!”

RUNNING AS A RHINO
Running in a rhino suit certainly does have its challenges, says Chris. The suit arrived in a big crate and had to be unpacked to barely fit into his car. “When I first put it on, I thought how am I ever going to run in this? I tried to run around the garden, with the dog going ballistic. It was extremely hot and the head was bouncing around all over the place.”

His first training run in the suit was with his running buddies in Midrand. “I saw two taxis hit the pavement while staring at me! I even saw a pedestrian running into the bushes!” Chris and his son then made some adjustments to the suit to make it more comfortable before his first road race at the George Claasen Half Marathon in Pretoria. He has since run the Johnson Crane Half Marathon, the Spring Striders 32km, the Pick n Pay Half Marathon and a couple of other races in the suit. “I run about 8min/km with the Rhino suit. 15kg of extra weight is a lot when running! Most runners want to know why I am doing it. Most say I am crazy, but they also say they take their hats off to me.”

Every race has been part of a learning curve for Chris. For starters, he had to make a plan as to where to store his energy gels, so he pinned a plastic bag to his chest to store his goodies. And on one of his first runs he also realised he should run in pants with a drawstring, as the elasticised version kept falling off! Chris also needs to pace himself correctly, as he can’t wear a watch around his rhino ‘arm’, and he says he doesn’t want to pin the watch to the rhino head, “otherwise I will have this big thing staring at me all the time,” says Chris. One of the most difficult things wearing the suit is that he can’t hear, can’t turn around and has limited ‘tunnel’ vision.

He says many runners approach him asking how they can help, and he usually refers them to his website, where one can make a donation. Chris needed to collect a minimum of R14 000 to run as a rhino at the London Marathon, which he has done, but more funds are needed for the plight of the rhino’s. “If each runner only donates R1, I could raise at least R20 000,” says Chris. Fundraising is not his only objective, however; he also tries to educate people and has been asked to give several talks on conservation at schools and organisations.

Chris has had many fun moments in the suit. “A lot of people run up to me and say they want to stroke my horn and at the start of the Dischem Half Marathon, I ran past a runner who got such a fright she shouted and ran away from me! It’s all good fun; the only thing that upsets me is when people shake my horn, because that throws me off balance.”

LONDON HERE I COME!
Chris will be making the most of his time when jetting off to London. He will be running the Paris Marathon (without his rhino suit) a week before the London Marathon, where he is hoping to finish within six hours. He is also looking forward to meeting the other ‘rhino’s’ in the fundraising group, and is also planning to give some talks on conservation while in the UK.

He will be back in South Africa on Good Friday and plans to then concentrate on final preparations for Comrades. “I won’t run Comrades in the rhino suit unless I can find two other idiots that will run it in a team with me,” chuckles Chris.

Even though he plans to hang up his rhino suit after the London Marathon, Chris plans to continue his fundraising efforts. “If you are a South African and you don’t know about the plight of the rhino’s, then you are living in a different world. I would move this earth for conservation, and if given the opportunity to run the London Marathon in a rhino suit again next year, I would do it without even thinking.”

Chris is very grateful to his sponsors, Breakthru Sports Performance, Garmin, R?hlig-Grindrod, Flight Centre and Recal Services. If you would like to make a donation to the Save the Rhino fund, go to www.savetherhinofund.org.

RHINO COUNTRY
South Africa is home to approximately 21 000 rhino’s – more than any other country in the world. Black rhino’s are listed as critically endangered with only about 4 200 remaining, according to the International Union for Conservation of Nature (IUCN). Approximately 1 670 black rhino’s were believed to be living in South Africa in 2009. The country’s other resident species, white rhino’s, are classified as near threatened on the IUCN’s Red List of Threatened Species.

The current wave of poaching is being carried out by sophisticated criminal networks using helicopters, night-vision equipment, veterinary tranquilisers and silencers to kill rhino’s at night while attempting to avoid law enforcement patrols. The recent killing spree is largely due to heightened demand for rhino horn, which has long been prized as an ingredient in traditional Asian medicine. It has been claimed recently that rhino horn possesses cancer-curing properties, despite there being no medical evidence to support the assertion.