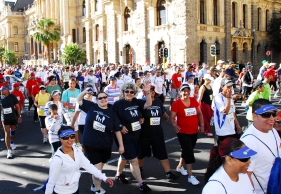 Race walking originated in England in the 1600s when footmen had to keep up with their masters’ carriages without actually running. Being a betting nation, the British soon placed bets on which nobleman’s footman walked faster and it became one of the most popular sports in England. These walkers were some of the earliest professional sportsmen, receiving prize money worth approximately $1million today and becoming as popular as golfing hero Tiger Woods. The sport of race walking has come a long way and has been an Olympic sport since 1908, featuring in most international, continental and local meetings.

THE RULES
The rules that govern race walking are generally confusing to most runners, and even to novice walkers, but it’s actually quite simple: the rules that were applied a century ago are largely still the same today. The most important include the ‘lifting rule’ and the ‘bent knee’ rule, which basically means one foot has to be in contact with the ground at all times while the advancing leg must be straightened from the moment of first contact with the ground until it’s in the vertical upright position.

It is not always easy to see if the correct technique is applied and referees can only go on what they see with the naked eye. Therefore, there is usually some controversy with regards to technique and disqualifications, especially when a walker is disqualified from a 20km or 50km race with less than a kilometre to go, having been warned already. Understandably, this causes great frustration, but it is comparable to a long jumper or a sprint athlete being disqualified for overstepping the mark or starting too fast. Like these athletes, race walkers also live on the edge to maximise performance and therefore need to be governed by these rules.

IT’S ALL ABOUT TECHNIQUE
Though the technique has been the cause of ridicule for many a walker, it is this technique that makes walking such an efficient exercise. When done properly, race walking will give you the same benefits as running but without many of the injuries that are associated with the jarring impact of running. This is why walking is such a popular sport for older people as they look for an exercise that will keep them healthy without as much risk of injuries.

Make no mistake, though, race walking is by no means only for older people! Events like the Cape Times Big Walk and the 702 Walk the Talk (both bigger in numbers than the Comrades) have introduced thousands of South Africans to the sport on a recreational level. In spite of this, competitive walking in South Africa is not as healthy as it should be, says Marc Mundell, ambassador for Race Walk SA and member of the ASA Walking Commission.

GETTING THE YOUTH INVOLVED
Marc has concerns that most walkers in South Africa are 50 years and older, and that youngsters are hesitant to become involved in the sport. “ASA elected a race walking committee in December to promote competitive race walking in South Africa. Hopefully we will be able to get youngsters interested and passionate about the sport. We need to get the message across that walking is by far the healthiest activity and that there are massive opportunities for young athletes in this event. There are a lot of track athletes who can flog themselves on the track and run 800m after 800m but they will never beat Caster Semenya. However, they can become internationally competitive walkers, travel internationally and receive bursaries to study. The opportunities are endless,” says Marc.

Though South Africa’s junior and senior walkers are a little behind international walking standards, Marc is adamant that with the right structures in place, better planning and financial support, South African walkers could become a force to be reckoned with.

WALKING STARS
South Africans have managed to perform well over the past eight years with representation at the Olympic Games, Commonwealth Games, All Africa Games and World and African Junior Championships.

Current top South African walkers include Marc and Corli Swart, who both competed at the IAAF World Race Walking Cup last year in Mexico. Ada Booyens is also a well-known face on the walking track and was nominated as one of the best World Masters athletes in October after winning six gold medals at three World Masters Athletic Championships from 2008 to 2010. Other Master race walkers who make South Africa proud are Barbara Nel, Maria Ghisleni, Lesley van Buuren, J?rgen Spencer, Gerard van den Raad and Carl Meyer, who all feature in the top 10 Masters World Rankings in their respective age groups.

PUT ON YOUR WALKING SHOES
To start walking is simply a case of putting on your shoes and hitting the road, but to become a race walker requires more than the odd stroll. A few pointers from someone who is clued up with the ins and outs of the right technique and some training will help you get your technique right. To gain the health benefits associated with walking, you have to approach it similarly to running, by training regularly and with a structured training programme.

So the next time you’re running a race and a walker is in your way, or if you’re walking a race and a runner bothers you, remember that running and walking are different, but both have their place on the road. Respect each other and share the road. There is room for everyone.

Both walkers and runners love to complain about each other. Whether you’re a runner, walker or race organiser, tell us what you think should be done to keep everybody happy and make races more enjoyable for runners and walkers alike. Log on and have your say.