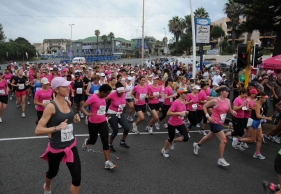 Many people are afraid of figures and try to stay clear of anything mathematically-related. Well, the figures that make up an Ironman race can send chills down the spines of even the toughest individuals. A 3.8km swim, 180km cycle followed by a full 42.2km marathon are distances that one would ordinarily only travel by boat or car, but when you do Ironman, you’re not being ordinary – you’re being extraordinary!

THE COURSE
The swim leg consists of two laps of a rectangular 1.9km route, swum anti-clockwise, in the warm Indian Ocean off Hobie Beach. Sea temperatures range between 17?C and 25?C for this time of the year.

The bike leg consists of three loops and begins at the transition at Hobie Beach. Athletes cycle along the coast for 3km towards the city. A gentle continuous 10km climb to reach the highest point of 183m above sea level follows. From there it is downhill to the 20km mark. Gentle rolling hills are the order of the day until the turn point at 34km. Rolling hills await to the 40km mark, where it is downhill to the coast and then relatively flat along the coast back to transition at 60km.

The run is a three-loop course of 14.07km along Marine Drive. The run route is a very fast, flat route with no hills, going through the top gate of Nelson Mandela Metropolitan University and out through the bottom gate of the University, back towards transition.

REGISTRATION
Last year saw 1 840 athletes and 50 PRO’s registering, continuing the steady growth of the event from the 804 entries of the inaugural event in 2005. A pasta evening takes place at PE Cold Storage, Coega on Friday 8 April at 7pm. The Awards Ceremony takes place at the same venue on Monday 11 April at 7pm, with the Official Castle Lite After-Party at Barney’s Pub on the Beachfront.

SIDE EVENTS
Alongside the main event, organisers Triangle Events have included three immensely popular side-events to create an entire weekend of events that offers something for everyone:
• Iron Girl South Africa
• The Pritt Ironkids Aquathlon
• The Vodacom Corporate Triathlon Challenge

The colour pink will be coming at you in waves as PE’s very first Iron Girl South Africa Fun Run takes place. The concept has proved highly successful in both the USA and Europe, and was unveiled in South Africa on 22 January in East London, the day before the Spec-Savers Ironman 70.3 South Africa. Iron Girl promotes health and fitness as well as fun. The entry fee is R100 and each entrant will receive an Iron Girl T-Shirt. Women from the age of 14 can enter either as individuals or as part of a mother-daughter team (team members’ times will be combined). No men allowed and strictly no cross-dressers! Entries opened on 14 February – only 1000 slots available! Visit www.irongirl.co.za for more info.

This event, which started in 2006, introduces kids to the world of sports and the spirit of Ironman. The Pritt Ironkids is the biggest Ironkids event in the world with its 1000 participants. The event is a fun-filled way to instil a love for sports and foster a healthy lifestyle in children from an early age. When finishing, the kids run along the ramp and cross the official Spec-Savers Ironman South Africa finish line, just as their Ironman heroes and heroines will do the next day.

This event is 10% of the full Ironman and serves as the ideal platform for corporate teams, school teams and individuals to pit themselves against friends, colleagues, corporate rivals and ultimately the clock. Entrants can enter either as a team or individually. If entering as an individual, the minimum age is 16 (or turning 16 during the year). If entering as a team, the minimum age for team members is 12. The entry fee is R450 per corporate team, R400 per school team and R300 per individual, open from 14 February to 14 March. Late entry is from 15 to 25 March, when the fee is R700 per team, R600 per school team and R500 per individual. A maximum of 1700 entries will be taken and entrants will receive a free T-shirt. Visit www.corporatechallenge.co.za to enter.

WHERE TO STAY
There are many places to stay close to the race, but accommodation is always at a premium when the Spec-Savers Ironman South Africa takes place, so book early:
• The Beach Hotel – across the road from the Race Start at Hobie Beach
• The Courtyard Hotel – 100m from Hobie Beach
• Road Lodge – less than 100m from Hobie Beach
• Radisson Blu Hotel
• Town Lodge
• City Lodge
• The Paxton Hotel
• Marine Hotel

DO THE TOURIST THING
Nelson Mandela Bay is surrounded by world-class tourist destinations that showcase the abundance of wild beauty that is indigenous to South Africa and the Eastern Cape, such as the Addo Elephant National Park, the Kragga Kamma Game Park and the Sea View Game Park. The city of Port Elizabeth has its own attractions, such as the Boardwalk Casino and Entertainment Complex, directly across the road from Hobie Beach, which is always a popular destination during Ironman weekend.

GET YOUR BIKE THERE
The Bike Migration prides itself on providing a unique service to cyclists all over the country. Transportation of a bike from Johannesburg to Port Elizabeth and return will cost you R700. Visit www.thebikemigration.co.za for more info.