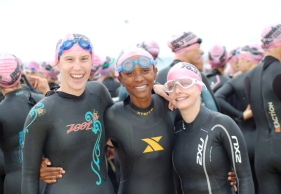 A mere five months ago, while training at the gym in Morningside, north of Johannesburg, Tsheli Lujabe heard of a guy who would be able to assist her in realising one of her sporting goals, to finish a triathlon! “I had been cycling for four years and it was time to introduce something new to my list of challenges.” Tsheli met with Stuart Hoy, the owner of an adventure lifestyle company called LIFESTRUCK, inspiring individuals and corporates to change their lives. A few days later, she went on a work trip and saw an ABSA billboard advert that said ‘Push Past Possible’. That was the final straw to convince Tsheli that the universe was conspiring in her favour. “Anything is possible, I kept telling myself.”

STEP BACK IN TIME
Let’s first rewind the story a bit. Not so long ago, swimming meant ‘floating’ in the pool and running never featured much in Tsheli’s vocabulary. The only triathlon discipline she was good at was cycling, as she taught herself a couple of years earlier to master some biking skills. That was in 2006 when she wanted to take on the 94.7 Cycle Challenge.

“I got an entry level mountain bike and on my first ride I remember seeing all these cyclists just whizzing past me. It felt like my bike was not moving at all! I continued to train on my own, but back then I was so clueless, I even rode onto the highway, not knowing that you are not allowed to ride on the highway,” says Tsheli, a clinical psychologist who currently works as a leadership consultant.

Riding with proper cycling shoes proved to be another challenge and Tsheli remember falling down so many times that she eventually phoned her cousin to take her (and her bike) back home! She persevered, finished her first Cycle Challenge in 5:12, joined a cycling club, finished the Argus, a couple more Cycle Challenges, and progressed to the point where she finished the 94.7 Cycle Challenge in an excellent time of 3:14 last year.

Apart from cycling she did not do much else. She did one half marathon at the end of 2009 after her cousin convinced her to run. Only late last year she started thinking of running a bit more and did another half marathon. And that’s where the bug bit. “That’s when I started thinking it would be a nice challenge to do a triathlon,” says Tsheli. But taking on a sea swim of 1.9km, a very tough 90km bike and a 21.1km run was still way off the radar.

AN INCREDIBLE JOURNEY BEGINS
Swimming was Tsheli’s biggest challenge. “When I started, I would swim two lengths, be totally out of breath and need to rest. I then decided to do the Total Immersion workshop. It was fantastic, because I learnt how to swim with the correct stroke, and also to relax.”

Tsheli’s journey involved a few stepping stones. In October she did her first triathlon (600m swim, 20km cycle and 5km run) at Roodeplaat Dam. “It was my first open water swim and I wasn’t even wearing a tri-suit; I swam in my swimsuit and saw a dead fish! I had to swim breaststroke all the way because I was so nervous and truly forgot what to do.”

She was so determined to achieve her goal and prove to herself that she can swim 1.5km in the open water that she got up at 3am and drove alone to Sun City to compete in a triathlon. “I managed to complete the Global 11 Triathlon (1.5km swim; 40km cycle and 10km run). That was when I realised I was on my way to Half Ironman and I was in for the adventure of a lifetime.”

Training was not always easy as she had to juggle a career, her training schedule and life as a busy mom to 11-year-old son, Jemelle. “I had to train very early in the mornings, then rush back home, get Jemelle to school and myself to work!”

RACE WEEK
Tsheli travelled to Buffalo City with a flight full of other athletes and a stomach full of butterlies! “I went to register and got my orange tag that labelled me as ‘athlete 2185.  Wow, it was really happening.” Her first experience in the sea was not a pleasant one, however. “The waves were huge. I reached the first bouy and looked around for my friend. Then I started to think about sharks and swam back as quickly as I could. Scary stuff!”

That evening Tsheli attended the race briefing, which scared the wits out of her. “There were so many rules; I couldn’t remember half of them. I went to bed filled with anxiety. I had a nightmare that as I emerged from the water, the referees were waiting and told me that I had been cut off. ‘Did not finish’ was written in bold letters next to my name. I woke up with my heart racing.”

Tsheli’s nerves were calmed by the enormous family support she received. “When I got to my cousin’s house where I was staying, I had my mom (Thandi), her two siblings (Uncle Victor and Aunt Nolwazi), her brother’s wife (Aunt Nana), my cousin Babs, my niece and nephew (Andulela and Esethu) and my son (Jemelle) all there ready to support me. Wow… how fabulous is that?”

RACE DAY
Though the swim was Tsheli’s biggest fear and she got cramps in her hands due to the freezing water, she remained calm and managed to make it out of the water just before cut-off. “When I got out of the water my mom was there with her sister, my uncle, and of course my son. He is so proud of me. Afterwards he said, ‘Mommy you are my best friend.’’

She found the cycling course very challenging. “It rained the whole way and was very windy. I struggled to the end and made it in the nick of time again. It was my slowest time ever on a bike! I am not sure where I got the energy, but I suddenly had the energy to run. I ran at a steady pace all the way, met a friend and we ran together to the finish. Crossing the finish line, I realised I was an Ironman! I finished the swim in 1:05; the cycle in 3:57 and the run in 2:11. My total time was 7:31:42.”

“I am so proud and happy. My family was waiting for me at the end. I did not care about time, just that I finished… and that I had made the swim. Out of almost 2700 entrants very few were black people and most just men! I am hoping in future more black kids will get involved in triathlons and experience the joy of this amazing sport, just as I did. Will I do the full Ironman on 10 April 2011? Watch this space!”