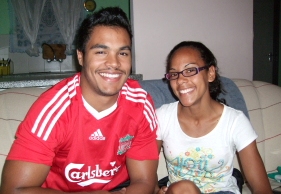 Fran grew up next to an athletics track, with her Dad being a high jump coach. She ran her first competitive race at the age of four, against the under-6-group. This continued throughout her school and university years, with the 400m hurdles becoming her specialist event.

Sport was most definitely in Fran’s blood and she completed an undergrad, Honours, Masters and PHD in Biokinetics. This woman has practiced as a biokineticist, fitness instructor, fitness manager, operations manager, club general manager, wellness manager and is currently the Product Training Manager for Virgin Active South Africa. It is safe to say, she knows a thing or two about fitness!

Due to a serious back injury and a prognosis of ‘you will never run again,’ Fran took about five years off running. But once a runner, always a runner, and she then attempted road running, up to distances of 21.1km. She did this without any real training and soon discovered that it is very different from the track. But Fran soon fell in love with road running.

LIFE-CHANGING MOMENT
In January 2009 Fran joined a 12-week 10km programme, but about three weeks into the programme she was diagnosed with Non-Hodgkin’s lymphoma. It was a huge shock, but also a relief, because it explained why Fran was always tired, it explained all the aching muscles, and also why she never really improved in her running.

For Fran it was tough completing the 10km programme in between chemo treatment sessions, but this is the time when people carry you through, and that is what her running mates did. To the horror of her oncologist, Fran joined the 21.1km programme – maybe to the horror of the programme leaders as well! She battled through and did the Knysna Half Marathon. Then it was time to take a break and focus on getting better, which did go according to plan, at least for a while.

About six months ago the battle started again when Fran was diagnosed with a tumour in the lung, which later spread to the brain and liver. She is currently undergoing treatment for this, but amazingly, Fran is still running! She has since completed several half marathons and even two marathons!

Fran firmly believes the reason why she is still in relatively good health is the fact that she continued running, maybe not as far or as often as she would like to, but she is still running! This is also one of the reasons why she selected MaAfrika Tikkun as the charity she would like to represent at the Virgin London Marathon. These healthcare workers take care of the terminally ill and orphans and cover huge distances on foot to deliver this invaluable service to the defenceless and sick.

THE NAVCHALLENGE
A group of Fran’s nearest and dearest pulled together and decided to assist Fran to raise the remaining R50 000. On 5 February 2011 at Oak Lane Farm, Grabouw, some of Fran’s friends hosted The NavChallenge, presented by Glider. The intention of this three-hour orienteering race, open to both mountain bikers and trail runners, was to assist Fran in raising these funds.

Emphasis was placed on having fun and enjoying the great outdoors whilst encouraging newcomers to give orienteering a try. It was a team event (two people per team) and competitors could compete on mountain bikes or foot. The goal was to locate as many of the checkpoints as possible in any order. Checkpoints were allocated a score depending on the level of difficulty to reach each checkpoint. Prizes were awarded to the top teams in each category, and on a lucky draw basis as well, as well as to teams raising the most funds through personal sponsorships.

To date almost R52 000 was raised. Virgin Active has agreed to match the amount, which means Fran Venter is on her way to make her dream come true!

THROUGH THE LOVE OF FRIENDS
“Fran is an inspiration. When I don’t feel like training or am going through a rough patch in a race, I think of Fran and she inspires me to carry on. She’s an amazingly strong person.” – Stacey Scott

“Fran is a role model to me. She has shown me how to face tough situations and how to cope with challenges which to me seem insurmountable. She has shown me patience with trials and teaches me to be a better person. She is my hero.” – Cath Coupar

Fran is a beautiful person, inside and out. She is humble, determined and exudes positive energy – such an inspiration! – Paula Pienaar

“Fran has shown me that whatever life throws at you, you never give up. Sometimes I think she is literally mad, but she carries on doing what makes her happy, and I think that is why she has been able to carry on. She never complains, she always has time to listen to my moans and groans, and she always has a smile on her face.” – Debbie Lillie

“I was very blessed the day I met Franciska. Since then I’ve got to know her as a person and she became a very good and special friend. She is an absolute inspiration and is always positive and encouraging. Her support for me during my knee surgery and recovery, there are no words. She is a truly amazing person. I’ve learnt a lot from her and continue to learn from her. Fran, you are an absolute inspiration. I wish you a wonderful Virgin London Marathon, enjoy it. Baie groete.” – Karen Ervens

RACE REVIEW ON THE NAVCHALLENGE – By Ansa Theron
The NavChallenge presented by GLIDER was organised by RaceInterface on a completely different format to all the other events I often enjoy in the Grabouw Valley. The NavChallenge was totally unique in function and structure.

The aim of the NavChallege was to assist Fran Venter to raise funds to participate in the Virgin London Marathon. I was touched and inspired as I read Fran’s story and her reasons for undertaking this journey. Very excited to support Fran on her journey, I entered myself for the NavChallenge. I soon realised this is not just a run or cycle event, this is a run or cycle while-you-figure out-your-own-route event.

Navigation is a skill you can learn, but I had no experience, so to my relief, I read that Michael Graz was giving a short course on navigation a few weeks before the event to help the lost souls like me. After the course I felt ready and eager with my compass, bright marker and sense of humour to take the bull by the horns.

The event works as follows: Two members in a team must navigate themselves to different checkpoints, scattered all around the Grabouw Valley. Each team can decide if they want to run or cycle (both off-road). At registration on the morning of the event each team receives a map of the Grabouw Valley with the different checkpoints. Each checkpoint has been allocated an amount of points ranging from 10 to 50. The more difficult and further away from the start point, the higher the points allocated to the checkpoint. Each team receives their disclosure card seconds after they begin the race. The points allocated to the different checkpoints are indicated on the card. Teams then decide on the route they will take, and are penalised if they do not return within three hours.

All the above sounds pretty straightforward, but at the race briefing we were told we will probably get lost at least once (we did). Then again, were also told we will have fun (definitely) and we will each get a beer, sandwich and a pair of polarised GLIDER sunglasses at the finish. Talk about motivation!

All the teams (bikers and runners) started five minutes apart, to prevent teams from following each other. The atmosphere at the start line was buzzing with excitement – maps, compasses and a few confused faces.

My three hours out in the Grabouw Valley were hot, but fun. We only managed to get four out of the eight checkpoints. Each one was identified by a bright orange and white flag and equipped with a clipper to pierce your control card as proof that you were there. Every now and then an enthusiastic team would fly by from some random direction on their way to one of the many checkpoints.

One little incident with a Cape Cobra had my heart rate monitor beeping out load. My race partner was running in front of me on a single track in the pine forest when he almost stepped on the big boy. The Cobra lifted itself and aimed its flattened head at me, stopping me in my tracks. My race partner, unaware of the cobra less than 30cm away from him, continued up the path, while I slowly walked backwards. After a while, the cobra lowered itself down and sailed away – a magnificent site!

After we finished, we each received an ice cold coke, a beer and a delicious sandwich. Our goody bags were filled with toys, vouchers and a very funky pair of sunglasses. At the prize-giving, Fran spoke a few words and thanked everyone for participating in the event. Prizes were awarded to the top teams in the male, female and mixed team categories. Then the organisers surprised us by rewarding the last teams in each category with a nutritional hamper from High-5, a little something to get them going faster next time. Stunning lucky draws had everyone holding thumbs.

All in all, the event was well organised, with a great atmosphere. My eyes will be on the calendar for the next NavChallenge.

Those who want to donate can visit the website http://uk.virginmoneygiving.com. Donations will be open on this site until 17 April.