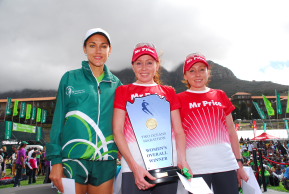 Adinda stunned the running world at Two Oceans last year when she finished just behind the Russian Nurgalieva twins, crossing the line in a PB 3:49 to claim third position and first South African home. In the process, she smashed more than 10 minutes off her previous best time. Even more amazingly, she finished only eight minutes behind the formidable twins, who have dominated the women’s races at Oceans and Comrades for years.

For Adinda, the outcome was especially enjoyable because no-one expected her to do so well. “I wasn’t even at the pre-race press conference. I had a quad muscle tear a few weeks before the race, so I didn’t know how it would hold up, but after 10km it felt fine. I had a relaxed run and even met friends along the road. I remember feeling strong going up Chappies and realising I was the fifth woman. I had decided beforehand I wanted to go for third position and started to make my move going down Chappies. As I ran into Constantia I could see the fourth girl about 100m ahead of me, and I caught her just before the top of the climb. I raced hard in the last 12km because I didn’t know where the third girl was, but I caught her about 5km from the end. From there, I just had to stick it out. I remember coming on to the field, I couldn’t believe I was third! It was amazing how everything just went according to plan, in spite of the quad injury.”

After performing so well at Two Oceans, she had high hopes for Comrades 2010, but things didn’t quite go to plan. She picked up the flu before the race and recovered just in time to line up, but struggled all through the race. “I can’t tell you what it feels like to see the sign that says there are still 80km to go and already be feeling tired and sore. I have never prayed so hard in my life. The doctor told me afterwards it was probably the flu that caused my problems. I was very disappointed.” She still managed to cross the finish line eighth in 6:51, but it was way slower than her ‘down’ run PB of 6:38, set in 2007.

A LOVE FOR ALL THINGS SPORTY
Adinda’s love for running and sport started at a young age. During primary school in Newcastle she discovered cross-country and loved it. Though she fell and finished stone last in her first 1200m race, the seven-year-old Adinda picked herself up and couldn’t wait for the next race. “I tried everything: running, hurdles, high jump, even shot put. I was never any good at shot put, but I kept going back, because it was so much fun.” After school she studied Biokinetics at Potchefstroom and didn’t pay too much attention to running. She only ran socially and played some hockey, but says she focussed more on her studies and the social life that goes hand-in-hand with sharing a house with seven friends!

Then came 2000 and her first Comrades. “A friend persuaded me to enter Comrades. I only started training at the end of January and had no idea what I was getting myself into!” When she lined up for her first ultra she had only ever run two marathons, one to qualify and another as part of her training. “I did no quality training such as hills or strength work. I remember reaching the bottom of Inchanga and looking up to see the people running in the mist at the top of the hill. It looked so high it seemed as though they were in heaven, and I had to stop to gather enough strength to take on that hill. Hopefully, when I get to that stage this year, it won’t be as intimidating!” Nevertheless, she still reached her goal on the day and earned her first Bill Rowan medal.

Three years later, in 2003, she took on her second Comrades and finished in 8:03. Then in 2005 she was back, this time improving her time with almost an hour (7:08) to win her first silver. Since then Adinda has soared, winning two gold medals in 2007 (ninth position) and 2010 (eighth). Her progression at Two Oceans has been just as impressive with a bronze, a Sainsbury and two golds since 2005.

A BIG YEAR
Adinda decided to give Oceans a miss this year to focus solely on Comrades. She is taking her training and preparation so seriously that she will be leaving the joint medical practice where she works about four weeks before the race to make sure she doesn’t pick up any bugs from the patients.

Still, she remains humble about her goals for Comrades. “The only thing you can really hope for is that your preparation goes well and that you get to the start of the race without any injuries. I want to finish the race and say that I enjoyed it. Last year was an awful race, I hated every moment, so I decided I have to go back this year to at least be able to say I enjoyed my race. Of course, improving my placing at Comrades will be wonderful, but all I really want to do is improve my time. I will be ecstatic if I can improve my PB, even if my placing is lower.”

RUSSIAN DOMINATION
Though she has a lot of respect for the twins, Adinda says it is possible to compete with them. “I don’t think it is impossible for a South African to beat the Russians, but I think the fact that they run full-time and don’t have to work helps them a lot. They have so much more time to train and recover. I won’t go out and race them from the start, though, because they put in faster and slower spurts. You have to run your own race against them.”

That’s one of the reasons why Adinda’s training this year has included more track sessions, so she can improve her speed. Her usual weekly training includes two track sessions, two long runs, one hill session and two gym sessions, averaging about 130-150km a week. As Comrades approaches she will drop a track session and increase her mileage to approximately 180km a week for about six weeks.

Adinda doesn’t have a coach, as her training as a biokineticist allows her to work out her own training programmes, but she admits it isn’t ideal to train without a coach. “It’s sometimes difficult to train without the feedback you get from a coach. When you’re tired, you don’t always know if your body really needs some recovery time, or if your mind is just being lazy. I’ve learned to listen to my husband when he tells me to take it easy, because he is usually right when it comes to that.”

FINDING A BALANCE
Though it sounds nice to not have to work and to be able to train all day, Adinda says it’s important to keep a balance in life and not just focus on running in your life. “My husband might say running means too much to me, because if I can’t run I get depressed. To me, running is like the air I breathe. But I have realised you cannot allow running to rule your life, you have to have a balance. Running can’t become your god; that’s not why you’ve received the talent. It has happened to a lot of people and it has happened to me too; I’ve fallen into that trap about three times and I had to learn the hard way through injuries that I had to find a better balance.”

Adinda says that the best, fastest and strongest runners do motivate her, but this is not where she finds her main inspiration. What gets her out of bed and inspires her is thankfulness. “I know this is just a God-given talent and you have to use your talents and develop them. You can’t hide them, because you never know when you’re going to lose them. My mother-in-law had a stroke a couple of years ago and even though she now struggles to walk and can’t use her one arm any more, she is still so strong and grateful for what she has. That inspires me. Not always the best runners, but normal people like my mother-in-law, my husband and the back-of-the-pack runners on Comrades day. They run just as far as I do, but they’re out on the road, in the sun and on their feet for up to 12 hours. I don’t think I’d be able to do that!”

THE FUTURE
For the next year or two Adinda plans to keep on running and improving her running, but a family is also on the horizon. “My husband said he’ll stop running the day I beat him, so I’m training hard to beat him so he can look after the kids when I go running,” Adinda chuckles. “I’d also like to give something back to sport one day when I have a family and am more settled. I’d like to help others by coaching, writing training programmes and helping injured people. When you’re running competitively everything is about you, so I would like to give back at some stage.”

“I don’t think I’ll ever stop running. I might just run a little slower when I get to the point where I’ve achieved everything that I wanted to. It was always so much fun to run more towards the middle of the field, everyone is so friendly and having fun, so I’d love to go back and run there again.”

But for now, it’s all about Comrades on 29 May and improving that PB.