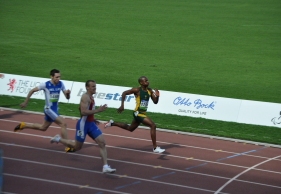 More than 1000 athletes from 70 countries headed to Christchurch for the IPC World Athletics Champs, which is the last major international gathering of athletes before the London 2012 Olympics kick off. A massive number of 57 world and 173 championship records were broken during the meet, across the many classes and categories that disabled athletes compete in, showing how high the standards of competition were.

China, who had the biggest team at the championships, went home with the biggest medal tally, a healthy 58 medals made up of 21 gold, 22 silver and 15 bronze. Russia finished second on the medal table, with Great Britain third. The Brits did not win as many gold medals as the Russians, hence finishing third, but their overall medal tally of 38 had them second only to China. The South African team’s haul of 25 medals, including nine golds, put them seventh on the table, out of 45 countries that medalled.

BLADE RUNNER LEADS THE WAY
Leading the South African charge was Oscar ‘Blade Runner’ Pistorius, with three gold medals and a silver. He claimed his first gold in the Men’s 200m T44, leading from start to finish to clock 21.80 seconds and beat archrival Jerome Singleton of the USA by nearly a full second. South Africa’s Arnu Fourie claimed bronze in this final, coming home in 22.82, taking more than half a second off his previous best time and only just missing out on silver by 0.05 seconds.

Singleton then reversed roles in the 100m final, diving for the line to beat Oscar in a photo finish as they both recorded relatively slow times of 11.34. The South African got back to winning ways in the 400m, clocking a championship record time of 48.37 despite blustery conditions, but all he could talk about was the cherished T42-46 4x100m relay later that afternoon. “We have four runners under 11 seconds, and despite a bad draw, I am confident for South Africa.”

Well, Oscar needed every metre of the track to run down Singleton as the rivals anchored their teams home, the Americans in the inside lane and the South Africans in lane eight. The Americans gave Singleton a slight advantage at the final change and with 40m to run he still held the advantage, but Oscar’s famous kick saw him win by a head in another photo finish. The South African team of Samkelo Radebe, Henry Roos, Arnu and Oscar also set a championship record of 42.80, just 0.5 seconds outside the world record held by the Americans, and their wild celebrations after winning showed how much this one meant to them.

MATIES-HELDERBERG CLUB EXCELS
Eleven athletes from the Maties-Helderberg Sport Club for Persons with Disabilities, at the University of Stellenbosch were in the SA team, and they brought home 11 of the team’s 25 medals, says Wentzel Barnard, Sport Manager of the club and himself a well-known disabled sportsman. This included double gold for Ilse Hayes in the 100m and the long jump, gold for Hilton Langenhoven in the pentathlon, and a gold for Arnu Fourie as part of the victorious 4x100m team.

Ilse’s win in the 100m was particularly sweet, as she not only set a new championship record of 12.49 in her T13 class, but also moved to the top step of the podium after winning silver in this event at the 2008 Beijing Paralympic Games. She also took bronze in the 200m final, while Hilton added a long jump silver to the haul. Also amongst the medals were Fanie van der Merwe, who claimed two silvers and a bronze over 100m, 200m and 400m respectively, Jonathan Ntutu, who won silver in the 100m, Arun? Liebenberg with silver in the 400m and Zanele Situ with bronze in the javelin.

Another notable performance from a Maties-Helderberg athlete came from blind runner Jan Nero. He is well known on the road running front in the Western Cape, but only recently turned to the track. After two years of hard work, he was selected to compete in the 5000m in New Zealand, where he finished a commendable sixth in his first international final in 16:11.66, being led by his guide runner Duane Fortuin. Earlier he had finished second in his qualifying heat.