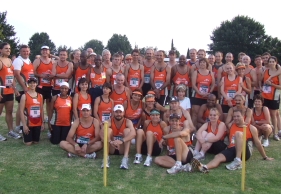 Founded in 1989, the history of ArcelorMittal Athletics club has developed hand-in-hand with its main sponsor and namesake, ArcerlorMittal South Africa. What started as a small track and field and road running club with mostly elite athletes in the golden years of South African track and field, has grown over 21 years into the biggest running club in the Vaal Triangle. Though the majority of members are now road runners, the club also caters for short and middle distances, cross-country and walking events.

BACK IN THE DAYS
In 1989 the club was established as the Iscor Athletics Club, with athletes such as Dries Vorster (SA 400m hurdles champion in the 90s), Zelda Pretorius (former SA 800m record holder) and Jean Verster (Springbok 2000m and 3000m athlete) ensuring that the club was a force to be reckoned with. Their awesome performances on the track led to great publicity for the steel giant.

When Iscor started operating under the name of Mittal Steel Company in 2004, the club followed suit and changed its name to Mittal Athletics Club. Then, in 2006, Mittal and Arcelor merged to become one of the largest steel manufacturers in the world, and the club’s name was changed once again. Today, the club has 265 members.

TIME TRIALS
The current clubhouse at the Quest Conference Centre has been the club’s home for the past 17 years. The club’s time trial takes place here every Thursday, when between 30 and 40 athletes line up to take on the 2km loop course, which they can do up to four rounds of for an 8km trial, depending how they feel on the day. Of course, the highlight of the time trial is the opening of the bar afterwards, and most stay behind to catch up and exchange running tales while a club braai is held every first Thursday of the month.

The weekly time trials culminate annually at the last time trial of the year with an Ice Cream Time Trial, where members walk as a group to the nearby Vaal Mall, buy an ice cream and walk back to the clubhouse. This creates an ideal opportunity for non-running family members to join as well.

ANY EXCUSE TO PARTY
The club’s grey and orange ArcelorMittal gazebo appears at most races, but at the Cape Gate Vaal Marathon and the SASOL Marathon, the gazebo is sure to be standing a little longer, as the club has made these two local races special ‘club runs’ where members stay to enjoy a braai and share ‘war stories.’

Come Two Oceans and Comrades and the club committee ensures that members are well looked after. “We have bus trips organised especially for all those members who toil away on the road every day, but can’t afford to fly to the coast or drive on their own,” says Malie van der Walt, club secretary and busy-bee of note. Now imagine a 60-seater bus, filled with club members (and their families) who like to party and you have 16 hours of fun on the N1 between Gauteng and Cape Town. During the Two Oceans weekend, club members stay in the hostel of the Rondebosch Boys High School and don’t think they just run Oceans and go home. No way! Members make time for some sightseeing to compare the views of the Vaal River to that of the Atlantic Ocean.

And of course, there is the obligatory braai after the race and very often a spontaneous game of cricket is played in the corridors of the hostel with a tennis ball and a shoe serving as bat. “This is probably the highlight of our year and we have so much fun that everyone wants to join the tour,” says Malie.

Other social highlights include the club’s pre-Comrades function, the Aches & Pain Party after the Big C, and of course, the year-end function. For the past 17 years the club has also been hosting its own 500/1000km Challenge. At a special Challenge prize-giving function, those members who have not run the required distance receive a ‘kierie’ with their name on it. Owning a ‘kierie’ is definitely not an honour and some members are so determined to make sure they hit the 1000km mark the next year that they even run time trials and races in the rain, says Malie.

GIVING BACK
It’s not all just fun and games, and the club members are passionate about development and giving back to the sport. They regularly organise races and help with development in the area. The club hosts the VUT 15/10/5km night race, the Lite2Nite, a 12-hour circuit race in conjunction with Nedbank Running Club, and the BASF 90.6 32/21.1/10km road race. These races, all held in and around Vanderbiljpark, are well supported every year and club members make sure they pull out all the stops to make the events a success.

Malie jokingly refers to the “same stupid eight” club members who are always available when they are needed. Corrie Botha, Schalk Engelbrecht, Pieter and Christa Mans, Elize Kempen, Mike van der Walt, Heloise Olivier and Malie are the club’s trustworthy souls who handle the club’s administration, second their runners and organise water tables, social events and help to audit the 1000km Challenge, to name just a few of their responsibilities.

Club members work hard to help identify and develop new runners and for this reason they organise at least one cross-country development race every year in Sharpeville. Anyone can participate, and everyone gets a medal, while local coaches keep an eye out for new talent. Within the club they have their own development officer, Joel Maope, who together with other members, get the opportunity to learn from the current club management how to organise races and handle club administration, and in so doing learn how to bring running to more people.

MEET THE ELITES
Besides top track performers such as Dries, Zelda and Jean, the club has had several top road athletes over the years. SA Marathon record-holder Gert Thys, Olympic marathoner Jan Tau and 2003 Comrades winner Fusi Nhlapo all started out at the old Iscor club, as they were employees of the company before turning professional. In fact, Fusi still holds the record for the club’s 8km time trial.

Today, the elite runners are generally grabbed by bigger corporate clubs, but the club still boasts a strong contingent of runners, including Mari Bruwer, Florence Molawa, Jappie Kgotle and Petrus Tsotsetsi. Mari is not only the top female runner in the club, but also received the prize for the best overall athlete of the year in 2010, while Petrus Tsotsetsi walked away with the award for the best male runner. Florence Molawa was awarded cross-country athlete of the year. Other members who have performed consistently over the years include Louis Harmse, who has 22 silver Comrades medals, while Alf Gloy, Louis Gerber and Martha Squirra have all completed 20 or more Comrades.

Malie emphasises that each and every member is special at ArcelorMittal and everyone contributes to the club’s spirit and making it such a special place, but there is still one member that is seen by all as integral to the smooth running of the club, and her name is Tannie Ans Schoeman. She is the club’s bar lady and probably the most popular member thanks to her position, chuckles Malie.

A SPECIAL PLACE
There aren’t many clubs that can boast of members staying loyal for more than 20 years, but that is exactly what ArcelorMittal has achieved. Twelve of its members have been part of the club since its inception 21 years ago, and it is clear that this must be a special club.

“We have the nicest people as members. We stand together and support and trust each other, and not only when we are on the road. Even in our personal lives we have had to help a few members through some difficult times and every time, everyone just chips in and does their part to help a fellow club member. On the road there is always someone that will motivate you to keep going that little bit further. There is always someone to train with, and even if you don’t feel like training someone will always convince you to join them for a run. You are never alone,” says Malie.

“We are a loud bunch and there is always light-hearted banter between us, but that’s what makes this the best club… the people. Never in my life will I join any other club.”