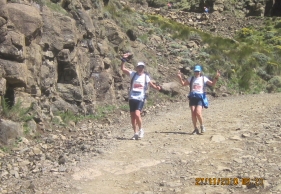 I took on this expedition with my good friend Lissa Parsons and our primary objectives for this race were to have fun, enjoy the scenery, to finish and to be able to walk without too much residual ‘staggering’ the next day. Wow, I can honestly say that we were fortunate to achieve all but one of these…

RACE MORNING
The heavy rains from the previous night had fortunately ceased and a blanket of cloud covered the mountains in the distance. Leaving the start at the Sani Pass Hotel, I had a sombre moment or two, where I realised that this was going to be tough. Luckily the moment passed quickly and I realised this was actually going to be truly memorable.

The first 14km to the border post were relatively easy going, water points were well stocked with water, coke, Energade, bananas, sweets and chocolates, and all the helpers were friendly and exuberant. In a couple of places, rivers flooded over the road and we needed to cautiously navigate our way across on precarious rocks. Arriving on foot at the border point between Lesotho and South Africa was an enormous milestone; firstly as we were stepping outside of South Africa, without a passport, and because this is the point that the meandering pass comes into sight and looms above you. The border post is at 1968m above sea level and marks the start of the real climb.

THE REAL CLIMB STARTS
Usually, seeing runners far up a hill (the steepest you’ve ever seen) in the distance is never a huge motivator but looking at the beauty embracing them revitalised our legs and added a new bounce. About 2km up the road was another of the fantastic Sani Stagger water points. In order to arrive there, however, we did need to cross another river where it was almost impossible to avoid getting wet. A couple of runners took the opportunity to remove their shoes and refresh their feet before continuing; others ran straight through with their shoes on.

Although forced to walk for most of the way to the top after the water point, the slow and steady pace allowed us to appreciate some of the most breathtaking scenery in South Africa. At the 3km to go mark before the turnaround at the top, our ‘slow and steady’ pace became… um, slower and less steady, as the road became incredibly steep and rocky. As we ‘summitted’ the pass, with great relief, it was astounding to see the half moon still so clear against the morning sky.

RECEIVING OUR BRACELETS
Then, with our coveted bracelets firmly on our wrists, proving that we had indeed painstakingly reached the top, our downhill journey back to the Sani Pass Hotel began. Running past those still on their way to the top provided an odd sense of relief that we were on our way ‘home,’ that the worst was over… but this was still a marathon, and there were still 21km to go.

With the sun higher in the sky it started to get hot, but the kilometres kept ticking slowly over. While keeping a careful watch on the placement of our feet, it was amazing to see water oozing out of the rocks in the distance and reflecting the warm sunlight. Waterfalls are in abundance here and it was very tempting to veer off for a quick dip, just to cool down.

The cooling rivers felt fantastic on our feet and this time, little caution was taken in keeping feet dry. Huge thanks and appreciation must go to helpers at the water table about 10km from the end. They were set up next to a river and were pouring cups, no buckets, of water on any runner requiring a cool-down. Definitely one of the highlights!

It was down to the last 5km to go, and those who have run marathons before will know that this is never a pleasant stage, but with so much beauty surrounding us, our pain was all but forgotten. The finish line was a bitter-sweet moment as our journey (for 2010) had ended, but wow, the relief to complete this run was immeasurable.

Our final objective of being able to walk the next day without too much residual ‘staggering’ was impossible to meet, but the secret smile shared with those walking in the same manner was definitely