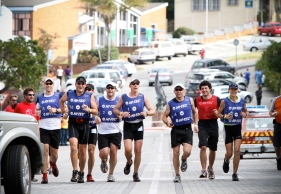 I always wondered exactly what this ‘Southern Storm’ was that everyone was raving about – and what did one need to survive it? Well, I quickly realised you need a strong pair of legs, a heart for the outdoors, and most importantly, a head for a six-day race where you cycle a total of 190km and run 84km, with the real challenge being the 8500m of accumulated climbing! Held each year in September, the race follows a new path every year, and participants are accommodated in tented camps which are moved daily. Each day comprises one or more legs of 4km to 42km of running and/or 10km to 100km of riding.

A PICTURESQUE START
Day 1 kicked off with a 5km prologue run in the picturesque village of Nature’s Valley. The idea was to mimic what you would experience on the Otter Trail the next day, so we were running over hills, rocks, rivers and beach sand. Depending on your finishing time, entrants were then grouped into starting batches of four, with 30-second delays in between, to avoid congestion at the start of the next day’s 42km run.

Day 2 arrived with soft rain and cool temperatures. There was only one refreshment point at the 30km mark, which meant entrants had to be self-sufficient. The profile of the Otter resembles that of a comb: You are either going steep up or steep down, unless you’re crossing a river. It is relentless! We climbed 2500m in those 42km! The big obstacle of the day was crossing the Bloukraans River. The chilly water was waist-high with some waves pushing in, but there was a rope to guide us. It took me six hours to get to this point and with only 12km to go, I was optimistic that I might break eight hours. But the hills were never-ending and it took me another 2:19 to finish. While most of us were happy with any time under 12 hours, the winner and four other ‘mountain goats’ finished in sub-five hours!

PUSHING ON
After a hearty breakfast and briefing, we set off on Day 3 with a 50km ride that started with a steep 3km climb out of Nature’s Valley. The forest tracks were hard work, but the scenery was breathtaking. Naturally, ‘strategically placed’ roots and rocks really tested our sense of humour, and there were compulsory ‘hike a bike’ sections where we had to carry or push our bikes through ravines.

We ended the stage on the stunning private resort of Forest Hall, where a tent and thin mattress were such a welcome sight. We enjoyed lunch around the pool, allowing the legs to recover a bit before the afternoon 8km run. This sounded quite simple, so imagine my shock when within the first 1km my legs did not want to do what my mind was telling them to. Somehow I forced them into motion as we made our way along the cliffs overlooking the ocean. What an amazing view! Unfortunately, reality struck when we had to wind our way down to the beach and slog through a tough 2km section before heading back to Forest Hall.

By now most of us were realising the true difficulty of this race, and to quote a fellow competitor, “This makes Ironman look like a gym session!” My legs didn’t feel like they belonged to my body, and we had three more days to go and the toughest was still to come!

TOUGH, TOUGHER, TOUGHEST
Day 4 was special in that it involved a boat trip up the pretty Keurbooms River before we were dropped off on a small beach. We negotiated our way up the stunning Whiskey Creek before exiting up what felt like the steepest climb yet! Next, the 40km bike stage took us around Keurboom’s plantations for some exhilarating riding back to Forest Hall. Thank goodness for another great meal and massage before the biggest day yet!

This next day’s 11km ride, 6km run, another 60km ride and finally a 8km run was arduous on its own, let alone with the 2110m of climbing! Much of the day’s route included the well-known Knysna Forest mountain bike route as well as stunning riding in the Harkerville Forest. One would be hard-pressed to find more awesome riding and running trails.

With 25km of cycling to go, I worked out that I had an hour to make the cut-off. Time was against me and I arrived 45 minutes after cut-off, so imagine my surprise when I was asked at the transition area if I wanted to continue on the run! The cut-off had been extended, and I had to quickly tell my body it wasn’t over yet! I was the last athlete on the course and was accompanied by the ‘sweeper’ runner who removed the direction arrow boards as we progressed. This run was the most scenic for me, especially when we ran alongside a waterfall down to the coast. Not even the horridly steep climb to the end could dampen my elation. I felt like a true champion.

WHAT AN AMAZING FINISH!
The final day saw us making our way back to Keurboom River where we enjoyed the easiest of our rides (25km) before heading to the pretty town of Plettenberg Bay and the final run leg around the magnificent Robberg. Finishing this awesome challenge was, without a doubt, one of the highlights of my life. I have done many other multi-day races, but this one is a notch above the rest!