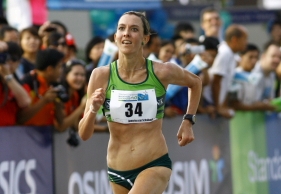 After resting for six months because of a serious injury, I returned to competitive running at the SPAR Ladies Challenge in Pretoria last year. I finished fourth there, and also fourth in the Durban and Johannesburg legs of the series. Shortly after that, with the help of my coach, Dan Muchoki, I secured an invite to compete in Singapore, which was a wonderful opportunity, as I am not well-known there.

Looking back, even though the experience was stressful, I loved every minute of it! There was a very strong line-up and I was concerned about the weather forecast for race day, as we all know how hot and humid it can get in Singapore. But I am thrilled with my 2:35 performance, especially given it was my first competitive effort over this distance.

FAST START
The first 10km of the race were extremely fast with a bunch of Russians running like pacesetters at the front of the field. I kept up with them initially, but after the first 10km I decided they were running too fast for me and I fell back to a more comfortable pace. At the 26km mark, the leading group started spreading out and I passed some of the Russians. As the race progressed, I caught all but one of the other runners and with 6km to go I thought I might be able to catch the leader! In the end she was too strong for me and in the last 100m the Ethopian, Ayelu Geda, also caught up with me.

Sprinting to the finish I realised I am not a 100m athlete, and in future I will have to work on finishing stronger. I eventually finished one second behind the second-placed Ayelu in a time of 2:35:33. The Commonwealth Champion Irene Kosgei crossed the line as champion in a time of 2:35:22.

RESTRATEGISING
Although I wanted to run a 2:30 marathon, I wasn’t exactly sure how to approach the distance, as this was the first time I ran a marathon competitively, so I am pleased with the time I managed. I believe that with a few more marathons under my belt and more experience, I will keep improving and reach the 2:30 milestone soon.

What helped me during the race was the fact that I believed in my ability to achieve my goal, as well as the support I received from my coach and my husband, for which I am very thankful.