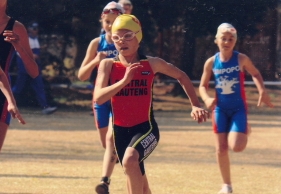 When most 10-year-olds are naughty and need to be punished, they are sent to their rooms, or not allowed to see their friends for a week. But in Melissa Glenn’s case, her parents need to use a whole different tactic; they tell her she is not allowed to go for her daily running session. And this breaks Melissa’s heart, because at the tender age of 10, running and swimming have become her two greatest passions in life.

She recently competed in her first international Biathle (500m run, 50m swim, 500m run) race where she made her parents, school and above all herself very proud by placing fourth in the u/10 category at the Biathle World Championships held in Dubai on 30 October. Not only was it the first time she swam competitively in the ocean, it was also the first time she faced fierce international competition from youngsters from countries such as Great Britain, Egypt and Spain. She was the second-youngest competitor at the event, with the youngest competitor only being one day younger.

NATURAL TALENT
Melissa started swimming when she was in nursery school and only got involved in biathle after one of her sisters, Courtney (13), participated in the sport. The sisters reversed roles and soon Melissa was hooked on biathle while Courtney decided to take a break from competition. Their youngest sister, Chelsea (9) also tried her hand at biathle and was very good at it, but did not take as well to the training as Melissa, who loves every second of it.

The girls’ parents, Lee-Ann and Gavin, have never put any pressure on any of their daughters, and allow them to choose whatever sport they love doing. This is probably one of the reasons why Melissa has excelled. In 2009 she participated in her first SA Biathle Championships and finished 13th in her age group. Last year she improved in leaps and bounds and finished second!

TRAINING PASSION
Be it swimming or running, Melissa loves both. Whenever you are at the local time trial in Benoni, you are sure to find a petite blonde runner who will most likely pass most people on the 4km route. Melissa, who attends Summerfields Primary School, blitzes around the course in a time of 18:42 – not bad for a 10-year-old girl.

She trains four days a week with running coach Richard O’Donoghue and also participates in athletics and cross-country at school. At the end of last year, she walked away with a whole bag of trophies at the school’s year-end prize-giving. “Melissa loves running and often asks us to drop her a few hundred metres from our house so she can run back home. The neighbours probably think we are slave drivers,” chuckles her dad Gavin.

SPORTING DREAMS
Melissa will move up to the u/12 age group this year and is hoping to get another chance to participate at the World Biathle Championships, which will be held in Monaco later this year. Her swimming hero is Natalie du Toit and one day when she is a bit older, she would love to do triathlons, says Melissa. She is keen to start trying her hand at the Energade series soon.

“It’s strange how many parents of children who do biathle actually end up getting involved in triathlons themselves, as a lot of the biathletes move on to triathlons,” says Lee-Ann. Gavin then adds “I would love to get involved in triathlons with my kids, but I am a bit scared of the swim! It would be great to do some sporting events as a family.”

“We are so proud of Melissa. She puts so much effort into her sport and we admire her for that,” he continues. “We are proud of all our children and believe they must choose the sport they love. We don’t want to push them. When they find what they love, they will do well at it.”

BIATHLE WHAT?
Even though Prince Albert from Monaco is a huge Biathle fan and competitor himself, biathle is not that well known. In short, it comprises a run and swim, and while distances vary for different age groups, all distances are kept short. Locally, most swims are in pools, while internationally competitors swim in the ocean. Biathle is seen as the breeding ground for Modern Pentathlon, which is an Olympic sport.