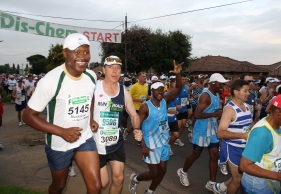 The Dis-Chem Half Marathon, hosted by Bedfordview Country Club, celebrated its 10th anniversary in January, and it was done in style! The race was superbly organised from start to finish and it was clear why this race is known as Gauteng’s Premier Half Marathon. The 5000 available pre-entries sold out well in advance to race day, while close to 1500 runners entered the 5km dash, which meant there was something for everyone on the day, from the elites to the Average Joe’s to excited children.

One of the highlights of the race was the many elite runners it attracted, which made for superb racing and excellent times being set on the day. Top honours went to Xolisa Tyali and Irvette van Blerk, both from the Nedbank Running Club, as they won the half marathon in times of 1:07:11 and 1:16:28 respectively. While Xolisa finished only 40 seconds ahead of second-placed Shadrack Hoff, Irvette seems to be increasing the gap between herself and her fellow female runners as she finished almost seven minutes ahead of her closest challenger, Mpho Mabuza. This was Irvette’s fourth Dis-Chem victory, her third in a row, and a new course record!

For most runners the 2011 race was a good indication of their fitness levels and what they could expect in their build-up to their different goals. Modern Athlete was at the finish line to find out how some runners experienced the race.

Carey and Adam Teasdale (5km)
The course was nice and not too difficult, though I had to walk quite a bit because of the pram I pushed! All in all it was a good day and we enjoyed it.

Munto Khanyile (21.1km), 1:32:27
The course was a tough nut to crack because it was a route where you had to keep pushing the whole time.