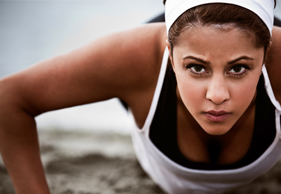 The pictures of models wearing them are quite inspiring; most have beautiful long, lean legs and firm butts that would make any woman rush into the shop to buy a pair of these shoes. After all, why sweat it out in the gym or on the road when you can get a beautiful body just by wearing a pair of shoes.

ALLEGED BENEFITS
The common denominator is that all these shoes have an unstable sole design, which forces the wearer’s body to constantly struggle to find equilibrium or balance. Some of these shoes have rounded sole designs, while others have 1cm-diameter pods built into the forefoot and heel. Most of the shoes have extra cushioning to alter the wearer’s normal walking gait, and the manufacturers promise:
• Destabilisation of the feet to create continuous leg muscle tension.
• Increased leg, calf and gluteal muscle activity.
• Improved posture.
• Barefoot walking gait mimicked.
• Improved muscle tone.

Some people who have used these shoes swear by them, while some manufacturers claim you will perform up to 28% better for no extra effort. But many experts just don’t agree.

PUTTING IT TO THE TEST
Scientists from the Exercise and Health Programme at the University of Wisconsin, La Crosse in the USA, recently studied these types of shoes. The study was funded by the American Council on Exercise. To test the effectiveness of the shoes and evaluate the manufacturers’ claims, the researchers evaluated exercise responses to walking in traditional athletic shoes versus the toning shoes. A second study evaluated muscle activation when walking in regular athletic shoes compared to toning shoes.

For the first study, the researchers recruited 12 active females, aged between 19 and 24 years, and they all completed a dozen five-minute exercise trials in which they walked on a treadmill for five minutes wearing each type of shoe. To measure muscle activation, the researchers recruited a second group of 12 females, aged between 21 and 27 years, who performed a similar battery of five-minute treadmill trials rotating shoes at random. Researchers recorded muscle activity in six muscle areas: calf, quads, hamstrings, buttocks, back and abs, as subjects walked in the different shoes.

THE RESULTS
Across the board, none of the toning shoes showed statistically significant increases in either exercise response or muscle activation during any of the treadmill trials. The researchers found no evidence to support the claims that these shoes will help wearers exercise more intensely, burn more calories or improve muscle strength and tone.

“We tested Rate of Perceived Exertion (RPE), which is basically how hard one is working, as well as oxygen consumption, how much oxygen you take in versus being at rest, and caloric expenditure, and we found no significant difference between any of the shoes,” says researcher Stephanie Tepper. “Of course, you feel different when you’re walking on probably an inch worth of cushioning. When people first wear them they’re probably going to be sore because you’re using different muscles. But if you wear any sort of abnormal shoes that you’re not used to wearing, your muscles are going to get sore. Is that going to translate into toning your butt, hamstrings and calves? Nope. Your body is just going to get used to it.”

With that said, some podiatrists believe there are certain circumstances in which this type of footwear may be beneficial. Individuals who have arthritic changes or restrictions at the ankle joint or the big toe joint may well benefit from a shoe which allows the body to pass over the foot in a more fluid manner, as less joint movement is generally thought to be required. They may also provide some relief for those with plantar fascia or heel pain – as any shoe with a raised heel has been shown to reduce the tensile loads in the plantar fascia.