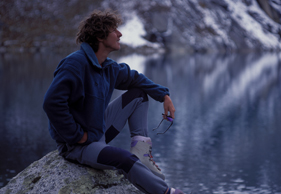 If you have ever loved someone, you will have thought about that phone call. You know the one. Will it come in the middle of the night, in the foggy space between dream and reality, or during the day while you are washing the dishes, or rushing out the door? Will it be expected after a long fight with a disease, or will it be sudden, like when you stand up too quickly? What will you say into the phone? What will your body feel like?

My phone call came on the 8th of April, and it was a rare day that I was not expecting it. For 12 years I had expected that phone call. Bob spent all his beautiful, vital energy running towards death. Testing it, toying with it. He jumped out of airplanes and even off a bridge with a parachute. He solo climbed the biggest mountains and hardest routes in the Southern Hemisphere, cycled across Africa, and drove his small, sleek car too fast down the N3 to get home…

And so I waited for that call. I rolled it around in my mind, and thought I knew my reaction, but when it came, the breath got stuck in my throat, and suddenly I was outside of myself. My teeth started chattering. I felt so cold. Nausea washed over me in breathless waves and my only instinct was to run, and run, and run. And never stop. It wasn’t really the desire to run away, but the pursuit of pure movement, of tasting the elements, and testing the pain. That first day, I ran up Chapman’s peak drive. I only managed an hour and a half, but it was pure and clear, and it exonerated my grief. The weather was perfect. Cold biting wind and stinging rain.

SOUL MATES
Running has been part of my life since I was six years old. I wanted to complete the school cross-country race, so I started running. I discovered the perfect escape of running solo. I was never particularly fast or brilliant, but maybe my talent has been a mixture of a macabre high pain threshold, and pure determination and discipline. While pushing the boundaries of my music and art career, performing around the world, working with my band Naked, and living a bit of a rock and roll life, Bob nonchalantly strolled in and instantly stole the show.

It really was love at first sight, corny as that sounds. From the moment we met we both knew we had found our soul mate. We had one date, canoeing in a thunderstorm, and at the tender age of 21, I packed my bags, and moved in with him. We pursued a very active lifestyle together. All our spare time was spent running, cycling, canoeing, climbing, hiking and swimming… and a good few parties, as well. By 24, I gave birth in our bath to our daughter Lilu and my career and life was once again changed forever. I focused my attention on my first solo album, which later won a South African Music Award. I was also writing and producing music for television, enjoying the flexibility of working as a recording artist, while juggling being a mom and wife, and of course running…

RUNNING SURPRISE
In 2005 I received a message from my club, RAC, informing me that I had been selected for the Gauteng team to race in the national marathon championships. It was a big surprise. I had generally managed a top 10 place in my races, but had always considered myself a bit limited in the running arena. However, it turned out that this was the boost I needed. I started training more efficiently and I went on to win several road races and represented Gauteng in both the marathon and half marathon national champs, and picked up sponsorships in running and triathlon. But truth be known, running became my obsession.

I devoured books on the subject, and spent hours on the road and in the gym. My computer’s main function was to log my training, and as my body fat percentage shrank, so did my marriage and my career. Then, after winning the Spring Striders 32km race, I bounced back into hard training without a second for rest and recovery. I was breaking all the basic rules, and I knew it. Within days I detected a peculiar and persistent pain in my lower leg. A friend urged me to go for X-rays, and it turned out her fears were well founded: I had a stress fracture and I was put off all exercise for six weeks.

It was a hard slap in the face. My body and my relationship were in tatters, and I had forgotten why I was doing this all in the first place: because I love it. But six weeks and two kilograms later, I discovered I was pregnant with my second child. Running had miscarried several previous pregnancies, and it was with much joy and relief that I turned my back on competitive running and spent the next nine months repairing my damaged marriage and nurturing the beautiful growing creature inside me, our son Mojo. I was happy and counted myself lucky that I had achieved many of my goals in running, and had the wonderful and unlikely experiences that I had.

QUALITY OF LIFE
We decided to escape the big smoke and move to the Natal Midlands, and though it put other pressures on us with Bob commuting to Johannesburg, it was the change of pace that I needed. My cross-training was now riding my horses, strength training was working in the garden, and flexibility came from my rather overzealous arts and culture teaching at the local school. My running was limited to three times a week, with no watch or mileage check, and often over dirt paths and mountains. I was fit, but also much stronger, with sexier curves! Our marriage was finally blossoming after eight years, and the next four years were intensely happy. I didn’t think about races or personal best times, or track training or hill repeats. So on that fateful day in April, I knew that I had no regrets.

We were on holiday in Cape Town. It was the first real family holiday we had ever taken, and we spent rare time with family and friends. On the 8th of April, Bob, Mojo and I went down to St James beach. We spent a blissful day playing in the waves, lying in the sun reading the newspaper, and having a lazy lunch at the local bistro. I clearly remember ordering Canaloni Amore, and the waitress warned me that I would feel very passionate after eating it. Bob and I giggled about that. Our love was palpable that day.

We got back to the house and he quickly changed into light climbing gear. He had a skip in his step because he was going to spend a few happy hours with his good friends, doing the thing he loved. Mojo and I played outside and as the darkness started creeping in, I thought to myself how glad I was that Bob must be having such a great time. For once, I didn’t think about the phone call. The rock fell off Table Mountain and killed him instantly, but didn’t stop there; it crashed into my life and tore up the solid ground that I was standing on.

THE ROAD BACK AGAIN
So after that fateful day, I spent the next few months building up my running mileage and my career with equal ferocity, and grappling with a completely altered self-identity. I started setting up my recording studio at home, and getting in touch with old music buddies. It was time to pour all of this raw emotion into making music. I wanted to write songs and get on stage and drink from this well of emotions. But what I had not factored into my programme was that grief is an almighty beast. My body started aching from top to toe, and every movement became an effort. I struggled to maintain a sense of purpose, and I was drowned by feelings of anxiety, self-loathing and doubt.

My sense of identity was in crisis. Did I still have what it takes? Was my music still relevant? Did anyone ever want to see me on stage again? Equally, would I ever run under four minutes a kilometre again? And the great big clanging bell that rang loudest; would I ever have a partner again that understood the nuances of my quirky life, and would love my imperfections and inadequacies. All that history was obliterated. Once again, my body was the symptom of my internal problems. I suffered a deep muscle tear in my right calf, and was put off running for a few weeks. I used the opportunity to regroup and focus on strength training.

As soon as I was good to go again, and with renewed energy, I set my sights on my next goal. I needed to test my running in a race. So I entered my first running race in five years. My hopes were to finish in a good position and to test my speed. I chose a 20km trail race. As we lined up at the start, I was dismayed to see the perfect example of a female competitive runner line up next to me. We spent the next 20km tussling for the lead position. My only advantage was my past running experience and my newly discovered capacity to endure pain. The route was spectacular, though extremely tough, but I enjoyed the challenges of the uneven terrain, and the fast single-track downhill was thrilling. My nemesis eventually took first place, but truthfully, I was delighted with my second position. It was a good re-entry into the fray, and I had enjoyed every hard breathe. I could now start making plans for my other running goals.

So how does a heart rate monitor measure a broken heart? They say time heals, but I know I will never be the same. How many years will it take for me to stop reaching out to Bob’s side of the bed in the middle of the night, or imagine his crazy, wild spirit walking through the door? But I will tell you one thing with absolute certainty; it is better to have loved and lost than to have never loved at all, and I will spend the rest of my life waiting to meet him again.