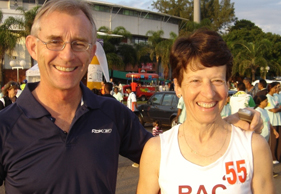 Most runners, especially female runners, know the name Sonja Laxton. She is not only synonymous with longevity in the sport of running, but also known for her humbleness and friendly attitude towards everyone at races countrywide. She is a well-known face at all Spar Ladies’ races, where she often finishes way in front of many women half her age! When speaking to Sonja one quickly realises that this woman has a pure love for running and is not motivated by podium finishes or glory, nor is she obsessed by mileage or the newest training methods. She runs because she absolutely adores it!

THE EARLY DAYS
Sonja started running in grade nine in PE and just happened to be a bit faster than the other girls. In those days, females were not allowed to run further than 150 yards. “Men back then thought women would probably die if they had to run 800m! In grade 12 they brought in cross-country, but only boys were allowed to run it.”

After school she studied at the University of the Witwatersrand, where she was a small fish in a big running pond. “On a good day I was second-last, but I kept going because I enjoyed it,” chuckles Sonja, who is as brainy as she is fast: She has a Masters degree in Biochemistry. She started venturing into ‘longer’ distances and one of her first wins was in the 800m at the Southern Transvaal Championships, which she won in a time of 2:22.2. At an Intervarsity meeting shortly after that, she won her first 1500m in 5:10.18.

At this time Sonja met Bea Marais, a former 800m SA record holder who introduced her to coach Jan Barnard. He started coaching Sonja in 1969. In 1971 she won her first SA senior track title and broke the SA record for 1500m. “I actually beat my friend Bea and finished in a time of 4:29.8. That race really stands out in my mind. I got to the 200m mark and was running behind Bea. I was feeling good but initially thought I can’t pass a Springbok runner!” In the same year Sonja won her first SA senior cross-country title.

MAKING INTERNATIONAL WAVES
Sonja’s running improved almost daily, and in 1971 she was awarded Springbok colours for the first time. Her first international meet followed when she competed at the British Champs. “I finished 16th and had so much fun. It was my first time overseas and so different to running here. We ran in the mud and cold. I still have contact with the family I stayed with back then, and they even have a Laxton photo album!”

The second time Sonja ventured overseas was when she competed in Canada, and though she ran mostly smaller races, she still made a clean sweep of most of them. Back home she focused on track and cross-country and competed annually at the SA Champs. Then in 1974, under the guidance of her new coach, Stuart Banner, Sonja travelled to Belgium to compete on the cross-country circuit. “I ran three races there and I won them all. One of the girls I raced against was third at the World Champs and I beat her. It was so much fun!”

Similarly, in 1975 she ran in Israel where she was crowned champion in the 400m, 800m and 1500m. “I remember returning to the hotel and getting a free cold drink because I beat some girl who went to the Olympics!” A year later in 1976, she finished fourth at the British Cross-country Champs. In the same year, Sonja was selected for a South African team to tour overseas, but two weeks before they were due to depart, South Africa was banned from international competition.

Over the years she has run so many races that finishing times and positions are sometimes hard to remember, says Sonja, who has four sets of books filled with races and times. Every race since 1962 is recorded in her neat handwriting and your head starts spinning just looking at this amazing record of awesome achievements. “I stopped counting how many races I have done. At one point it was over a 1000, and that was years ago.”

MARRIED LIFE
Sonja got married to Ian Laxton in 1974. His is a well-known face in running circles and he does a lot of work with the Comrades Marathon Association and the Spar Ladies’ Series. The couple started their married life in Durban, where Sonja lectured at the university in Westville and ran for Durban Athletic Club. Married life treated her well and in 1974 she was invited to PE for a 3000m race where she broke the EP, SA and African records in a time of 9:15.6.

Her first road race came in 1977 when she ran a 20km race in Durban. “Everyone had to predict their times. I won, but was disqualified because I was so far out with my predicted time!” Sonja says she never really specifically trained for longer races. Her training on weekends included running the women’s 4km cross-country event before joining in on the men’s 12km race for extra training.

In 1978 the Laxtons moved to Johannesburg, where Sonja started her long and glorious road running career. “I remember one of my first ladies’ races was the Swartzkops Ladies race. I won and got so much shampoo it lasted me for months!” She joined the Rand Athletic Club at the end of 1986 and is still a member today. Sonja’s daughter Kim, is also an excellent runner. A couple of years ago mom and daughter made the Central Gauteng team to go to the SA Champs and both see this as a very special experience.

RUNNING GLORY
Sonja was the first woman to be awarded triple Springbok colours (track, cross-country and road), and was awarded Springbok colours a total of 13 times. After 1994 Springbok colours were no longer awarded and were replaced with SA national colours, which Sonja was awarded a further three times. As a veteran, Sonja won 23 SA titles (over 10 15, 21.1 and 42.2km), as a master she claimed another nine (10 and 21.1km), and now as a grandmaster she has won two titles (both over 10km).

Her first marathon came in 1980 after her training group, which included Bruce Fordyce, kept nagging her to run a marathon. “I had not been training specifically for a marathon but had done a couple of long runs,” says Sonja, who not only won that first marathon, but also broke the SA and African women’s record by finishing in a time of 2:51. “Strangely enough, my husband’s time for his first marathon and my time for my first marathon is exactly the same to the second!”

Over the years Sonja has run 24 marathons, with an impressive PB of 2:35:44. One of her greatest memories is competing in the 1980 New York City Marathon. “It was one of the most exciting things I have ever done. You get to stand there amongst all your running heroes!” On that day Sonja finished 11th and broke the SA record by crossing the line in 2:43:48. “I ran it again in 1994 and it turned out to be one of my worst races. All the wheels, including the spare wheel, came off! I finished in 3:09 and by the end everyone was passing me. That was my last marathon ever.”

The Spar Ladies’ series has always been close to Sonja’s heart, because she says these races do so much for women’s running. She has run 69 Spar races and only missed two – one in Pretoria about three years ago after she was treated for uterine cancer, and most recently in Johannesburg, when she had to have her appendix removed. “I am okay now and completely healthy,” says Sonja.

GOLDEN MEMORIES
Sonja says some of her greatest running memories come from training sessions. “I remember a training session where one of the blokes dared another athlete to streak across the field. He did and at the end I even handed him a medal. The next day it was in the newspaper. Luckily they did not mention names!”

She also has fond memories of training with Marcello Fiasconaro, who broke the 800m world record in Milan while running for Italy. She says Marcello often used to come to the track having either forgotten his shorts or one shoe! “This was a man training for a world record and he was always joking and fooling around! These days training sessions are a lot more serious. We might not have won money way back then, but we sure had fun, and today we have the best memories.”

Her training regime was and still is very simple. She runs twice a day and never counts mileage. “I only run on time. I have always done a short run of about 40 minutes in the morning and my main quality training in the afternoon. Weekends are reserved for longer runs.” She also goes to gym three times a week and admits that she has been a bit lazy this year, not training as much as she used to.

Sonja says she plans to keep on running as long as she can, because running has become part of who she is. “Every morning I run, shower and make breakfast. If I don’t run everything is out of sorts.”

SONJA’S WORDS OF WISDOM
• Train consistently and diligently, but don’t over-train
• Listen to advice from coaches and sports people from yesteryear.
• Have a long-term goal and don’t try and achieve great heights immediately.
• Try to achieve your ultimate potential.
• Stay modest and humble.
• Remember the Almighty gave you your talent.