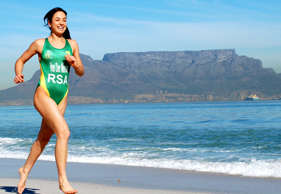 Vicky van der Merwe is a frustrated athlete. The 20-year-old third-year UNISA law student from Durbanville in the Cape, who lives, studies and trains in Stellenbosch, has been sidelined by two stress fractures and then glandular fever for the past year. All she wants to do right now is get back into training and regain the form that saw her winning provincial titles and Energade series races, qualifying for five consecutive World Triathlon Championships as well as claiming three junior World Titles in biathle (run/swim/run).

“The last year and a half was a big disappointment for me. I was in Australia for the World Champs and we trained on the actual race course, I was fit and lean and well prepped, but on the day I was overtrained and had to bail during the bike leg. I just had no power left in my legs. I still finished third in the 2009 Energade series, but overall my season was disappointing. I just wasn’t racing well, and didn’t know why,” says Vicky.

HEALTH ISSUES
“I went to the doctor and was diagnosed as being close to anaemic. Then during the Energade series, I picked up the two stress fractures, first in my shin, then my hip. The doctors told me to take two to three months off, but when I came back and began training for the SA Champs, I only lasted three weeks before my hip flared up. I managed to finish second in the under-23 category at the champs, but I struggled with my hip in the run, which is normally my strongest leg, and I’ve been out injured ever since.”

Then a few months ago, just as the injuries appeared to be clearing up, Vicky was struck down by glandular fever. “I was so sick that I ended up in hospital, and the doctors told me I’m also bordering on chronic fatigue syndrome, and need medication to help my liver function properly! Glandular fever can take up to 12 months to clear out of your system, so they told me to start slowly, with 30-minute walks or 15 minutes of spinning. That was so frustrating, because I was really amped to get going again after the injuries!”

RUNNING TALENT
Vicky was a strong swimmer in primary school, then took up running when she began high school in Stellenbosch. Soon she was talked into giving triathlon a try, and success soon followed. “I won the Western Province Champs when I was 15, then went to the SA Champs and came out of the water second, but finished the bike leg stone last. I ran like crazy and caught them all again to finish second in the under-23 category.”

That Saw her selected for the SA team for the World Champs in Japan, where she finished 60th. “I had a good swim and run there, but again got dropped on the bike. I realised I needed to work on my bike, so in standard eight I went to Germany to train with a cycling coach. At the next World Champs, in Switzerland, I came 14th, and I also started winning some of the Energade events.” That was Vicky’s breakthrough breakthrough year, and she was signed up by the Nestle Purelife team. Later she moved to her current BSG team.

BURNING DESIRE
Vicky’s short-term goal now is to get back on the local scene and do well in the Energade Series, which is important for her sponsors, BSG, Puma and Oakley, who have stuck by her throughout her long lay-off. “After that, I want to race internationally again, and try to qualify for the 2012 London Olympics. Going to the Olympics is my ultimate goal.”

In the meantime, she is trying to stay motivated and upbeat, but says it is sometimes hard. “The other day I put some pics of my last Europe trip up on Facebook, and that just made me sad, because I miss the lifestyle so much. I miss getting up at 5am to train. I miss being smashed at night. I miss the pain, the massages, the travelling. When I get the go-ahead to get back into full training, I’m going to go run with everybody I know – and I have a lot of athlete friends!”