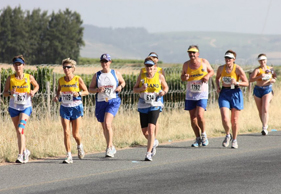 Towards the end of 1988, a group of Strand and Somerset West-based runners decided that they wanted to start their own running club. They were all members of another club that basically covered the whole area outside of Cape Town, and while they still liked their current club, they were finding it more difficult to get hold of licence numbers and to take care of club matters due to the distances they needed to travel and the time it took. A club for Strand-area runners based in the Strand itself made much more sense.

So Jan Grobler, James Moolman, Johann Diener, Dawie Roussouw and Braam Fischer approached Western Province Athletics for permission to establish the Strand Athletic Club, and shortly thereafter, when Jan and James attended a WP provincial committee meeting, they were given the official nod to start the club. “That same night the rest of the prospective Strand club members were all waiting at the Lord Charles Hotel for the news, and when we received a call to say permission had been granted, I bought champagne for everybody,” says fellow founder member Johann Diener.

UP AND RUNNING
So at the beginning of 1989, the now familiar Strand colours were seen on the roads – white and yellow vest with Strand written on it in blue, plus blue shorts. Fast-forward to 2010 and Strand AC has been celebrating its 21st anniversary year with various club functions and promotions, including a formal dinner-dance at the Lord Charles Hotel, appropriately, which doubled as the club’s birthday party and annual prize-giving. From humble beginnings, the club has grown to well over 200 members and you will often see the Strand gazebo at bigger races, or a group of Strand members socialising after a race. They also love running as a pack in the longer races, and the spirit in the group is usually terrific.

As current Strand AC Chairman Lester Burrow puts it, they’ve got a very special camaraderie in the club. “I’ve been at other clubs, but found something special here, the human factor. You don’t find malice or problems amongst our members, and the top runners are always prepared to help slower or less gifted runners. I’ve seen this first-hand through a personal example: I’m asthmatic, and one Saturday we did a 30km pack run where I battled like hell with my breathing. Dave Mason wouldn’t leave me, no matter what. When I had to walk, he stayed with me. That is something common to all our members. It’s a silent rule within the club: Don’t leave anybody behind.”

PACK RUN SPECIALISTS
Getting back to the Lord Charles Hotel, it is still the meeting place every Saturday morning at 6am for the club’s immensely popular pack runs, organised by Pierre and Anita van Zyl. With the spiralling cost of petrol and race entry fees in recent years, these pack runs have seen more and more members choosing a local long run to travelling to a race, and Pierre and Anita really look after them, with a different route every weekend, water and coke stops every three to four kays, and even cake, sweets and homemade sandwiches on offer in the longer runs. The group runs at anything from 5:30 to 6:20min/km and reforms at each water stop, so nobody gets left behind – and according to the Strand website, you will soon come to understand the difference between Pierre’s “platte” (Afrikaans for a flat one) and a “plat platte” (flat, flat one)!

The club’s other official run is the weekly time trial, which takes place on Tuesday evenings at 6pm from the Charles Morkel Stadium in Church Street, where the club shares clubhouse facilities with the Helderberg Rugby Club. “We have two route options, 4km or 8km, and the turn-out is usually anything from 40 to 70 runners,” says Lester. “We meet at 5:50 to celebrate birthdays, update members on coming races, give feedback on great results achieved and pass on other any other relevant club information. Then after the time trial we meet for a beer in the clubhouse, where we also braai every now and then, and we announce our Runner of the Month and Strandloper of the Month on the first Tuesday of the month, and have a lucky draw as well. The Strandloper award is not necessarily for running – it can be given to a club member for doing anything above or beyond the normal duties of a club member.”

When asked if the south-easter ever disrupts the time trial, he simply smiles and says, “the route is circular, so when the south-easter blows in summer, the first half is with the wind and the second half against it, but in winter it’s just the other way round when the north-wester blows. Look, Strand is a windy place, but our members still come out to run.”

GREAT RUNNERS, GREAT CHARACTERS
The club currently has a number of top runners amongst its member, notably Celia Pienaar, who recently represented South Africa in her age group at the World Triathlon Champs in Hungary. Then there are Johann Diener, Friedel van der Merwe and Esther Brink, all of whom have represented Western Province many times. Also, the women’s veteran (40-49) team was third team home in the 2010 Comrades Marathon.

On the training front, Lester says the club is lucky to have Max Ruppert amongst its members, as he heads up Max’s Training Group. “He went to Saudi Arabia for a few years, and when he returned he started a training group for the club, catering for all runners from fast to slow. They do speedwork and more specific training, and the runners following his programme have really posted some great times and big PBs.”

But it’s the ‘characters’ that Strand is known for, with Pierre and Marina, and Gordon Leonard, considered some of the biggest stalwarts of the club and well known in the province for their humour and good nature out on the roads. “Pierre and Marina are the club,” says Lester. “Every single Saturday morning, without fail, they do our pack runs. There’s Coke, sweets, sarmies, milk, water. They’ll even give you a ‘dop’ if they can! They never miss a Saturday, and Yvonne and Martin Naude are also usually there to help. As for Gordon, well, he’s 75 years old, but you won’t be able to keep up with him. That one is a real party animal!”

REHYDRATION TIME
Typically, Pierre humbly reckons Gordon is the biggest character in the club. “About 15 years ago when Gordon joined our club, he asked us for a lift to the Hohenhort 15km in Constantia. After the race, when we were sitting on the grass waiting for the prize-giving, Gordon saw a guy walking around selling beers, so he bought a round for all six of us, to say thank you for the lift. Well, we all said thank you very much and drank our beers, then when we finished, we told him we were ready to leave and went to the boot of the car as if to put our bags away, but instead out came the club cooler box, full of ice-cold beers. Gordon just stood there looking amazed, then he started calling other runners over to look at our cooler box, proudly telling everybody to look at his new club!”

Like any running club with a strong social scene, Pierre can tell some wonderful stories about road trips to far-flung races in years gone by, where the Strand AC club name was held high. “We used to take a kombi full of guys to Bonnievale each year, and on the way back we always stopped in Stormsvlei to visit the bar. There were two old ‘tannies’ behind the bar the first time we went there, and they eventually asked us to leave because we had drunk everything! Three weeks later we drove that way again for another race, so we stopped at the same bar, and the tannie just swore when she saw us coming in!”

AT THE RACES
Strand currently has two races on the calendar, the Fun in the Forest Half Marathon and 10km on Vredenburg Farm in April, and the Eikendal 10km on Eikendal Wine Estate in October, both of which offer tough but incredibly scenic routes, much of it off-road. However, Lester explains that things may change soon.

“The Eikendal race will be run as a fundraiser for the Helderberg Hospice next year, and we’ll still be helping with the organisation and the race will be run under the auspices of our club, but the Hospice will be the main organiser. We’ve been approached by Western Province to put on a fast and flat half marathon in the Strand area, which potentially could become the WP Champs or a league race. So watch the calendar for developments!”