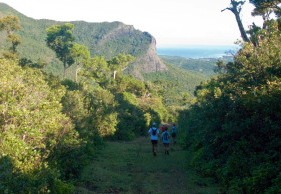 Having had my trusty trail shoes nicked by the OR Tambo affirmative shoppers last year, naturally I decided to wear them this year and make sure I arrived to the race with a full complement of running kit! We were part of a special tour deal arranged through Wildrunner, and the best thing of this is that both the 80km and 35km ‘Raids’ finish right outside your five star Tamassa Resort – so being weightless is only a short stagger to one of the gigantic swimming pools or the warm Indian ocean that fronts the resort. Paradise!

The only downside of staying at the finish is the sparrows fart one-and-a-half-hour transfer to the start preceded by a 3:15am breakfast! There is so much excitement on the bus, though, and the rapid cackling of French-speaking runners give you the feeling that you are somewhere exotic and far from home.

The 80km is a linear route starting from Casela Bird Park, about halfway up the island on the West side, and finishing in the middle of the southern coastline, near the sleepy town of Bel Ombre. The 35km is pretty much the final 35km of the 80km route – which means some runners in the shorter course are overtaken in the final stages of the race by the speedsters in the long course.

MORE THAN YOU BARGAINED FOR
Now for anyone who thinks a run on Mauritius would be tropical island forest for the full length of the route would be horribly wrong. In fact, the first 35km through Casela-Yemen Nature Reserve is like running in open African savannah, with flat topped acacias dotting the otherwise open landscape. The well-marked route winds its way along the base of some pretty enormous mountains – over 1000m high in places, some with sharp granite spires at the top.

One of the most notable and challenging aspects of running on a tropical island for us South Africans – well, for those who don’t come from Durban, at least – is the intense humidity. Within the first 100m you start to sweat, and after a few kilometres you are showering perspiration. Of course, this wreaks havoc with your body’s balance of electrolytes and heat control, so taking it easy for the first few hours is critical to staying upright and moving forwards. To help, the organisers put buckets of salt and sugar at each water point and if you think that sounds strange, wait till you taste it mixed with water! Yuk. But fortunately it works.

WHAT A SIGHT!
The first 35km are fairly easy relative to the second ‘half’, with only a few small ups and downs (again relative). From the 35km mark you start to enter more typical Mauritian terrain as you make your way up towards the ominously steep slopes of Black River Gorge National Park. This is the largest section of Mauritius tropical forest left, and encapsulates steep forested slopes, sliced down the middle by the Black River. Here you will catch sight of a Mauritius Flying Fox – a seagull-sized fruit bat – which at first might have you scurrying for cover, but is quite harmless.

Entry into the forest is so well-timed, and as you trade sun for the cool shade of the canopy, the relief is overwhelming – at least until you hit the steep sides of the gorge. From 38km to 41km, you climb straight up the forested slope to the plateau – 600m of vertical height gain. Despite being shady, there is no air moving in the forest and the effect is quite debilitating. This follows on another lesson learned in dehydration and heat exhaustion: Rehydrate! No, not the physical act of rehydrating, but those insignificant little packets you buy from the chemist by the same name. After years of carrying them around the mountains and never having had to use them, I have finally discovered firsthand how unbelievably well – and instantly – they work!

STOCKING UP
After summiting the first really big climb of the day, you break out of the canopy on the Jet Ranch plateau to the most incredible views over the western coastline of Mauritius, and the inviting colours of tropical Indian waters below. The forest track at this point turns into a path and for the next 5km you wind your way through typical tropical forest habitat. At the 51.5km mark is Jet Ranch, the start of the 35km route and the one place en-route where you can pick up your stash and get a proper meal (pasta). To be honest, the event is so well supported by water and food tables there really is no need to stash anything.

A few kilometres after you leave Jet Ranch you reach the edge of the Black River Gorge once again. Before you lies a view down through paradise, from tropical green forested mountains slopes to a turquoise blue lagoon edged by a protective dark coral reef line and topped with a brilliant blue sky. Pretty soon the track narrows and descends sharply, winding 5km into the depths of the gorge, and flashing spectacular Mauritian vistas at every corner. The track becomes a trail and the descent is fast, technical and long. At the bottom, the Black River brings a wet but welcome wade.

Then comes the second big climb of the route, a 4.5km grind out of the gorge up ‘Parakeet Wall’ – a slope that that feels like 40 degrees. It’s a spectacular threaded ridgeline that rises steeply, both sides falling away to the river below. Those runners that pushed too hard in the early kilometres pay the price here.

HEADING HOME
From the summit it’s a 13km downhill jaunt to the finish. The views this time extend down to the beautiful south coast of Mauritius. With the descent comes a steady increase in temperature and humidity as you drop towards the warm Indian Ocean. Up until the final 5km you are still weaving in and out of the relative cool shadows of the indigenous tropical forest, but all of a sudden the forest gives way and the sugar cane quickly reawakens the reality of running in tropical climates without cover.

The finish comes, and it’s all over. Well, the run is, at least. The next few days are spent enjoying the island lifestyle at Tamassa and taking a swim with the spinner dolphins at Tamarin Bay. This is such a magnificent combination of a tropical island holiday and a run. And if the 80km is a bit on the long side, try the 35km first, which provides enough challenge and island experience!

As I sit here and write this, I can feel the excitement again for returning to the land of seagull-sized fruit bats, and another 80km through this island paradise coupled with a few days in luxury. Pencil this one in your diary for 2011, because it’s well worth it, and if you stay at Tamassa for a few nights all the better – it will most certainly keep the non-runners in your family happy.

Wildrunner will be offering special rates for South African trail runners for the 2011 Royal Raid. If you are interested, drop an email to info@wildrunner.co.za.