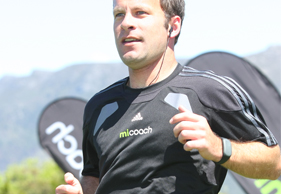 A number of years ago, my first experience of heart-rate (HR) based training didn’t really get my pulse going… The monitor was set up way too low for my max HR, so the trial ‘run’ I took part in ended up with me walking most of the way to get my HR down enough to progress to the next interval of the set workout. Now I realised that the set-up was wrong, and I know that HR-based training is the most effective way to improve one’s performance, but after staring at that little screen for nearly the whole session, I did decide that training with one wasn’t really my thing. I simply prefer running as I feel and don’t want to constantly check my wrist to see whether I am in my target HR zone, and whether I should speed up or slow down – which is why the adidas miCoach does get my pulse going. It gives you audio prompts via an earphone regarding target zones and workouts, and has no visual display, so no looking at your wrist at all.

I was recently invited by adidas to a miCoach presentation by former Aussie Olympic Swimmer Ryan Mitchell, who heads up their global Interactive Business Unit. He told us journo’s how miCoach works, then took us outside for a interval session test run, followed by showing us how to pre-programme the unit using the miCoach website, then download, interpret and adjust the session information.

Basically, you pre-programme your max HR and select the training session you’d like to do from a large menu, then you hit the road and the unit gives you audio prompts when to speed up or slow down, depending on which HR zone you should be in: blue (65% of max), green (75%), yellow (85%) or red (95%). Ryan and co had pre-set the units for us to do a 22-minute workout, starting with a blue zone warm-up, followed by a green zone speed-up, then six one-minute yellow zone intervals with one-minute green zone rests, and ending with a blue zone warm-down.

FIELD TESTING
Having strapped on the HR chest strap, attached the stride sensor to my shoelaces, plugged in the earphone and switched on the miCoach, I started running and listening to the woman’s voice in my ear. When my first yellow interval came round, I put my foot down, but I was not working hard enough to get to yellow, hence getting a second prompt to “Speed up to yellow zone.” I had only been running in the upper green zone, but Ryan had warned us that this might happen, as we still had to get the feel of things. So, when the second interval came round, I rocketed around the field to make sure I got to yellow. But then in my third and fourth intervals I was prompted to “Slow down to yellow zone” – but I wasn’t running as hard as the previous two intervals, so in my semi-gasping state I decided there must be something wrong, and went even faster! Then the same message to slow down came in the fifth interval, and by now I was taking serious strain, so I decided to listen to the voice in my ear instead of the voice in my head…

When we went back indoors after the run, Ryan asked if he could download my session info to show the group how to use the online support. When my graph popped up overlaid on the workout, I could see that in the third and fourth intervals I wasn’t just in the red zone, I was way off the graph! I couldn’t resist quipping that “I think I just killed myself!”

OK, The unit was not set up 100% to my max HR, so my actual red zone was higher than the graph allowed, but still, I had been running much harder than I needed to in order to get to my yellow zone. It really brought home to me that as you tire, your HR climbs easier, so training on HR will prevent you from overdoing it and running yourself into the ground, which is what you’re likely to do when running based entirely on time and pace. Ryan then showed us how easy it is to adjust the settings online to bring the miCoach in line with my actual max HR – so the next time I use my unit, it will give me a more effective workout.

FEEDBACK
The prompts you receive are not at all irritating or overwhelming, and the unit has a handy quick-reference function: push the big centre button and you receive a summary of time, distance, pace, stride rate, average HR, and which zone you’re currently in. Checking all that info on a wrist unit would require looking down for a good few seconds, perhaps even scrolling through menus, whereas with miCoach you just comfortably continue running. You can use any earphones, as the unit takes a universal jack, and added to that, you can plug miCoach into your MP3 player, which allows you to listen to music that cuts out automatically when you receive miCoach prompts. You can also plug it into your smart phone to use the phone’s GPS function as part of your workout.