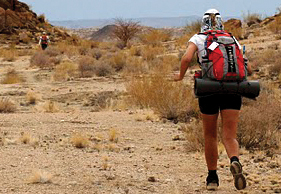 No website or brochure could have prepared me for the journey I was about to set off on. The only things I knew for sure when I entered this race was that it is a self-sufficient run held over six legs in seven days with set distances for each day, ranging between 28km and 76km. And so began perhaps the best (and worst?) week of my life. We set off on an unknown journey at 9am on Sunday 17 October. If everything went according to plan, with months of preparation, product testing and training paying off, then we would cross the finish line a week later on Saturday 23 October. But don’t we all know what presumptions mean?

LIFE IN A BACKPACK
My backpack weighed in at 10kg (with water), which was not too bad considering some guys were lugging around 16kg – without water! Now I should add that they had 400g steaks packed for dinner on the first day! Most of the weight in my pack consisted of food, so the good news was that each time I ate a meal, I was slowly getting rid of the weight that was proving to be quite tiring on my back and shoulders. My gourmet menu for each and every single day consisted of strict rations of Future Life porridge, raisins, energy jellies, Salticrax, biltong, a protein bar, a small roll of Super C’s and some two-minute-noodles or smash and tuna.

Hydration and recovery was extremely important, especially in the hot conditions we were running in. I was adequately prepared with my Hammer products mixed in water, a Rehidrat sachet here and there and also a couple of Eno’s. Some of the other bits and pieces bobbing around in my pack included a sleeping bag, a head-net to guard against the dreaded ‘miggies’ while running, a camping pot to prepare my food, blister treatment kit, wet wipes and Vaseline. The wet wipes were crucial because they substituted for a bath each day, while the good old trusty Vaseline was supposed to prevent chafing. However, it turns out Vaseline melts when it gets too hot. It was as runny as syrup and hot enough to fry chips in the daytime temperatures, so I had to choose between chafing or running the risk of third degree burns… decisions, decisions!

CAMP LIFE
Camp life consisted of a village of low gazebos and groundsheets where we picked a ‘comfortable’ spot each day and made ourselves at home with our sleeping bags. Our sweaty running clothes were hanging all over the place and I think hanging our stuff out to dry each day gave us some (false?) sense of starting the day with fresh clothes. But at least we were all in the same smelly boat together! We were rewarded for our efforts with two of our overnight camps being alongside the Orange River – at which point much-needed bathing took place.

The social aspect of this race is phenomenal, and the friends made, jokes shared and camaraderie is awesome. Some days your quips will lift another runner’s spirits, and at other times they’ll return the favour without even meaning to. The support and encouragement is awesome! As for the support crew – from medics, to checkpoints, to physiotherapist – we could not have asked for a more capable team to look after us and see us through to the end of an almost indescribable race.

GOING THE DISTANCE
Our daily distances were laid out as follows: 26km, 38km, 30km, 76km, rest day, 46km and 24km. Of course, Murphy’s Law meant the longest day was also the hottest, as temperatures reached 48 degrees on day four. The running terrain was an equal mix of jeep track, hard gravel road, rocky sections, and of course, soft sand – which usually stopped you dead in your tracks!. All of this contributed to glorious blisters and sore feet. There were, of course, those runners immune to blisters and pain but they received a lot of muted growling from us ‘mere mortals’.

Unfortunately, there were those not immune to the hardships that the Kalahari was relentlessly throwing at us, and seven runners pulled out at various stages due to reasons ranging from heatstroke and ITB, to infected blisters for which intravenous antibiotics were doing nothing! I managed to hang in there day after day, and with toes blistered like never before, heat-rash that had the medics at their wits end, and a smile that only now and again disappeared, I finished the KAEM 2010 as third lady finisher!

How exactly do I describe the most difficult, personally challenging and exhilarating event in my life? KAEM 2010. To my gazebo-sharing mates, Heather, Nic, Richard and Dave – thanks for the hysterical laughter when needed most and the fun times. (Okay, so maybe tuna is seafood!) Everyone who ran and crewed on this race in 2010 will forever be part of a memory that will never be forgotten – and for that I thank you all.