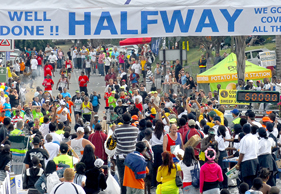 The Comrades Marathon Association’s (CMA) 2011 AmaBeadiBeadi Charity Campaign was launched in Johannesburg in November and its main intention is to foster wider support for charitable fundraising for the CMA’s five official charities.

An exciting facet to this year’s campaign is that runners have the opportunity to improve their seeding batch, while raising funds for a good cause. This innovative initiative is the brainchild of popular radio personality Brad Brown, who thought up the idea whilst fundraising during his first Comrades Marathon run this year. The story behind Brad’s novel and noble gesture is an emotional one, which strongly epitomises what this exciting endeavour is all about.

HERE’S HOW IT WORKS:
• The CMA has reserved 1000 entries for runners who sign up for the Race 4 Charity initiative and raise R5000 by getting 100 friends, family and colleagues to sponsor them R50 each to run the Comrades Marathon. This will ensure that they get to start in their own special seeding batch (CC – Comrades Charity batch) near the front of the field on race day. So if you’re a ‘back of the pack’ runner, this is your chance to get into that special seeding batch.
• Go to the Comrades website www.comrades.com and follow the Race 4 Charity link. Here, runners are able to sign up, whilst family, friends and supporters can make donations and leave messages of motivation. Runners get to choose which of the five AmaBeadiBeadi charities they would like to support. The campaign takes on an added air of excitement as prizes are up for grabs for those who raise the most funds.
• All Race 4 Charity runners will also receive an exclusive goodie bag which they can collect at the charity stand during registration.
• The entry process remains a simple one. Runners need to enter Comrades 2011 by 30 November, but will have until 6 May 2011 to sign up for Race 4 Charity and raise funds. Please note that normal race rules still apply for entries and there are no refunds should a runner fail to qualify or raise the minimum amount.

The AmaBeadiBeadi Charity initiative gives individuals the opportunity to not just make a difference, but to unite people of all backgrounds to get involved and race for charity, in order to effect a greater positive change in the country. “The AmaBeadiBeadi campaign is just as much a charity drive as it is a thank you to the Rainbow Nation for supporting the Comrades Marathon. We encourage our runners to embrace this noble initiative and to do their part for the greater good of South Africa,” says CMA Chariman Peter Proctor.

All AmaBeadiBeadi charities – the Community Chest, Wildlands Trust, Sports Trust, Pink Drive and Starfish – will benefit from this exciting campaign. So, if you’ve ever yearned to do something for the environment or to make a difference in the lives of the less fortunate, then Race 4 Charity is for you, as its sole purpose is to facilitate the process of raising money for a good cause. As Brad puts it, “A rising tide lifts all ships.”’

Visit www.comrades.com and click on the Race 4 Charity link to be a part of this amazing initiative.