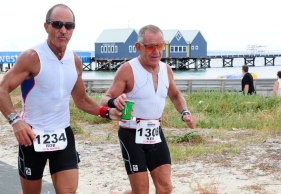 Ken Poole only took up running in his late 30’s after a family member convinced him to enter a local road race, and like most South African runners, he had to go on to conquer the iconic Comrades Marathon. To say that this man has a massive natural talent for our sports is an understatement. He ran his first Comrades at 39 and returned the following year to run his first silver medal in an incredible time of 7:13. Ken has gone on to run a total of 21 Comrades, with nine silver medals; his last silver was at the rip old age of 58 – the oldest person to earn a silver medal on the day. He has run 12 Two Oceans, earning five silvers, and has won so many local road races in his age category, that when asked if he could type it all out, he could not fit it all on an A4 page!

Ken’s impressive list of achievements doesn’t stop there. As if ultra-distance running is not enough, Ken is also an Ironman champion. An Ironman race is regarded as one of the world’s most gruelling single-day endurance events, with athletes putting their bodies through anything from eight to 17 hours of non-stop exertion. The average age of most Ironman competitors is between 35 and 44, and most Average Joe’s (if you dare call an Ironman athlete average) run onto the red carpet in anything between 12 and 14 hours. Now knowing this, you will realise what an extraordinary man Kenneth Poole is; at the age of 69 he recently won his age group (65-69) at the SunSmart Ironman Western Australia in a magnificent time of 11:42, smashing the previous record (12:06) by almost 30 minutes. What makes his achievement even more remarkable is that Ken is one of the oldest competitors in his age category.

His victory was made even sweeter by the fact that his training partner of 12 years, Rob Coulson, placed third in his age category (55-59) at the same event. Rob is an accomplished athlete in his own right. He won his age category at Ironman 70.3 last year and also won Ironman SA in 2008. Prior to running, Rob had been involved in all forms of baseball, from junior to senior level. He will be doing his 10th Comrades and 10th Ironman this year.

Ken’s list of achievements in triathlon is very impressive. Besides winning the Gauteng and SA Triathlon Champs in his age category countless times, he has finished on the podium at eight Ironman races. The list continues: Ken also completed the Duzi Canoe Marathon and the former SA Leppan Ironman. Back then Ironman consisted of paddling, cycling and running, and Ken finished a highly creditable 13th.

Not many people look forward to birthdays as they get older, but Ken can’t wait to turn 70. You may wonder why. Well, from next year he will be the “youngster” competing in the 70-74 age category and he has set his sights on a podium position not only at Ironman SA in 2011, but also at the prestigious World Ironman Champs in Kona, Hawaii.

MAKING THE SWITCH
Ken initially didn’t settle with one club, but then the legendary Barry Holland from Jeppe Athletics invited him to join a ‘good club’, and he did not hesitate. That was 15 years ago, and today Ken is still a proud Jeppe member.

So why did two such accomplished road runners like Ken and Rob make the switch from pure road running to triathlons? “We wanted to do something besides just run! Also, though triathlons require a lot more training than running, they are easier on your body. But the nicest thing about triathlons is you can be very competitive within your age group, you have races within a race” says Ken.

“Winning a triathlon is a very rewarding experience, especially because you have put a lot of time and training into it. That’s probably one of the reasons why we enjoy triathlons more, because we achieve better than in running. And when you finish an Ironman race and the commentator calls out your name, saying that you are now an Ironman, it is a very special feeling,” says Rob.

They both love adventure and in 1999 the two men summitted Kilimanjaro with a group of Jeppe athletes. Ken is also a veteran of over a thousand freefall skydive jumps.

TRAINING
Triathlons require dedication, motivation and most importantly, many hours of training. Both men start their day at 4:30am, training twice and sometimes even three times a day. Their training sessions are built into three-week blocks where they train every day before taking a two-day break. After each week, they build intensity and mileage slowly. Both believe they have enough experience by now to train the way they know works for them. They log every training session and at the end of every day, week and month they can tell you exactly how many kilojoules they have burnt and how many kilometres they have swum, biked and run.

After Ironman SA in April, they focus their training solely on Comrades, which is usually only six to seven weeks later. “The fitness you gain from training for an Ironman race definitely pulls you through the gruelling Comrades Marathon,” says Rob. “For example, last year Comrades was run five weeks after Ironman. Ken and I took a week’s rest after Ironman, then we ran in the rain, got flu and had to take another week off. We ran for two weeks and took one more week off before Comrades, but we still did well: I finished in 8:33 and Ken finished in 10:49.”

THE AUSTRALIAN IRONMAN EXPERIENCE
Ken and Rob trained hard for their Australian trip in December and were well prepared for the gruelling race. However, in triathlon racing it is difficult to see who your closest competitors are, as entrants don’t wear age tags as in running races. Ken therefore usually makes a mental note of the race numbers of his competitors, so when he started running he saw one of his competitors in front of him. “I had a terrible first lap but as I went along things got better. On the second lap I managed to pass him and open up a considerable gap. Though I was ahead of him I was not sure who else was in front of me. It was only when I crossed the finish line that I realised I had won and broken the record. I was very happy!”

Rob and Ken will both be competing at Ironman SA in April, but have their sights set on rather running a good Comrades Marathon in May. “In 2012 we will concentrate more on Ironman SA, as we would love to win our age categories and go to the World Champs in Hawaii,” says Ken. They have both competed in Hawaii before, and say this time they are planning everything way in advance. Like arriving in Hawaii at least three weeks before the race to acclimatise. “The atmosphere in Hawaii is fantastic. The top 5% athletes in the world are there. You see these guys training from 5am till 10pm and you think they are crazy, but that is what they do, and why they are such good athletes.”

WHAT DOES IT TAKE TO BE AN IRONMAN?
Ken and Rob believe it is all about consistency, mental strength and a fine balance when racing and training to be an Ironman. “Many people have a fear of the water and that’s why they don’t even consider doing triathlons in the first place. When you swim it feels as if you don’t have control over anything, while with cycling and running you have more control: you can stop and put your feet on the ground at any minute. The best advice we can give when swimming is to stay calm and not use too much energy,” says Rob.

There is also a fine balance you need to maintain when racing to make sure you get the swim, bike and run right and don’t go too hard or to slow in any of the three disciplines, says Ken. Remember to be consistent in your training; don’t just concentrate on one discipline that you consider to be your weakest discipline. “Train sensibly, don’t race in training!” Nutrition also plays a huge role in training and racing, especially on the bike.

The most important factor is mental strength. “Ironman is not a fun event; it is a hard day out. On the day every entrant takes a lot of strain, no matter if you are an elite or an average athlete. Just keep going and don’t give up. You have to push through to get the medal. You have done all the training, now you just need to get through the day, cross the finish line, get your medal and smile. That is what it is all about,” says Rob.

TAKING IT A STEP FURTHER
Maybe you’ve just finished Ironman 70.3 and now you’re considering taking on the big mamma, but wondering if you are ready. “It all depends on your fitness level and how you’ve trained up to now. You have to be sure you can go the distance and keep up with the training, which involves huge distances and many hours. If you finished comfortably, then go for it, but if you scraped in at the end, rather wait another year,” says Ken.