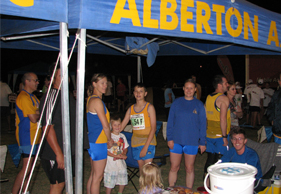 The first eight-hour relay for primary schools was organised 10 years ago by the Ho?rskool Jan Viljoen Athletics Club and over the years it has grown to such an extent that they had to organise a bigger event each year until it reached its current format of 18 hours! The nine-hour event still takes place and runs until midnight, while the 18-hour event goes until noon the following day. During this time you run as many laps as you can around a 1km grass track, taking turns with your nine team mates. The current race record was set in 2004 and stands at 296km in 18 hours.

THE TEAM
AAAC has participated in the 18-hour relay for the past three years and as a proud (and quite competitive) club, we take the event relatively seriously. In 2008 our men’s team won the relay, completing 280km in 18 hours. Our mixed team came second, completing 242km. In 2009 AAAC only entered a mixed social team, and they also won the event, completing 244km in 18 hours.

FRIDAY NIGHT LIGHTS
As the sun set at 6pm the 18-hour race was about to start while the competition was fierce between the high schools in the nine-hour relay, which at that point had already been running for three hours. On the brightly lit school field the air was filled with smoke from braais, loud music and hundreds of kids shouting and cheering. The great atmosphere got the adrenaline pumping and for the first few hours everyone was in high spirits and our runners did three or four laps at a time.

The high school relay reached its climax at midnight with Ho?rskool Marais Viljoen from Alberton winning the race with 140km under their belts. Westonaria finished second with 134km. We still had 12 hours of running left and the graveyard shift was about to start. As the track became quiet, each runner had to dig deep, especially when running down the dark, quiet back stretch of the track. After every two or three laps at maximum pace you’d try and stretch your sore legs a little before getting an hour’s sleep.

THEN THERE WAS LIGHT
The graveyard shift went quicker than expected and by 6am we were doing one or two laps at a time. With only two hours left we set new goals for each team member. Each runner knew they only had two or three more turns left to run – even that thought hurt – but not wanting to let the team down, we kept pushing. Strangely, most of us ended up running 1km PBs at this stage!

With 10 minutes to go we were on 249 laps and the mixed team was on 199; we paused for a moment and got all the runners and supporters of the two AAAC teams together to plod the last lap together, finishing off one of the most amazing nights of our lives. The men’s team won the relay with 250km and the mixed team managed 200km with only nine runners, taking second place in the mixed category.

AAAC would like to thank Ria Bornman, her excellent team at Jannas and their sponsors EPR for organising such a superb event each year! See you again next year…

IN THEIR OWN WORDS
“I have never experienced this before. It’s definitely not for the faint-hearted and you need to be highly competitive to participate. Excellent for team-building. I will be back next year for sure!” – Eugene Le Maitre

“It’s tough but fun, and I will be back next year!” – Noeline Blignaut

“The race was exhausting, but an eye-opener to how far you can push yourself. The camaraderie amongst the team members was unbelievably supportive. Even with the pain and sleep-deprivation, I really enjoyed it.” – Adelia Eloff Cooke

“It is a great adventure and really puts emphasis on how one handles tiredness and performance during the entire event. It was great being part of a winning team and I feel privileged to have been part of this event.” – Alan Bezuidenhout

“You compete against other teams, but mostly against yourself for your team. You fight internally to go faster and keep going during the early hours of the morning, when your body doesn’t want to anymore, and the last hour is like nearing the stadium at Comrades. Nothing beats the Jannas 18-hour relay for team-building” – Niel Cilli?

“The words ‘Let’s do it again’ have a whole new meaning.” – Gert Bezuidenhout