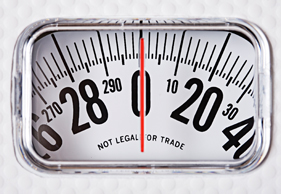 It has happened to millions of people. You finish school, head out to the ‘real world’ of working hard and trying to create a future. Before you know it, you’ve settled down, started a family, and then suddenly something resembling a spare wheel appears around your middle. This is exactly what happened to Magz Khomane, but the difference is that she decided to take her life back after a vicious battle with her weight for almost four years.

MAKING THE DECISION
It all started with the birth of her son, Kagisho, five years ago. “For the first three years of his life, Kagisho was sick and in hospital almost every three months. He had seizures and was on different antibiotics every month. I changed jobs quite frequently during this time and started neglecting myself by eating wrongly, worrying all the time, not exercising and falling into bad habits.”

“When I realised I had grown too big for my size 42 clothes, it was the last straw. At my heaviest I weighed about 115kg. I suffered from high blood pressure, insomnia and migraines, never smiled, and was pretty much depressed. When my doctor told me I will have to take medication to control my blood pressure for the rest of my life, I decided; ‘hell no!’ I decided then and there to lose weight and take my life back.”

“A friend of mine had told me about Adventure Boot Camp (ABC) for women. I had seen her go from plump to ripped in a few months, so I decided to join her at ABC. For the first two weeks my body was in shock. I’ve always been athletic, but hadn’t exercised in a long time. I also felt guilty at first, because I thought I was being selfish for taking an hour every day for myself rather than being with Kagisho.”

But Magz soon realised that an hour away from Kagisho every day was a far better choice than possibly not being there for him at all if she carried on with her unhealthy lifestyle. “I had to make sure I live so I could look after my son. You can’t allow something to kill you if you have control over it. When you’re a single mom, it’s difficult to leave your child and just take time for yourself, but you have to do it for yourself. You are of no use to anybody if you’re not happy.”

SEEING THE KILOGRAMS MELT AWAY!
Magz religiously stuck to her early morning training schedule at Adventure Bootcamp at Emmarentia in Johannesburg. This involved an hour long session three times a week of a jogging, sprinting, push-ups, sit-ups, skipping rope, core conditioning and much more!

Soon Magz could see the difference in her body and this motivated her even more to stick to her exercising guns. She combined her training with a healthy eating plan. “I was not on a strict diet where I ate three fruits and five veggies every day. I made a major mental shift. These days I don’t eat as much starch as I used to, I’ve decreased my portion sizes, I don’t eat if I’m not hungry, and I drink lots of water. Previously I didn’t use to eat at work and then binged when I went home, because I was famished. Now I eat breakfast, a pre-packed lunch, and I only boil, steam and grill my food… no more frying!”

Her commitment paid off and she went from 105kg in July to 75kg today. She plans to lose another 10kg by her birthday in February, to ‘officially bring sexy back.’ An avid volleyball player in her younger years, she plans on hitting the courts again in the New Year to keep her fitness levels up, and has also taken up golf to help her unwind.

TAKING HER LIFE BACK
Magz is a firm believer in mind over matter and says if it wasn’t for her attitude she wouldn’t have lost 30kg. “I started exercising with the attitude that I have to do this and I’m going to do this no matter what!” Her attitude obviously paid off and Magz’ philosophy on exercise and endurance can serve as inspiration to many a runner. “You need dedication if you want to achieve success, but your mind is stronger than your body, so it’s easy to fool your body. If you tell your body that it can keep going, it will just play along.”

She is philosophical about her weight-loss journey and says that nothing that has happened to her during the past four years has been without reason. “You learn from everything and it makes you stronger. You have to decide for yourself how you’re going to deal with difficult situations and then go through with the decision.”

Magz tries to take part in a fun run or walk every month, and always takes Kagisho with her. Since she has lost the weight, she is smiling again, her migraines have disappeared and her blood pressure is under control. In short, she has taken her life back!