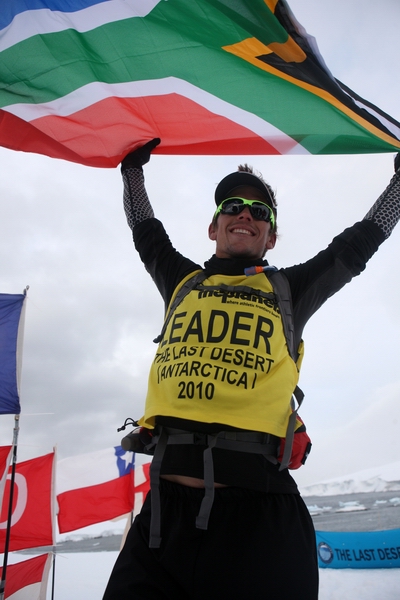 The “Last Desert” done and dusted..

The last week has been an insane experience and a once in a lifetime opportunity to see Antarctica. Yesterday was defiantly the highlight of the trip…we woke up to views of massive white floating ice mountains and there were orca’s, whales and penguins playing next to our boat. Then later that day competitors ran the last stage of the “Last Desert”… running the last 2.3km loop I realised I had done it and my goal / dream to complete the 4 Desert series was coming true. To win all 4 Deserts was a bonus and really rewarding for some long hours of training over the past two years. I was elated crossing the finish line with a South African flag in hand but also relieved to have “done it” as I felt the pressure leading up to the race.

Looking back at the last two stages (3 and 4)… I ran a 100km on stage three which was 40 loops of 2.5km. This stage took place on Deception Island and the scenery was awesome! We started running in a blizzard and visibility was not great but after about two hours the weather cleared and it turned into perfect running conditions. We ran along the beach and looped around a “small hill” which felt like a mountain at times. Running past old whaling stations, baby penguins and loads of birds took my mind off the monotony of running 2.5km loops and the first 15 loops flew by. Then I hit the wall – I felt directionless and did not know when we were going to finish the stage… probably only if the weather turned bad. I felt a bit like a hamster on a turning wheel and had to dig deep to keep focused and keep up the tempo. The next 20 loops were a hard slog…  Then competitors were told we were finishing at 5:30pm as the weather was turning bad…I now had a goal of completing 40 loops /100km. Once again time flew by and before I knew it I was boarding the zodiac to head back to the ship. With only one stage to go I could feel my goal /dream was in sight.

The last and yesterday’s stage took place in Dorian Bay and we ran on a massive glacier. This stage had the toughest running conditions and the first 2.3km loop was a power walk in knee deep and at times waist deep snow. After the first loop competitors had compacted the snow and running was a bit easier but still very slow. I had to concentrate the whole time as one miss placed step could have led to sprained ankle etc. This was by far the most beautiful stage and the views from on top of the glacier were spectacular.  As I said running was slow and technical but this was it…the last stage of the “Last Desert”. I took my time running the last loop; soaked up the experience and reflected on my journey over the past two years and a bit.  Whoo Hoo I had done it!!

We are currently heading back to Ushuaia in some pretty rough seas but are hoping to miss the massive storm… Faaaak!!

A massive thanks to Velocity Sports Lab, Salomon, Red Bull, Oakley, Suunto, Hammer Nutrition and Imazine for making my dream come true!! Thanks Ian, Chris, Benita, Sally, Tara, Willie for helping me cross the finish in one piece!! Kelly thanks for keeping everyone posted and getting me out there!!    Thanks to everyone for your support and messages of encouragement, these kept me going through the tough times and I could not have achieved this without you!!

Ok time for some breakfast… I will post a race report in the next week or so.