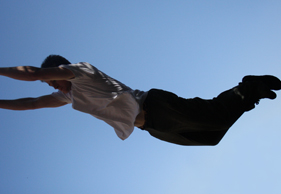 You’ve probably seen them either in a movie, advert or on a YouTube video. Most of them look like Spidermen scaling walls or jumping off three-story buildings. They blitz through city streets, run from obstacle to obstacle, and instead of running around these obstacles – like most of us – they choose to run over them! They call themselves Traceurs and they’re doing Parkour, better known as ‘Free Running,’ something that is slowly taking South Africa by storm.

Just recently the very first Free Running race, or so-called Urbanathlon, was held in Johannesburg. Participants ran, crawled and climbed 12km through the urban sprawl of Sandton. They had to negotiate a massive inflatable obstacle course, slide down a fireman’s pole, scale a climbing wall, stride across balance beams and descend 258 steps… not your average road race!

CHILD’S PLAY
It all started with two Frenchmen, David Belle and S?bastien Foucan. As youngsters the two friends amused themselves in their backyards by running from obstacle to obstacle and jumping over them. Little did they know that their fooling around was to develop into a sporting discipline with jaw-dropping visual effects.

The public first became aware of Free Running in 2003 when the BBC aired a documentary about this new phenomenon called Jump London. This film is widely regarded as a turning point for Free Running, as the broadcast helped it gain so much momentum that it became an international movement.

The word parkour is French for ‘obstacle’ and this essentially encapsulates what free running is all about. Where parkour aims to enable someone to move smoothly, quickly and efficiently past obstacles, Free Running has a greater emphasis on self-expression within the environment. Though there is a difference between the two, the terms are often used interchangeably. Within both disciplines, you will see elements of gymnastics, dancing and martial arts. Both disciplines produce some pretty spectacular physical feats, but despite the visual delights, Free Running followers believe there is much more to it than just looking cool!

CHALLENGING YOUR BODY
Although the big jumps are usually what you see when the media showcases free running, this is only a small part of the discipline, says Dane Grant, founder of Free Running in South Africa. “I dislike it when someone asks me what the highest jump is I’ve ever done. Any idiot can jump off a roof! Parkour is about training your body in a natural way to be as strong and useful as you can possibly be. It is pointless to have huge muscles and not be able to do anything with them.”

Dane lived in London some years ago and met one of the founders. He soon started learning the tricks of the trade before becoming part of one of the most respected Free Running teams, Team Traceur. He brought his passion to South Africa and introduced new people to the sport every time he returned to his home country.

Dane fondly remembers the early days of Free Running in South Africa. “I was handing out pamphlets on the streets of Pretoria and leaving them under students’ car windshield wipers to advertise our sessions. We mostly met at the Union Buildings or at the University of Pretoria, but we actually had no idea what we were doing!”

A MATURE FREE RUNNER
It takes about two years for a Free Runner to reach maturity. “By then you usually start questioning your reasons for Free Running. After two years most people are past the honeymoon stage and the idea of being cool is no longer enough of a reason to keep at it,” says Dane. “Free Running can be a huge sacrifice and you have to push yourself to improve all the time. It involves so much more than jumping off high things. It’s about moving smoothly and fluidly through your environment. I believe it has a huge philosophical side to it.”

“It’s a personal journey for everyone. You start seeing life through the eyes of a child, where things are simpler and more fun. You don’t stop playing because you get old, you become old because you stop playing, and Free Running makes you realise it’s a playground out there.”

RUNNING VS FREE RUNNING
Free Running is an excellent form of training for seasoned road runners who are bored with their usual morning runs. Free Running can turn your morning jog into a creative, individual expression of yourself. You will look at your normal route in a completely different way and probably see things you have never seen before.

“Free Running takes your blinkers off and makes you see things differently. I am intensely aware of the environment around me. Where other people will barely notice a railing next to the road, I will see it as a challenge. I get a rush every time I clear an obstacle or make a jump. This keeps you alive, but you can never get too confident,” Says Dane.

Dane is adamant that injuries are no greater risk than in any other sport as long as Free Running is performed correctly and you do not try moves that you aren’t capable of yet. In the seven years that he has been jumping over walls and railings, he has only been injured twice. “If you practise Free Running smartly, then there is no reason for you to get injured. If you do get injured, however, it’s all about how you recover and come out of it.”

RUNNING FREE IN SA
The South African Free Running community is growing slowly, with about 2000 people on Dane’s national e-mail database. The hub of the community is in Johannesburg, while other big cities like Pretoria, Cape Town, Port Elizabeth and Pietermaritzburg also have active communities. Dane’s future plans for Free Running in South Africa include updating their website and creating a space where anyone can log on to see where the best free running routes in every city are.

So if you feel a little adventurous, maybe it’s time you try the roll, the tic-tac, the pop vault or even the drop jump. Trying to explain these in print is near impossible and when you see someone Free Running you soon realise that this activity is a little like the movie The Matrix… no-one can explain to you what it is, you have to experience it for yourself!

Log onto www.modernathlete.co.za and check out our cool video on Free Running.

HOW DO I GET STARTED?
Dane presents weekly workshops in Johannesburg that teach essential Free Running skills, and anyone is welcome. “We mostly have adventurous people signing up, but we do have a big mix of participants. Free Running isn’t restricted to the super fit, but basic fitness is required to progress. To excel, you have to put in the hours.” Sessions cost R60 and are held on Thursday evenings from 5:30pm to 8pm and Sunday mornings from 10am to 12:30. Visit www.parkour.co.za for more information.