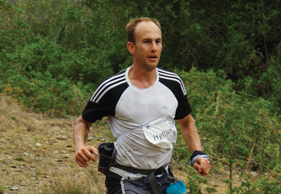 My mate and I are both competitive by nature, but after running a few races earlier this year we came to the realisation that for us running is all about the view, finding a happy place and the recovery beer and braai. Over the past year we have spent quite a bit of time stumbling along the cattle paths and through the valley forests of the lower Albany farming district, and when the opportunity came to participate in the Liberty Health Baviaanskloof Trail Run, we grabbed it. – BY ANTHONY BERNARD

The Baviaanskloof run is organised by Darrell and Evie Raubenheimer of ‘Rhodes Run’ fame. This year was only the second instalment, but you’d be excused for thinking that they had been doing it for years! With weekly e-mails building up your excitement, and jam-packed hand-sewn goody bags, it felt that no expense was spared.

Apart from getting to run in a World Heritage Site, the run also provided a good excuse for a boys’ weekend away, so we packed beers and steak, tossed our takkies in the bakkie and headed for the so-called Mountain of the Baboons. We were lucky to get a campsite in the Geelhoutbos section of the Reserve and were quickly reminded that we were the guests in the area as we walked into a herd of buffalo 50m from our tent!

A SPECIAL START
The run started from an old forestry cabin at the end of the Geelhoutboskloof. A small crowd gathered around anxiously for the final race briefing, which warned of a buffalo herd still near the trail and of a black rhino and leopard seen by the recce team near the trail the day before. We were also reminded of the strict no-litter policy – there are no cups at the feeding station and every participant had to carry their own cup.

The start of the run is kind, allowing rusty legs a gentle 8km loop to warm up and spreading the pack before the climb up the mountains. The hill that followed was less than kind, and as with all good hills, it never ended beyond the next corner. The route follows an old double track that got progressively less distinct as we made our way closer to the highest point at approximately the 25km mark.

REFUELLING WITH KOEKSISTERS
We were greeted by the only refreshment station (voted the best at prize-giving) where we caught our breath, refuelled on homemade koeksisters, and reflected on the beautiful surroundings. From this point the route became single track, often disappearing in the grasslands, but our weary legs were buoyed by the excitement of running through the technical terrain! The final section of the run took us down a steep slope, which was a good time to stop and admire the ruggedness of where we had been. No matter how sore our legs were, we could not help but crack a smile of pure satisfaction at our achievement!

Sitting on the lawn at the finish, we shared war-stories about rolled ankles, rock-ripped knees and bums and shoes trashed by the scree. We’ll be back; we simply have to get one of those outstanding framed Liberty Health and UTI Legend awards, and of course get to see the buffalo again.