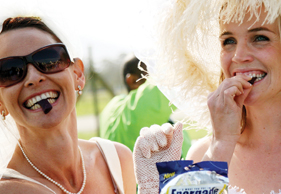 Imagine 24 brides all dressed up in their beautiful wedding gowns. Now imagine the same 24 brides lining up and dicing each other to a finish line in those same pretty dresses! The end result is a unique and hilarious 1km Bride’s Dash held in the Southern Cape.

The first Tramonto Wedding Run was held this year in the small town of Geelhoutboom, outside George. With over 300 athletes entering the race in the first year, the Wedding Run can only go from strength to strength! Entrants could choose between a 10km and a 5km race, but the highlight of the day was of course the 1km Bride’s Dash!

The day was blessed with beautiful sunshine, mouth-watering food and lots of laughter. The race was sponsored by Southern Cape wedding planners Tramonto, who initially came up with the idea of hosting a race at their venue. The Nedbank Running Club in George, which organised the race, took it one step further and suggested a 1km Bride’s Dash, with one requirement: all entrants had to wear wedding dresses.

Together with the NLR Wine Trade show, with its 16 top class farms and a lively performance by popular band Watershed, the scene was set for a perfect day out! There were some awesome performances over the 10km and 5km distances, but it was the 1km Bride’s Dash that stole the show. Seeing 24 women dressed up in their (or borrowed!) wedding gowns, ready to race 1km, was surely unique, and hilarious! Prizes of R5 000 were up for grabs, with Tanya Weyers crossing the line first while Bianca Serfontein was crowned as the best dressed bride.

The club plans to add a half marathon next year, and the Bride’s Dash looks set to become an annual tradition, so get those dresses ready for next year and don’t miss out on the fun. The next date is set for 20 August 2011.