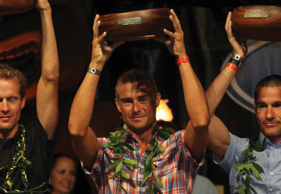 South Africa’s Man of Steel recently made his country proud when he finished fifth at the holy grail of triathlon, the Kona Ironman World Champs. Raynard Tissink shares his race-day experience with Modern Athlete.

As usual, Ironman morning started with a 4am wake-up call, a cup of coffee, a light breakfast, and a final check to make sure I had everything for the swim. With everything else already checked in the day before, there’s really not a lot to get stressed about, and after a short warm-up jog, at 6:15am I was in the water. One major difference between the World Championships and any other Ironman race is the swim start. At any other race, if I swim well I can get away into clear water with four or five friends for company. At the World Champs, however, I have 40 or 50 not so friendly competitors trying to drown me, and as the cannon sounded, I got an elbow, or a foot or a fist, squarely in the left eye! A couple of strokes later, a kick to the side, and the swim became more a fight for survival.

Somehow I made it through the initial mayhem and after about 1 000m things settled down, until the turn-around, when someone decided to get a move on. The group started splitting up, but with just a little over a quarter of the swim left, I knew they wouldn’t get too far away, and I had two of the strongest cyclists in the group with me.

FIGHTING MY WAY BACK
Exiting the swim in 52:25, about a minute behind main contenders Chris McCormack, Craig Alexander, Andreas Raelert, and former Ironman SA winner Marino Vanhoenacker, the group I was in quickly made its way back to the main bunch. The first hour on the bike in Hawaii is always insane, resembling an Olympic distance more than an Ironman, with average speeds around 42.5km/h. When ?ber-biker, Normann Stadler, caught the bunch after 50km, he started stirring up some action and a few cyclists managed to get away from the group. I was content to wait until 90km, when the long climb to the turn-around was sure to break the bunch up. At the bottom of the climb, the cross-wind was so strong that I was struggling to stay in my aerobars, and the pace slowed dramatically, so I decided to go to the front of the bunch. I took a little glance over my shoulder and saw a figure just behind me, so I figured that everyone was happy with the pace I was setting into the gale-force wind. It was an absolute shock when I got to the turn to find only Chris McCormack (Macca) with me and the bunch more than two minutes behind!

With the breakaway group about 90 seconds ahead, I was suddenly filled with confidence, and Macca and I chased hard. Even though I was really struggling to control my bike, we were still fast enough to catch back up to Stadler, Raelert and the likes, although Chris Leito, Maik Twelsiek and Vanhoenacker had gone away from them. Still, I was into the top 10 and only four minutes behind the leader, a position I had never been in before in my two previous top 10 positions here in 2004 and 2005! With 20km to go up the final significant hill, Macca tried to go off the front of our small group, and I decided to go with him. Slowly, we pulled away from some of the biggest names in triathlon cycling and came into transition in fourth place with a 4:30min bike time! I remember feeling happy that I was a big part of this race already, no matter what happened next.

SOUTH AFRICAN SURPRISE!
I took my time preparing for the run and Macca was gone immediately, so heading out in fifth place felt great. Clearly nobody was expecting me to be up there, as many comments were somewhere along the lines of: “You’re looking great, but who are you?” My pace along the famed Alii Drive was steady and controlled around 4min/km, knowing that the real race starts when you hit the Queen K and out to the Energy Lab.

Raelert moved past me at 4km, and I thought about trying to stay with him, but his pace was too uncomfortable for me, so I dropped down to sixth. I stayed smooth and steady until the big climb up Palani Hill at 16km, and for the first time since my near drowning at the start, I started feeling a little uncomfortable and my pace faltered. The temperature off the road was in the region of 48?C, and I was feeling every degree, but tried to focus on all those training sessions in scorching conditions in Tucson.

From the halfway point, the run became a quest from one water point to the next, a distance of about one mile. My spirits were lifted slightly after passing Twelsiek, and then even more passing bike leader Leito and moving into fourth at 30km. Shortly thereafter, defending World Champion Craig Alexander passed me, though, so I was back into fifth with 10km to go and a narrow 90-second cushion on a host of charging Germans and a Spaniard.

JOB WELL DONE
With 4km to go, I still had a 50-second cushion. For the first time racing in Hawaii I could relax and enjoy the finish atmosphere, high-fiving spectators and even stopping to give my wife Natalie a kiss before crossing the line in 8:20:11 (a time good enough for the win last year), to achieve fifth place in one of the greatest fields ever at the race. With nine former world champions competing, I feel it was a job well done! So after nearly five months on the road, the big show is done. We’d like to thank everyone who supported us, and a big thank you to my sponsors for their continued belief in me.