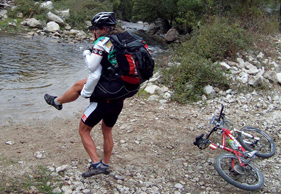 Adventure racing is exactly what the name promises: an adventure that allows you to experience places and scenery that not many people get to see, while racing many exciting and different sporting disciplines. Each person that competes in an adventure race usually says they came out of it with a new philosophy on how to tackle life! And though it’s a sometimes gruelling adventure, it is definitely not just a sport for hardcore elites. It is for anyone who wants to experience the wonder and beauty of nature with a couple of sporty mates.

Adventure racing is a non-stop multi-disciplined sport in which some races can be as short as 30km and some as long as a 1000km! It can take competitors from two hours to 10 days non-stop to complete a race. And of course, the first team to cross the finish line wins. All navigation is done with a map and compass to reach various transition areas where you change from one discipline to another. At big races, each team must comprise four people, of which one has to be of the opposite sex. The stronger teams therefore consist of three men and one woman. An interesting aspect of adventure racing is that a team needs to stay together at all times and be within 100m of each other.

Races include a variety of disciplines, but the main sports are generally trail running/hiking, mountain biking and paddling. Other disciplines involve inline skating, some sort of rope work, swimming and rafting. Running/hiking is the most important discipline as competitors spend the most time doing this.

THE MERRY MERRELS
With nicknames such as Tweet, Hobbit, Houtkapper and Eye Candy, it is no surprise that the Merrell Adventure Addicts have loads of fun. But don’t let their nicknames mislead you, all of them are accomplished athletes in their own right. The team recently competed in the Adventure Racing World Championships in Spain, where they were one of 61 teams from 26 countries around the world. After 720km they finished in 14th position. Though not one of their best races, because of mechanical mishaps, it was another race that brought them closer as a team and made each of them even stronger in the process. The team is currently taking an end-of-year break, but they’ll be back in action in early 2011 as they start building up to the World Champs in Tasmania, Australia in October.

The team is lead by Graham Bird, better known as Tweet, who fell in love with adventure racing after competing in a short 30km race in 2004. He has been one of South Africa’s top canoeists since the early nineties, winning 28 South African titles and finishing in numerous top five placings at World Canoeing Championships and World Cup events all over the world. “Adventure racing is a spiritual journey for each person. You learn and discover new things about yourself, you re-look and adjust your outlook on all things, from life in general to small issues, and you definitely come out of each race with a new philosophy on how to tackle things,” he says.

Graham is the navigator in the team, which he says is mentally hard, “because you have to concentrate all the time while the team members just follow.” Donovan Sims – better known as the ‘Eye Candy’ – serves as a back-up navigator. Donovan’s strengths lie in the fact that he is not strong in any one discipline, but pretty much the same throughout all of them. That applies throughout the team, with all the members very similarly skilled. “You can’t put a strong cyclist who can’t run with a strong runner who can’t cycle. They will get frustrated with each other! A successful team consists of four people who are similarly skilled across all sports,” says Graham.

The only woman in the team is Tatum ‘Hobbit’ Prins, who is the jovial and outgoing one. “This sport is so incredible. It has this way of humbling you. You end up having this love-hate relationship with it. One minute you are crying and ready to call it quits, and the next you are laughing hysterically and loving every second. Quite simply, it’s a beautiful kind of crazy! Your highs and lows are amazing, so much so you can’t understand them. All I know is adventure racing sucks you in and keeps you there. It bares your soul. At times it rips it apart and just lays it open for all to see. It teaches you the importance of living life. It puts life into perspective. It teaches you to never give up, to keep looking forward. It pushes your limits. It shows you the importance of having three friends as team mates, because without them in adventure racing you are nothing. They are your world for those five days. It’s you, them and the elements. Life becomes simple again.”

As in each team there is always one solid, consistent member and with the Merrell Adventure Addicts it is no different. Hanno Smit, also known as ‘Houtkapper’ or ‘Smelly’, is this guy! He is also an accomplished paddler and the only person to partner Martin Dreyer on the Dusi and not win just once, but twice!

WHEN THE GOING GETS TOUGH
The essence of adventure racing consists of teamwork and support. “We all go through bad patches. That is bound to happen over 1000km of racing, but we pull each other through every time. Sometimes we go 45 hours without sleeping. We have done races where we got to the end and had only slept two or three hours in four days! Adventure racing is an extreme sport but mostly a mental challenge, one you need to be prepared for,” says Graham. Team members are also often relieved to change from one discipline to another. “After 60km of hiking or trekking you just want to get onto your bicycle, but then halfway through you just want to get back on your running legs!”

Each team member carries equipment and food – generally things such as a rain jacket, thermal clothing, a space blanket, knife, safety rope, mobile phone and a first aid kit are compulsory items. One needs to be ready for any emergency, as teams can often go days without seeing anybody. If you take a wrong turn it can cost you up to 12 hours of extra racing. “We have raced in Australia where the organisers thought it would take 20 hours to complete, but it took us 36 hours! We did not see another team for 26 hours and we were totally in the wild with no cars and no other human beings!”

TRAINING
So if you race for 1000km, surely that involves excessive training in many different disciplines? “No way! If you train excessively you will never be able to race well. We make sure we are competent in running, biking and paddling, and train these disciplines consistently during the week with longer sessions over the weekends. We are experienced and know by now how to get through 40-50 hours of racing for days on end. Once you race for longer than two days it becomes a mental game and not only just about how much you have trained.”

The team members are all competent in rope work, inline skating and other disciplines, and don’t really need to train this often. Novices to adventure racing will naturally have to become competent in these elements, though there are many beginner adventure races that only involve running, paddling and biking, a superb way for a newbie to get into the sport.

RACING WITH A DIFFERENCE
One of the most exciting things is that in each race the environment differs. Some terrain can be so overgrown that it could take you up to an hour to cover 1km! “One year we did a race in Brazil where we started right in Rio de Janeiro. From there we paddled out across the bay before landing in the jungle and later on the beach! The next year we went back and raced in the dessert in temperatures of 50 degrees. Recently in Spain, the terrain was more urban and we raced over mountain ranges, on tracks, through small villages and up mountains again.”

Another notable feature of these events are their finish lines: don’t expect anything like the Comrades Marathon or any other road race or triathlon, where hundreds, sometimes thousands of spectators wait and cheer. Often adventure teams finish hours apart and it can happen that a team gets to the finish line with hardly any spectators. “All you want to do when you finish is shower, eat something decent and sleep! I have slept 15 hours non-stop after a race.”

THE BEAUTY OF IT ALL
The most incredible thing about adventure racing is definitely the beauty of the sport. “We get to places that the public don’t get to. I have abseiled off waterfalls and 200m cliffs, and I have been on major rocks in the Utah dessert. I have been dehydrated because I haven’t had water for 10 hours in 50 degree heat, I have been overhydrated because of too much water, and I have been so freezing cold I could not feel a single thing on my body!”

“As a team we experience the highs and the lows, the joys and sadness, the pain and suffering, and the tiredness. It makes us stronger mentally and physically. It shows us just what our bodies and minds are capable of. We all love being outdoors, that’s what we live by and why we get on as a team.”

HOW DO I TRY IT OUT?
There are many novice races around to get you started. It is best to start with shorter races of 30km and build up before you tackle the longer multi-day races. “The main thing is to believe that you can do it! Some people think they can’t race for so long. You just need to overcome your mind and fear. If you can do one to two hours of mountain biking or one to two hours of running, you can do adventure racing. It is definitely not just for elite athletes,” says Graham.