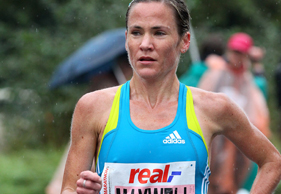 September was a busy month for Tanith Maxwell as she competed in the Bristol Half Marathon and the Berlin Marathon only three weeks apart. Both races were run in cold, wet and windy conditions, but Tanith still managed a second place in Bristol and a personal best of 2:32:33 in Berlin, where she not only finished eighth, but also ran the fourth-fastest woman’s marathon time in South African history! Tanith, a member of Boxer Superstores Athletic Club in Durban, shares her race experience with Modern Athlete.

I woke to pouring rain on the day of the Berlin Marathon. The weather showed no sign of improving and I realised this was going to be with us from the start to the finish! Apparently the running conditions were the worst they have been in the last 20 years.

One cannot comprehend the magnitude of this race until you are standing on the start line with about 40 000 runners lining up behind you! The starter fired the gun at 9:03am exactly and we were off. It seemed like a jumble of puddles, feet and shouting over the first 5km. The top three girls were running very slowly and I was concerned that their pace was even slower than the pace I had decided to run at!

DIGGING DEEP
The local favourite, Sabrina Mockenhaupt, was in my group and was looked after by at least three male pacers. We went through the 5km split in 18:07 and it was from there that the pace changed drastically. I was able to settle into my pace and joined a bunch of male runners. The ruts in the road filled with water made the running conditions even more difficult, and there was no way to keep one’s shoes dry.

My second 5km split was considerably faster and I knew I needed to slow down and rather conserve myself for the second half of the race. I went through the 15km mark in 53:19 and my halfway split was just over 1:15. Everything felt great, the crowd support had been good despite the wet conditions, and it was only at the 38km mark that things began to get tough. I really needed to dig deep over the closing kilometres to keep my target time in place.

A PB IN SIGHT
Turning at the 41km mark and seeing the Brandenburg Gate in the distance was a fantastic incentive and I knew that I was on my way to a PB. What a special feeling! Unfortunately, in the final 50m I was passed by a Brazilian girl at such a speed that I was unable to even respond to her challenge. She crossed the line three seconds in front of me!

The marathon had its challenges. I didn’t have my special drinks bottle in the first 15km and the weather was really bad, but I was very pleased that I overcame these challenges and managed to achieve my goal. My next goal is the London Marathon next year, where I have already secured my invite.

TANITH ON BRISTOL
The Bristol Half Marathon, with an entry of some 18 000 runners, lined up near the Millenium Square on the harbour side of Bristol. The race was quick from the start and I am ecstatic about my second position in a time of 1:14:33.