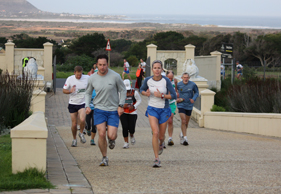 The annual Satori Camel Run is not for sissies. Runners are usually found stumbling around Noordhoek in a haze of happiness and pain, muttering about the longest and most agonising 16km they’ve ever run… and the most beautiful! Donv? Lee shares her race day experience with Modern Athlete.

The first Camel Run in 2008 attracted about 400 runners. This year 877 intrepid runners gathered at the start, and for the first time the weather gods were smiling on race day, as it was cool, dry and windless.

Before the race there was much speculation among the runners as to why the race was called the Camel Run. Perhaps there is no water on the route! Could this leafy suburb possibly hide a little desert? Do the two big hills on the route represent the two humps of a camel? A Noordhoek resident, reading about the race in a community newsletter, even expected a herd of camels to storm past her house!

But the herd that thundered through the streets on this glorious spring day were two-legged, not two-humped, and the route through the tranquil tree-lined suburb was full of surprises. There were guinea fowl in the streets, squirrels in the trees, and alpacas at Ohio Farm. There were equestrian estates, scarecrows at Noordhoek Farm Village, a tough stretch of sand along a golden beach and a forest of Milkwoods at Monkey Valley Resort below Chapman’s Peak.

The formidable uphill climb through the ‘Vineyard Valley of Tears’ was a surprise that some runners would have happily done without, but the magnificent scenery made up for the pain. One delighted runner sailed down the hill singing, ‘I feel like Julie Andrews in the Sound of Music!’

For this year’s winner, Diko Sityhilo from Gauteng, it was the culmination of an exhausting but triumphant weekend. Diko sailed through the finish line in a time of 1:00, having won the Riebeeck Kasteel Half Marathon the day before The first woman home was Dain Hamilton in a time of 1:16.

So where does the name Camel Run come from? “A friend told me that I sound like a camel when I run,” chuckles Charissa Balman, founder of the organising club, Satori Athletics Club.