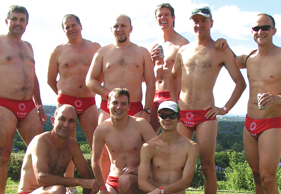 More than 600 men clad in nothing but bright red Speedos and running shoes took to the streets of a quiet suburb in Johannesburg for a quick 4km run. Don’t be mistaken, it wasn’t just a bunch of boys being boys, it was all for a good cause. A few brave runners from Overkruin Athletic Club in Pretoria decided to join in the festivities, and Leon Marais shares his experience with Modern Athlete.

The ETANA daREDevil run is organised by ETANA Insurance with the purpose of raising awareness of the dangers of testicular and prostate cancer, and this year’s event once again attracted men of all shapes and sizes. All the men were brave enough to put aside the commonly-held belief that Speedos are ‘uncool’ and chose to focus on bigger issues.

Most of the runners shared only one concern on the day: ‘Did I pick the right size Speedo?’ For the briefest of moments, wearing a Speedo was sexy and the runners and spectators enjoyed every minute as drivers stuck in Friday afternoon traffic couldn’t help but stare as the scantily clad men jogged past them.

The event attempted to set a new Guinness World Record by gathering the largest amount of Speedo-clad men in order to strengthen the message and spread it beyond our country’s borders. Hopefully next year there will be even more runners. The more men who take part, the stronger the global message will be! And of course, for once women can stop and stare at scantily dressed men!