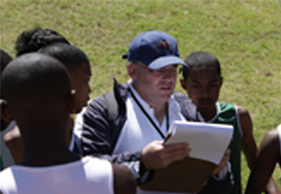 Following a year of turmoil and upheaval for the sport of athletics, the national federation finally appears to be on the road to recovery. Leading this process is James Evans of Western Province Athletics, and Modern Athlete caught up with him to ask how things are going. – BY CATHARINA ROBBERTZE

It’s been a stormy ride for Athletics South Africa (ASA) over the past year. Kicking off with the Caster Semenya saga in October 2009, things went from bad to worse for the embattled organisation as alleged misconduct and financial mismanagement were revealed. The South African Sports Confederation and Olympics Committee (SASCOC) stepped in to take control last November, suspended ASA President Leonard Chuene and several board and staff members, and appointed an interim board, many of whom subsequently resigned for various reasons.

Now a new ASA board has been elected and will function without a president or vice-president due to the incumbents still being suspended pending further investigation. In the meantime, James Evans has been chosen as chairperson of the new board, which carries the heavy burden of getting athletics back on track.

The new ASA board was recently elected and had its first board meeting. How are things going?
I think we have a good combination of athletes, administrators and professionals on the board. We had a good first meeting and discussed quite a few important issues like next year’s championship dates. I think the board members will feel free to disagree with each other and hopefully they won’t ever walk out of a meeting where they feel like they didn’t have their say.

How do you start to fix things?
There are two major areas that need to be sorted out, finances and the athletics programme. The finance issue is difficult as SASCOC is still in control and we can’t determine what we owe. The athletics programme is easier because Yellow Pages is still on board as a major sponsor, but we are talking to other sponsors to improve our situation. We have to restore confidence in the organisation, most importantly from the athletes’ side, and secondly in the corporate sector. We can only do this by improving communication between ourselves and our stakeholders. In the past too many decisions were taken without communicating them.

Do you think you will be able to regain the trust of local athletes?
The fact that so many top athletes are on the board should make a big difference.

What are your goals for 2012 and beyond?
We have some pretty decent athletes for the 2012 Olympics, including some of the best 1500m athletes in the world. Our biggest problem lies beyond 2012 and where the next tier of athletes will come from. We also need to develop a proper club structure in athletics, because at the moment our only viable athletics clubs are student clubs. A big goal is to ensure the athletics programme is as entertaining as in the past, which will drive spectators to stadiums.

Will it hold you back to operate without a president or vice-president?
Not necessarily. If we function properly it will show that one person is not needed to run ASA, it is too big an organisation. It does mean that we cannot do some things and take certain decisions as quickly as we would like to, but this can be a good thing, because it means no decision can be taken autonomously.

Does ASA have plans for road running in the future?
South Africa is one of the leading ultra-distance countries in the world, but we don’t recognise ourselves as that. Big races like the Soweto and Cape Town marathons should be international brands and marketed that way. We would like to transform our races into races of international quality.

Modern Athlete would like to wish the new board all the best with the massive task they face of putting the sport we all love so much ‘back on track!’ We appeal to all runners to support the new board with an open mind and to get involved in any way possible to assisting in improving the future of running in South Africa.