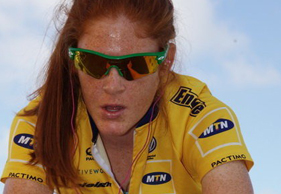 November in Johannesburg is traditionally known as cycling month, with thousands of cyclists taking to the streets to participate in one of the country’s biggest cycling events, the 94.7 Momentum Cycle Challenge. Modern Athlete thought it was a good time to chat to South African Carla Swart, top cyclist and runner, who lives in the USA, where she is regarded as the ‘Superwoman of Collegiate Cycling’. – BY MICHELLE PIETERS

She has been described as the United States’ best-ever female collegiate cyclist and it seems as if every year has been better than the previous for Carla Swart. Though 2008 has been described as her breakthrough year, the next year was even better, and so was 2010! This year she has claimed 11 national (both individual and team) titles in road, mountain bike, cyclocross and track. Grabbing that many jerseys in a single year is a feat no collegiate racer, man or woman, has yet accomplished in the history of the National Collegiate Cycling Association!

Carla currently rides for Team MTN/Energade (South Africa) and Team Vera Bradley Foundation (USA). In 2011 she will be riding for Team HTC Columbia, the most successful women’s team in professional cycling.

SOUTH AFRICAN AT HEART
Carla grew up in George and has played netball, hockey, soccer and ultimate frisbee, ran cross-country and track, and also did karate for a long time. She used to be a SA national champion in karate! At the age of 15, her family moved to Georgia in the USA, before Carla headed for Banner Elk, North Carolina to study Sport Management and Business Administration at Lees-McRae College (LMC).

“I’ve been studying in Banner Elk since 2006 and absolutely love it. The training is perfect because it’s in the mountains. I can ride my bike for three hours and not cross one traffic light!” she says. “The university has a varsity cycling programme and cyclists from all over the world are recruited to attend and race for the school. We are usually ranked number one or two in the nation for cycling.”

A RUNNING CYCLIST
Though cycling is Carla’s main sport, she has been running since the tender age of 6. “Running is just something I’ve always done. It’s so simple! Running sets you free, in a way. I took it more seriously when I realised it could pay my college tuition! Running and cycling made it possible for me to attend LMC, a very expensive private university. I would never have been able to get the opportunities and education I am getting without being an athlete. Sport takes you places!”

Luckily she never had to choose between running and cycling. “I got a dual-scholarship to do both! Students only have four years of eligibility with the NCAA in the US, so I finished off my running career only a few months ago. That doesn’t mean I’ve stopped running. I still study at LMC and often go running with the team. It’s a great way to switch gears, and my body usually adapts fine when I want to run every so often!”

The running races she has done in the past four years have been mainly collegiate (NCAA) races. “I’ve made it to nationals two of the four years, while being on the all-conference and all-regional team all four years. I’ve held some high school records, while being team captain in my junior and senior year of track and cross-country running.” And her running fitness has certainly helped her cycling. “I don’t want my muscles to be too specific. When cyclists have been riding and racing for too long, they find it hard to adapt to other sporting activities. Running keeps my mind and body fresh. It’s a stress reliever. It also helps with climbing, and it’s a great way to keep fit during the off-season.”

Carla has some words of wisdom for aspiring athletes looking to make the transition from running to cycling: “Most try doing too much at one time. Be patient and make sure you rest and recover properly. Endurance sports can be taxing on the body, rather start off easy by riding only one to three times a week,” she says.

LOOKING AHEAD
Carla still has eight months of studying left, and she tries not to overload her schedule with too many classes, as she refuses to get bad grades. She hopes to represent South Africa at the Olympics in London in 2012, become a world champion, win major stage races, and be a valuable team-mate to her team. “I have cycling and non-cycling related goals. Life is about more than just cycling. I treasure all the moments and relationships I’ve been able to form while being an athlete. I do have goals, but for the most part, I like just ‘being’. I don’t like to plan too far ahead.”

Even though she doesn’t live in South Africa, the country is a huge inspiration to Carla. “I want to do well, because when I race, I don’t just represent myself or my team, I represent a country that shaped who I am today. I am proud of who I am, and if South Africans can show the world just how great we really are, we can inspire the entire world. South Africa has more soul to it than any other place I’ve ever been. My family also inspires me. The people you surround yourself with can make a huge impact on who you are and want to be.”