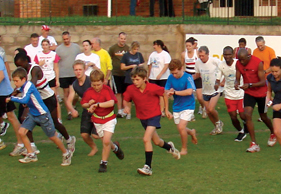 With a colourful history of more than 75 years, Collegians Harriers in Pietermaritzburg has left a rich legacy in the South African running community with its contribution to the success of the iconic Comrades Marathon. And though the club is one of the oldest in the country, the approximately 240 members at Collegians Harriers are by no means over the hill! – BY CATHARINA ROBBERTZE

From the word go, Harriers was set for great things, with several prominent citizens from Pietermaritzburg supporting the newly formed Maritzburg Harriers Athletics Club in 1933. Some of its first members included the legendary Bert Bendzulla, Skonk Nicholson and Piet van der Leeuw, with Dave Piper and Gordon Baker joining the club in later years. After becoming a sub-section of the Collegians Club in the 1950s, the club adapted its identity and has been known as Collegians Harriers ever since. A lot can happen in 75 years, and this club is a prime example of it. From hosting races and time trials for many years, to saving the Comrades Marathon, Collegians Harriers has taken it all in its stride.

HISTORY WITH THE COMRADES
The club had the rare honour of being instrumental in the success of the most iconic road race on the global ultra distance calendar, the Comrades Marathon. After taking over the organisation of the race in 1948, Collegians was in charge of the road between Maritzburg and Durban until 1981. As you can imagine, organisation of this huge event wasn’t easy: Logistical problems in the 1950s and political problems in the 1970s meant they had their hands full! Collegians then played a vital role in negotiations to transform the Comrades into a truly international race, open to both men and women, and people of all races – the first major event where this was allowed in South Africa.

As hosts, perhaps the club’s crowning glory came in 1979 when one of its top athletes, Piet Vorster won the Comrades in a time of 5:45:02, establishing a new record time for the ‘up’ run.

But it wasn’t only their organisation of the race that was important in the continuous existence of the Comrades, it was also the club’s realisation and acceptance that the race had become too big an event for a single club to organise. In 1981, Dave Barron, chairman of Collegians Harriers at the time, said: “We have barely enough members and support to run club affairs and Comrades is too important for us to allow selfish pride to interfere with the future of the race.” With this, a dedicated Comrades Committee was established and the future of the race was once again safe.

HERMAN’S DELIGHT
You can imagine that a club that can put on a 90km ultra would be able to produce a world class time trial and it seems only fitting that one of the oldest clubs in the country can boast one of the oldest time trials on the circuit. Herman’s Delight is a weekly time trial that has taken place every single week (bar the week between Christmas and New Year) for the last 50 years.

This time trial was started in July 1960 and named after Herman Delvin, one of the club’s stalwart committee members. Herman was hit by a truck in 1958 while out on a training run and lost his leg. This put an end to his running career, but he was still a firm believer in the inclusion of speed sessions in training. In 1960 he persuaded the club committee to stage a flat-out weekly time trial. Of course, watching his clubmates suffer gave him much delight, hence the name, Herman’s Delight!

Herman passed away in 1996, but the time trial still takes place every Tuesday evening at 5:30pm, starting from the clubhouse. With a choice of three distances, 2.8km, 4.4km and 7.3km, there is something for everyone. The ‘Silver Spoon’ is awarded every month to the person with the best percentage performance improvement on the longer course over two consecutive months. And to add a bit of fun to the normally serious efforts associated with time trials, once a year the club puts on the Bill Butler Memorial Handicap Run/Walk, which coincides with the club’s annual prize giving. Runners can start the 10km event at any time they wish, but they need to try and finish it as close as possible to 6pm…. without wearing a watch!

GREAT EVENTS
Collegians are the proud organisers of three races, the Umgeni Water Marathon, Braaiketts Longest Day and the Duke of York.
• The Umgeni Water Marathon offers three distances, 42.2km, 32km and 15km, and is held at the Midmar Dam Resort in Howick. This marathon has consistently proven to be one of the fastest in KZN over the past 13 years. Arnold Motsoeneng and Gwen van Lingen currently hold the course records at 2:26:28 and 2:55:08 respectively.
• The Braaiketts Longest Day is a 12-hour track race that takes place on the grass athletics track at Collegians Club, where participants who complete more than 80km receive a medal. It has grown from 47 participants at the inaugural race in 1996 to 87 in 2010.
• Another oldie at the club is the Duke of York 16km ‘Flying Scramble’. In 1926 a floating trophy was donated by the Duke of York Lodge to the then Pietermaritzburg Athletic and Cycling Club for the race and the first run took place in 1927.

COLOURFUL MEMBERS
Various athletic stars and even more colourful characters have graced the roads as members of Collegians Harriers. A few of these include Bert Bendzulla, who was the Natal 800m champion and record holder for several years. He was also a member of the club’s Comrades organising committee for many years and stayed involved with the race for years after it was passed to the Comrades Committee. Skonk Nicholson, an iconic figure in schoolboy rugby circles in Pietermaritzburg and coach of many Springbok rugby players at Maritzburg College. In his younger days he was the South African 1 000 yards record holder and South African Varsities Champion. Mike “Buthy” Arbuthnot founded the Midmar Mile in 1974 and has swam every year since then. He hardly misses a time trial and is a life member of the club.

MEET THE ELITES
Though every member is an important part of the club, there are always those who stand out with incredible achievements.
• Kerry Koen, who recently joined Nedbank and finished 11th in last year’s Comrades, was Collegians’ sportswoman of the year in 2008 and has been made an honorary life member.
• Muzi Madikwa finished this year’s Comrades in a brilliant time of 6:30:46. In 2007, just two months before Comrades, Muzi was hit by a car while cycling to work and had to spend three weeks in intensive care. Despite this he still managed a time of 8:04!
• Other remarkable members include the twins Sarah Gray and Kirsty Scott. Sarah has been nominated as the Collegians sportswoman of the year for 2010. Besides running she competes in endurance mountain biking events and swimming. Both sisters help with vast amounts of administrational work at the club.

THE SOUL OF THE CLUB
While elite athletes are important to all clubs, it is the middle of the pack runners who are the life and soul of any club. Amongst the Collegians ranks, here are a few stand-out members.
• Club captain Clive Willows is the club’s greatest motivator and always willing to help runners achieve their goals.
• Jannie Kruger is the all-round enthusiast. When you ask him for training tips, you might be kept busy for quite some time!
• Bev Douglas is the ‘consistent one.’ She never misses a time trial and come rain or shine, she is there to record everyone’s times.
• The club’s most capped Comrades runner is Terry Peterson, who finished his 28 Comrades this year. His wife, Belinda, is no slouch and has run 18 Comrades.

LET’S PARTY!
Every club needs a place where they can relax after a run and solve the world’s problems while enjoying a ‘boerie-roll’ and a beer. At Collegians they have Herman’s Haunt, the clubhouse located on the property of their mother club, Collegians. Every Tuesday you can be sure to find a number of club members at their pride and joy enjoying the fresh air of KZN. The clubhouse was renovated approximately five years ago as the facilities had become too small for club requirements.

Sundowners are enjoyed every Tuesday while a ‘braai nite’ is held every second Tuesday of the month. Other events such as a club weekend away keep things interesting for members. Their last weekend coincided with the South Coast Marathon and went down a storm.

Club members also find time to remember their less fortunate running mates and the club has recently launched an initiative where members can donate their second hand running shoes to those who cannot afford to buy their own shoes. Meanwhile, the club newsletter, Round Up, appears every second month and keeps members up to date with the comings and goings of their club and co-members.

“What makes Collegians Harriers different is the fact that we are the oldest club in Pietermaritzburg and we have a partnership with Collegians Club, which means we have access to a wide variety of sports facilities,” says Andr? Booysen, club chairman. This paired with the strong traditions and lively social life means that members get everything they can ever want from a running club.