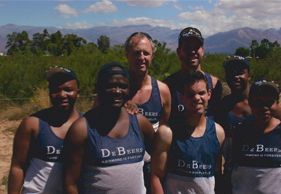 He has never seen the sun rise or set. He has never seen a lightning bolt cut through the dark Highveld sky and he doesn’t know what the Drakensberg, Karoo or Johannesburg skyline look like. Despite this, Carl de Campos has experienced more than most other people and has lived life to the full ever since he can remember. For this runner, cyclist and horse rider, it‘s full speed ahead. – BY CATHARINA ROBBERTZE

As a child Carl de Campos hated sport. He attended the Pioneer School for the Visually Impaired in Worcester and chose to focus on his academics rather than head out to the sport fields. It was only once he finished school and attended the Optima College in Pretoria that his dad Jorge and one of his lecturers got him to hit the road running. Little did they know what they were getting him into, because once Carl felt the thrill of competing there was no stopping him.

Carl soon became fitter and faster than his dad and needed a new sighted running partner to keep up with him as he set his heart on completing the Comrades Marathon in 2000. He found a training partner at his running club, Johannesburg Harriers, but struggled to find someone willing to run the Comrades with him. After sending requests all over the city he met Jonathan Selwin, who was willing to tackle the gruelling Comrades at his side. Despite Carl nursing a knee injury, the two men finished their first race in 11:10:33.

However, the struggle to find sighted running partners is one of the reasons Carl graduated to other activities such as cycling, canoeing and eventually horse riding. It is his need for speed that has continually compelled him to look for an event where the wind rushes past his face just that little faster. Therefore, cycling and canoeing fitted Carl like a glove and found a special place in his heart. Riding on a tandem bicycle enabled him to compete at the same level as sighted people. “When I was introduced to the tandem for the first time, it was like a new world opened for me!” he says. Carl and his partner won the tandem category in the first race they competed in and Carl was hooked. He finished three Cape Argus and three 94.7 Cycle Challenges between 1996 and 2004.

BLIND FAITH IN BILLY
Just getting on a horse for the first time was a challenge, as no one wanted to let him ride, despite his obvious love for horses. “People always said I’m going to get hurt and that blind people can’t ride horses.” Fired up with motivation, Carl was adamant to not only ride a horse, but to ride his own horse and finish the Fauresmith 200 Endurance Ride, a gruelling 201km riding event in the Free State.

The road to Fauresmith was filled with challenges and roadblocks, but true to his style, none of them deterred Carl. In just five years he moved out of the arena and onto the endurance track on his own horse, Billy. “I didn’t enjoy the arena because the people there always told me I shouldn’t be on a horse because I’m blind. Also, I got bored of the pace. I love flying around on Billy.”

Buying Billy was a challenge all on its own, as no blind person in the country owned their own horse. In fact, it is safe to say there are few blind horse owners in the world, let alone South Africa. Billy is a 12-year-old cross-bred Gelding – not really the kind of horse most people would take to an endurance race. However, the bond between Carl and Billy was almost immediate and although Billy used to be a ‘hot horse’ that spooked easily and didn’t trust people, he soon relaxed under Carl’s magical touch. Carl knew he would be able to finish Fauresmith on Billy.

However, training for Fauresmith was no easy task! “I experienced a lot of opposition, just as I did when I ran Comrades. Many people were negative and put a lot of doubt in my mind, but Billy and I knew we could do it.” Carl didn’t let this get him down and simply learnt the area in Drum Blade, south of Johannesburg, where he stays with Billy, so they could train on their own. He also did not agree with the training methods his fellow riders used, as they trained on the same route and at the same pace every time. “You can’t train that way – I know that from running,” says Carl.

Although Carl could train on his own, he needed a sighted partner to ride next to him when racing. Unfortunately, Carl’s regular sighted riding partner, who was supposed to ride the Fauresmith with him, was chosen to compete for his provincial team, so he couldn’t accompany Carl during the race. Two new partners later and Carl was back in the saddle, facing the 200km ride with two youngsters almost 20 years his junior. Carl and Billy’s training paid off and they finished the ride at the planned 12km/h pace they had set themselves, kicking dust in the eyes of every single person who said Carl couldn’t do it because he is blind and Billy couldn’t do it because he was not strong enough.

EQUINE BONDING
The freedom he experiences thanks to Billy is liberating, says Carl. “For the first time in my life I can tell someone I’ll meet them at their house before we go for a ride. Do you know how amazing that is?”

The true epitome of a Modern Athlete, Carl is one of those people who sets himself goals and reaches them no matter what anyone tells him. Hard work and training don’t scare him and time and again he has conquered the odds stacked against him, humbling those more fortunate on every occasion.