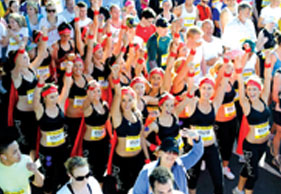 It is hard to imagine 80 000 people entering a 14km race but that is exactly what happened in August this year at the City2Surf run in Sydney, Australia. The City2Surf broke its own record, set the previous year, as the world’s largest timed run. On top of that, this spectacular race was won in the 90s by a South African! – BY MIKE BRAY

This historic event first appeared on the Sydney calendar in 1971 with a field of 2 025 runners of which only 42 where female. A far cry from when Olympian swimming legend and first-time City2Surf participant, Grant Hackett, fired the gun at this year’s 40th running of the event to signal the start for 80 000 entrants, of which approximately half were female.

Appropriately named, the event starts in Hyde Park in Sydney and follows a scenic 14km route to the world-renowned Surf at Bondi Beach. When you describe the setting of an event like this, you can understand why it appeals to so many.

This year saw not only the biggest field but also one of the closest finishes in the history of the run with Ben St Lawrence (41:05) beating Michael Shelley by only one second! Ben first ran this race 20 odd years ago when he was eight, and it has always been a goal of his to win the City2Surf. Young Lara Tamsett was the women’s champion in a time of 46:54 and showed the genes running in the family as she followed in her aunt, Elizabeth Miller’s, footsteps. Elizabeth won the City2Surf in 1997.

The race has a huge emphasis on fun and charity. You will find runners dressed up in some crazy outfits as they run, walk and laugh en route, and most will also be actively raising funds for charity on the day. This year’s event has raised 2 838 075 AUD (approx R19.6 million) which is an incredible effort. Huge kudos goes to the Modern Athletes of Sydney. It’s the end of winter in August, so runners dressed warmly for the start and Girl Guides collected 11.5 tonnes of discarded clothing from the start line for the Smith Family Foundation.

South African runners have left their mark on the event in some unique ways. John Morapedi was one of a select bunch of athletes who have back-to-back victories. He won the event in 1995 and 1996. His time of 40:19 in 1996 put him as seventh on the all time list and only 16 seconds off the record. John reflects on his victories in our living legend interview in this issue. Another South African, Philip ‘Flying Phil’ Rabinowitz has the prestigious honour of being the oldest person to complete the event. He was 100 years old when he did it in 2004. Philip also gained the title of the fastest 100 year old ever to run 100m with a time of 30.86 seconds, in 2004. Unfortunately Phil passed away in Cape Town in 2008 at the ripe old age of 104.
If you ever plan to be in Sydney in August, make sure you enter the City2Surf; just the sheer size of the event makes it a must
do run.