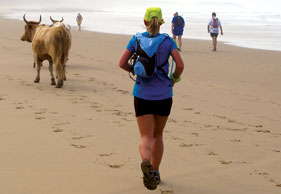 Three days, 112km, the time of my life! Our very own Modern Athlete Editor, Michelle Pieters, shares her race experience of the Wildcoast Wildrun, one of the most incredible journeys she has ever undertaken.

The Wildcoast Wildrun is a multi-day wilderness trail running event which takes you along the most beautiful and unspoilt coastline: the Transkei Wild Coast. Runners run solo for 112km over three days, starting in Kei Mouth just outside East London and finishing at one of the most beautiful natural wonders of South Africa – the Hole-in-the-Wall. Between the start and finish lies 112km of beauty and scenery that is truly hard to describe to anyone. This is my attempt at it!

THE START OF AN UNFORGETTABLE JOURNEY
Often when people find out that I work at a running magazine their first response is: “Wow, you must have an incredible job!” I do, but no, we don’t get to cycle to work, swim at lunchtime and run all day. As in most other jobs we still need to deal with tight deadlines and other work demands. Am I complaining? No way! My publisher, Mike Bray, every so often reminds me that I have the best job in the world. And of course I agree, especially when golden invitations such as an invite to run the Wildcoast Wildrun lands in my email inbox!

The invite from adidas, one of the main sponsors of the Wildcoast Wildrun, was simple: Join 79 other athletes from 9-11 September for the time of your life! The task: Run 112km in three days. Stage distances are 43km, 35km and 34km respectively and the terrain varies from long stretches of beach running to trail running on cattle tracks, through a nature reserve and sometimes on no paths at all. There are no route markers, just follow the coastline, keep the ocean on your right and run until you see the banners at the finish. And then they mentioned the river crossings… It sounded like my kind of challenge. Was I going to decline? No way. It meant three days of doing one of the things I love best: run! And even better, it meant running long stretches next to the ocean, my favourite part of nature.

Coming from a Comrades background with more road races to my name than trail races, I was a bit hesitant about the terrain but with a good dose of optimism I packed my bags and on 8 September I boarded a flight to East London where my adventure was about to start. After an hour-long bus ride to the start in Kei Mouth, we registered, and had time for a quick look around before the race briefing by Owen Middleton, the race organiser. Sitting under the stars in the cool dark night with 79 like-minded athletes made me feel grateful for the opportunity to be able to live a healthy life and partake in sport in a country with such unspoilt beauty!

DAY ONE: Kei River Mouth to Kob Inn: 43km
The day started in very a special way; we crossed the Kei River on a ferry to the starting line. I did a quick check: running bag, Gu energy gels, plasters, emergency supplies, camera… whatever I’d forgotten was too late anyway. The Wildrun vuvuzela sounded and we were off! The excitement amongst the runners was tangible. None of us really knew what awaited us. At first many of us fiddled with loose running bags as we all tried to find a rhythm. Then we hit the beach and the incredible beauty of it all took my mind off anything that was bothering me.

The first day was characterised by very long stretches of beach running, sometimes on hard sand and sometimes on what was to become ‘the dreaded soft sand’. The beach running was mixed with some inland running on soft sand, grassy slopes, cattle tracks, NO tracks at all and for that matter, any path you found or chose to make your way on.

One of the most beautiful moments of Day 1 was reaching the top of a grassy hill, looking down onto the raging ocean and seeing a group of cattle strolling slowly along the beach. I was in heaven!

Runners started pairing up, chatting and getting to know each other while the beautiful kilometres passed one by one. Then we reached our first river crossing, the Khobonqaba River. At that stage most of us carefully took our shoes off to avoid running with wet shoes and getting blisters. The cool water turned out to be refreshing on tired legs and I was looking forward to the next crossing over the iNxaxo River!

After more beach running… and then some more… we passed through Mazeppa Bay and reached our final river crossing. Then a short beach run to a warm welcome at the finish. Day 1 done!

The afternoon was so much fun; new friendships were formed and runners were sharing their day’s experiences. It was off to bed early.

DAY TWO: Kob Inn to The Haven: 35km
We started the day with a quick repeat of the race briefing from the previous night. Owen explained, keep the ocean on your right, and be warned, whatever you do, don’t get lost in Dwesa Nature Reserve. You might end up running two hours longer than necessary.

Now those close to me know that a sense of direction is not my strongest asset. Owen explained: After you’ve run up the third hill, you hit a dip, you enter a hole in the forest, and see two paths. Follow the one on the right, look for the palm trees (or was it the strelitzia?), stay on the Jeep track…  My head was spinning and I decided to make sure I hung onto my new friends, Lissa Parsons and Tarren Meyer, two runners from Sunninghill Striders. Now these two girls love running just as much as they love a good dice with fellow runners. I was soon to find out that they are like little Energizer batteries that know no end.

We were off! Day two’s scenery was breathtaking. It saw us running through some of the most beautiful beach and inland stretches. I was amazed at the thousands of seashells as big as those you buy in shops that were lying untouched on the beach. At one stage we were running on top of beds of thousands of seashells. Wow! Day two was harder than the first day with a vertical gain of 510m.

At some undulating grassy slopes we had to watch each foot placement as the terrain was quite technical. It started getting hot and the distance also started taking its toll but the scenery made up for it. We reached Nqabara before making our way to the gates of Dwesa Nature Reserve. Lissa and Tarren were on a mission and turned on the pace. Though I am sure we missed all of Owen’s directions (apart from the strelitzia I think I saw!) we managed to make it through the highlight of day two: running through Dwesa Nature Reserve. My favourite part of this was running on no path through long grass taller than me.

One more river crossing at the Mbashe River mouth this time with shoes and all – and a short run on a Jeep track saw us reach the finish at The Haven. I was tired but ecstatic; we finished in fourth, fifth and sixth position amongst the ladies. What an incredible feeling (Thanks Tarren and Lissa).
By now blisters had started setting in and runners were comparing blisters and dishing out the best advice on how to (or how not to) pop a blister.

BOB’S YOUR MAN
The afternoon of day two made for some emotional (and funny) moments. Bob Skinstad, former Springbok rugby player, was one of the runners in our group. His cause for running was slightly different to ours; he ran as part of the Bobs for Good Foundation, aimed at helping underprivileged schoolchildren with school shoes.

Seven million children in South Africa go without shoes every day. The intention of the Bobs for Good Foundation is to change this, one pair of shoes at a time. The Foundation believes that through the gift of brand new school shoes a small seed of belief, dignity and pride is planted in young learners, which will allow them to grow to become real contributors to our country’s future.

A group of sore and stiff runners with 79km of running in their legs, all bundled on the back of bakkies, in cars and a seatless Vito, to deliver the shoes to the kids. I landed up in the seatless Vito and the air was filled with jokes and laughter as we tried to avoid bumping each other’s blister-filled feet!

The light atmosphere soon made space for some emotional scenes that I will forever remember: hundreds of barefoot Transkei schoolchildren eagerly waiting at the school for their big surprise. And when hundreds of boxes of shoes arrived and they all got a chance to try the right size on, it was heartwarming to see how they gripped each box tightly under their arms before hurrying away with a smile as big as the ocean!

The Bobs for Good Foundation has done some amazing work in the past. Check out their website at www.bobsforgood.com.

DAY THREE: The Haven to the Hole-in-the-Wall: 34km
The last day of our 112km journey was upon us. Day three was the shortest distance but by far the hardest day with a vertical gain of 880m. By now our bodies were tired and sore, especially our feet. Starting the first day was not easy. The first few steps were painful but after a few kilometres of easy running the aching muscles started to warm up.

The first 14km were easy running… then the fun started. The terrain was technical, there were very few paths and I’m sure we were a bit lost at some stage. Some runners chose jeep track, others coastline, all making our way to Breezy Point. And then there were the huge hills (no, mountains) we had to negotiate. But each and every time we reached the top of yet another hill the views were incredible. My favourite moment was when Lissa, Tarren and myself were running on a narrow grassy ledge, with a steep descent to the right, the most beautiful blue ocean below and a helicopter filming us only meters away. What a feeling!

It felt as if we crossed endless hills and then suddenly a different feeling set in amongst the runners; it was as if we knew the finish was near. We reached the top of a hill and then there it was; the most beautiful sight, the Hole-in-the-Wall. Our journey was about to end.

A friendly fellow runner offered to take a picture of us girls at the top of the hill. As soon as the picture was taken we started sprinting. Our blisters were forgotten, the sore muscles no longer counted, all we wanted to do was reach the finish line. We sprinted down a steep descent, then onto the beach, through some water and across the finish line. We did it!

THE TIME OF MY LIFE
I truly had the time of my life and experienced something that I will forever treasure. I made new friends and created lasting memories (and scars from the blisters).

Thank you to Owen Middleton, Tamaryn Jupp and
the rest of the Wildcoast Wildrun team for one of the best organised races I have ever been to. And a huge
thank you to the team at adidas for making the trip possible and sending me on this incredible journey!