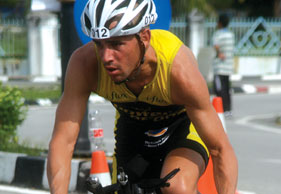 Top South African duathlete Bryce Viegas is tearing up the local duathlon scene. He has just taken part in the very competitive Afriman Duathlon and will soon be off to Malaysia to take part in Powerman Malaysia. Bryce gave Modern Athlete an inside look into the life of a top duathlete, what it takes to race at an elite level and the lessons he has learnt on his way to the top – BY MICHELLE PIETERS

Success comes down to training harder, better and longer than your competitors and once you have crossed the finish line in first position, it becomes an addiction, an amazing feeling that you have achieved something you have wanted and worked on for so long. It is feelings like these that have helped Bryce Viegas reach top honours in various duathlons locally and internationally. In 2009 he had his best year yet, not only winning Afriman (10km run, 77km cycle and 5km run) but also placing second at the highly-competitive Powerman Malaysia. Now Bryce is setting his sights on a victory at his second Powerman Malaysia on 14 November.

Sporting Genes
Bryce’s father, Tony, has run 16 Comrades Marathons and his aunt is a former Ironman winner. Therefore it was inevitable that a young Bryce would take up some kind of sport. In primary school and later in high school, he tried everything from soccer to hockey to cross-country running. He clearly had running talent as he was selected to compete at the SA Cross-Country Champs at the age of 12. But Bryce never really pushed himself as a youngster, something he believes has probably helped him achieve longevity in duathlon. “I did whatever came along but I must admit I was a bit lazy. I was not willing to put my heart into anything.”

His love for duathlon started while visiting his Ironman aunt, Pauline Cound. “We used to second her on races and visit her at home. I remember how I stared at her bikes!” In Grade 11 he got his very first bike. “Owning a bike was the best feeling ever. All I did was ride my bike after school. My mom’s prayer life certainly increased with me out on the roads every day,” chuckles 27-year-old Bryce, who today lives and trains in the West Rand.

At the age of 17 Bryce placed second in his first duathlon and in Grade 12 he won the Gauteng Duathlon Champs and the SA Duathlon Champs in his age category before being selected for the World Junior Duathlon Champs in Italy in 2001, which he won! “It was my first time overseas and everything was new. I remember the rain and cold but I had a great race and I won! It felt surreal.”

Making Waves
Since then Bryce has competed successfully in several local and international races, placing fifth overall in the popular Teavigo Duathlon Series. He realised that the harder you work, the better the results. “And the more you achieve, the harder you want to train. It is a snowball effect.”

In 2009 he had a major local breakthrough when he won the highly-acclaimed Afriman Duathlon. “It was an unbelievable feeling. My parents, my friends and my coach were there. It was an emotional relief more than anything else; I proved to myself that I could win and that hard training does pay off. That was probably one of the most memorable moments of my sporting career.”

Bryce started coaching while participating locally and internationally, representing South Africa at the World Champs in Belgium in 2003. He competed in his first Powerman in 2008 and realised his talent was in longer duathlons. “I knew that was the start of my career in the Powerman series. I would love to be ranked in the top three of the Powerman series.”

Lessons Learnt
Over the years Bryce has learnt that, as in life, nothing comes easy in sport. Shortly after he won the World Junior Duathlon Champs he thought he had it made, sat back and relaxed. This led to him finishing stone last in a race, which demotivated him to such an extent that he stopped participating in any sport for two years! “Then I had a hard look at my life, my sport and my dreams. I slowly picked myself up and started working really hard.”

He has also learnt that one cannot achieve top honours without a coach. “I tried to coach myself and relied on the help of friends for too long. If you want to reach the top you need to train with other like-minded athletes under the watchful eye of a coach,” says Bryce, who today trains with world-class athlete Juan van Deventer.

“Only when I got a coach, I realised how hard one needs to work to get to the top. Some days I train three times a day. And yes, I do sometimes question why I am doing what I do!”

Family is one of the most important aspects in any athlete’s journey to the top. “My family has supported me through everything. They are amazing! My dad is so passionate and supports me at every race. I see him as my best friend. My mom’s strong faith has helped me through many obstacles in life and my sister, Megan, is my number one supporter! You cannot succeed without the support and love of your family.”

Believe in Yourself
Bryce has had many disappointments ranging from injuries to difficulty in securing sporting sponsors, but he believes with hard work anything is possible. “When I get despondent I remind myself of what Sebastian Coe wrote. He said you have to always think of your competitors and what they are doing. And then you have to train harder, longer and smarter than anyone else.”

He runs twice a day six times a week at a pace of around 3:30min/km, mixing his training between lactate runs, track work and longer runs. “You have to train fast to race fast.” Then he does a couple of cycling sessions a week culminating in a long ride of between 120-150km on the weekend. “As a multisport athlete one is always struggling to find the right balance.”

Bryce has realised that if he wants to make millions, he has chosen the wrong sport! “You have to have a passion and a dream. And you have to be willing to give up many things and let nothing get in your way.” For now he has his heart set on Powerman Malaysia and in future, he still has Ironman and Comrades to tick off on his to-do list.

And when things get tough he holds onto these words: “Pain is a purifier. You must work towards it; embrace it because one day it will make you a champion.”

He does have a softer side. Something very few people know about him is that he loves baking! “No one knows it but I love to bake cakes, brownies and scones,” he chuckles.

Not bad, a man that can run, bike and bake!