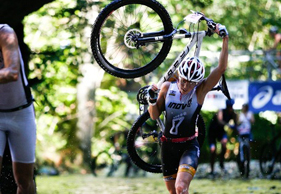 Name it and she does it: road running, trail running, triathlons, mountain biking, road biking and even adventure racing. Carla van Huyssteen is the perfect example of a Jack of all Trades and a Master of ALL! She is one of the few athletes in South Africa who not only participates in so many different sporting disciplines, but also excels at most of them. – BY MICHELLE PIETERS

If you had to name nearly any sport you can think of and ask bubbly Carla van Huyssteen if she had ever tried it out, or competed in it, you can bet the answer will be a resounding yes! At the age of 26, she has a sporting CV that leaves your head spinning.

The cherry on the top of this long list of achievements was Carla’s first place in the 20-24 age group at the 2008 Triathlon World Champs in Canada!

And there is no stopping her now. More recent achievements include a fourth place at the Xterra Champs in Switzerland in September, which she followed with a local win of the first leg of the BSG Energade Triathlon Series at the Roodeplaat Dam in Gauteng.

HER FATHER IS A SPRINGBOK LEGEND
With a father like former Springbok rugby player Gerrie Germishuys, Carla was bound to take up some kind of sport. Little did her parents know that their sporting daughter would one day take up more types of sport than any other regular girl. “I grew up in a sporting family and had a natural sporting ability from a young age. I participated in everything – netball, tennis, hockey, athletics, gymnastics. Name it and I did it,” says Carla who grew up in Linden, Johannesburg, but today lives in Pretoria.

She has always been game for anything. Even when a school friend asked her in grade 11 to swim the Midmar Mile with her, Carla did not hesitate to say yes! “My parents thought I was crazy. Our pool was only about 10 metres long, but every Saturday I swam up and down for about an hour! It took me forever to complete the Midmar Mile, but I was so proud of myself!”

VARSITY SPORTS
At the University of Pretoria, where Carla studied physiotherapy, she played hockey and was part of the Northern Gauteng u/21 team. That was clearly not enough. In her second year she decided to do the BSG Energade Triathlon Series with some friends. She bought a bike, started swimming a bit more, and in 2004 completed her first triathlon. “My friends and I eventually did the whole series and I finished in 15th, 30th and 35th positions!”

Another triathlete friend recognised Carla’s potential and persuaded her to take it a bit more seriously. “He gave me a training programme and in 2005 I competed in my first Gauteng North Championship, where I finished in eighth position.” Carla then joined a training group and surprised herself and her parents when she finished first at the SA Triathlon Champs (age group 20-24) in 2005. “My parents were at the finish and they were so proud, and as surprised as I was, that I actually won! I was only hoping for top 10.” Carla qualified for the Triathlon World Champs in Hawaii that year and had her sights firmly set on doing well.

RACING FOR ADVENTURE
In the meantime, a friend approached her to be part of an adventure racing team and true to Carla’s nature, she saw this as a challenge and grabbed it with both hands. “I didn’t even have a mountain bike, but when I pitched on the day of the 180km race, my team gave me a bike to use. It was the first time I got on a mountain bike, but I was game for anything, so I hopped on and got off to a good start.”

Now for those who don’t know too much about adventure racing; it takes quite a bit of technical skills and a lot of endurance! All team members need to stay together at all times and complete all tasks, which include anything from running, rowing and abseiling, to mountain biking. A navigator plots the route and the race can take several days. “This opened a whole new world to me. I saw things I thought I would never see, and did things I only dreamt of.”

Carla was hooked on adventure racing and in between her triathlon training, she competed in some serious adventure races, such as the Bull of Africa, a 500km race over seven days. Unfortunately, she got injured shortly before the Triathlon World Champs, but because everything was paid for and organised, she decided to still give it a go. She reached the finish line in a disappointing position. “That made me realise I could not concentrate on adventure racing and all my other sports. Adventure racing is just too extreme. It is very hard on your body and it takes a long time to recover.”

FALLING IN LOVE WITH XTERRA
Carla’s love for the outdoors and need for adventure was satisfied when she shortly afterwards discovered Xterra off-road triathlon racing. She finished third at her very first Xterra race, but admits to being very inexperienced at first, and chuckles when she remembers how she competed in a swimming costume while all the other athletes were wearing expensive triathlon suits!

“I love doing Xterra races. It’s exactly like triathlons but the bike leg is on a mountain bike and the run is a trail run. It is so much fun!” She raced as part of Team Jeep for a while. “I have to admit my passion is with Xterra racing. It doesn’t matter if you have a good race or not, whether you are slow or fast, at some stage in the race you are going to look around and see the beauty that surrounds you!”

DIVERSITY
Carla admits to sometimes feeling torn between all the different disciplines she loves so much. “I have done so many diverse things and must admit that sometimes I feel all these different sides tearing at me. When I get to an Xterra race I just want to train harder on my mountain bike, but when I get to a triathlon I am inspired to train harder and improve my 10km road run!” She says she still has to work hard at all the different disciplines, though. “I definitely have an above average talent for most disciplines, but there is no one discipline that comes naturally to me. I have to work hard at everything and concentrate on technique.”

Carla, who is a qualified physiotherapist, met her husband, Dreyer, who is also a very good sportsman, through the sporting squads they were training with. Naturally, their first date was a three-hour mountain bike ride! They got married in April this year and Carla describes it as the most amazing day of her life.

ELITE ATHLETE
Carla currently competes as an elite athlete and recently did her country proud when she finished fourth at an Xterra in Switzerland in September. “That’s when I made up my mind that I would like to concentrate on Xterra races from next year.” She quickly adds that this does not mean she will be giving up any of her other sporting disciplines. “I will still race triathlons and other races. It’s all part of training,” says Carla, who races for Team INOV-8, named after the trail running shoe that has won several awards in Europe as the trail shoe of the year.

Currently, Carla is building up to March, when the international Xterra season starts. She is also considering competing at the Ironman 70.3 in January, all depending on other races around that time. “Xterra racing and races such as Half Ironman are not just about speed. They are about endurance, and I have realised these type of races suit me best.”

She trains under the watchful eye of professionals at the High Performance Centre in Pretoria and swims 16 to 25km, runs 60 to 80km (including two track sessions), and does four bike sessions per week. Carla thrives on this type of training, as she says she never gets bored!

Her advice to novices wanting to get involved in triathlons or any other sporting discipline is to join a training group. “You get to learn so much and you can ask advice from people who have been there and done that. Also, have a good look at your lifestyle and how much time you have to train. Don’t let it take over your life! Keep perspective and have clear goals. Most of all enjoy it!”