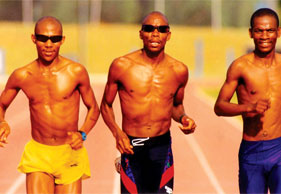 His career was unfortunately cut short by injury, but John Morapedi was part of an exciting period of South African running in the second half of the 90s, and his running talent really allowed him to see the world. – BY SEAN FALCONER

In 1995 a 19-year-old South African arrived in Sydney to run the 14km City2Surf. Nobody in Australia had heard of John Morapedi, but that soon changed when he crossed the finish line first in 41:05. “It was a tough race, especially Heartbreak Hill near the middle, but my strategy was to make my move on the big climb when the other runners slowed down,” recalls John. A year later he was back in Sydney to defend his title. He actually flew straight from Atlanta in the United States, where he had represented South Africa in the Olympic 5000m, winning his first round heat but unfortunately fading to 13th in the semi-final and being eliminated.

In Sydney John was now a known entity, with the rest of the elite field painting an imaginary target on his back, but once again he went out hard for the win. After a ding-dong battle with Australian Darren Wilsoni, John broke the tape in 40:19, which remains the seventh-fastest time ever for this race. “Even though many of them were just fun runners or walkers, it felt really good to be first out of 43 000 runners on the day!” says John.

TOP TRIO
John grew up in Sharpeville and took up running competitively in 1995 when he began working and running for Correctional Services in Vereeniging, which at the time had an impressive squad of young track runners, including Shadrack Hoff. John and his training partners often competed together in highly-entertaining track races, with another friend and rival, Hendrick Ramaala, often lining up as well. “I wish I had videos or DVDs of those races to watch now,” says John.

While Shadrack and Hendrick captured most of the headlines, John was quietly building his own impressive reputation. He was SA 5000m champion in 1996 and 1997 on the track, won the 10km national title on the road in 1997, and claimed the 12km long course title at the 1997 SA Cross-Country Champs. Besides the USA and Australia, John also ran in Europe, South America and the Far East. He represented South Africa at five World Cross-Country Championships from 1994 to 1999, as well as the 1996 Olympics and the 1998 Commonwealth Games in Malaysia (where he again won his first round heat, then got knocked out in the semi-final round).

KNEE KNOCKOUT
In 1999, having recently run as a pacesetter in the Beppu Marathon in Japan, John was back home and out on a morning training run when he felt something ‘go’ in his knee. Despite physio and gymming, he was unable to get back on the road again and quietly faded out of the sport. Now aged 33 and living in Krugersdorp, John works as a donor attendant for the blood donor branch in Westgate Mall.

John was so disappointed about being forced to retire that for ten years he could not even bring himself to watch athletics on television. Last year he finally overcame that: “I managed to switch my brain on again,” he says, and now he is even thinking of lacing up his running shoes again. “I know I can run again, and I would love to make a comeback, but I can’t say that I will be the same John Morapedi as before. Still, I believe that I was given a talent for running, and with commitment and discipline I can give that talent a life again.”

One thought on “SA’s City2Surf Hero”