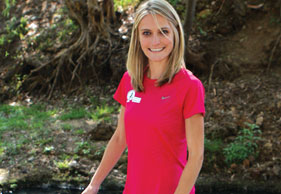 She is the SA 10km and 21.1km champion. She has won nearly every road race she has run in the last year, and it is very likely that within the next couple of days Irvette van Blerk will be crowned the new queen of the Women’s SPAR Grand Prix Series before she leaves for the World Half Marathon Champs. Irvette has blitzed onto the scene in the last year, after having dealt with a series of injuries and personal setbacks. – BY MICHELLE PIETERS

Running has always been a part of her life; you could say that Irvette van Blerk is a perfect example of someone who lives and breathes running! Even as a little girl she watched her godmother and former Comrades winner, Francis van Blerk, kick dust in the eyes of her competitors. After most races Francis hung her medals around young Irvette’s neck who then hurried home where she displayed yet another medal or trophy from her beloved aunt. She never missed a race Francis ran. She was always there, watching and yearning for the day when she would have her very own medals.

Today Irvette no longer has to adorn her room with someone else’s medals. She has enough of her own. Not only did she recently win the SA 10km Champs, she followed it with a win at the SA Half Marathon Championships where she crossed the line in a PB of 71:09. Most recently she won the Southern Region Half Marathon Championships in Malawi and the City-to-City 10km in a time of 34:30. She is the favourite in the last leg of the Women’s SPAR Grand Prix on 10 October in Randburg where she has an excellent chance of taking the series. Then, on 16 October she will represent South Africa at the World Half Marathon Champs in China.

Champion in the Making
At the age of nine, Irvette was ready to do some of her own running. “I wanted my own trophies and medals and started to run cross-country.” She ran 4km daily; 2km in the morning followed by another 2km in the evening, of course all done under the watchful eye of her mom who followed her in the car. Irvette was dedicated; even when she had extra maths lessons, she asked her mom to drop her 2km from home so she could run back and make sure she did not miss a run!

At the age of 13 she started training with a coach. In many races she would only finish ninth but at the age of 14, she won her first SA Cross-Country Championship. “That’s when I realised I might have some running talent!” As a junior she represented South Africa at the World Cross-Country Champs and also made name for herself locally when she won the Johannesburg leg of the SPAR ladies’ race.

A Bad Accident threatens Irvette’s Career
At the end of Grade 11 Irvette was involved in a scooter accident and could barely walk for two months. “Doctors said I would probably never run again. It took me long to recover but I did!” Irvette was back at the World Cross-Country Champs three months later, finishing in 26th position.

This helped her regain running confidence and she slowly made a comeback. As with many university students, Irvette started partying more than she ran while studying at the University of Johannesburg. Two years later she realised varsity life was not for her, and at the same time, experienced a renewed passion for running. She starting working with a new coach, Gerrie Coetzee, under whose watchful eye she still trains today.

Injuries and Setbacks
Irvette is only 23 years old but has had to deal with injuries and personal setbacks. “At first I battled with recurring injuries. Luckily I managed to sort it out when I took a total break from running and found a good physio.” Then personal tragedy struck. Her stepdad passed away in a motorcycle accident last year, shortly before she was to run her first 42.2km at the Soweto Marathon. At his funeral Irvette made a silent promise to him that she would run the Olympic Marathon in 2012. “He was like my real dad. For a couple of weeks after his death I did not feel like running.”

Time Heals All Wounds
Then last year, at the 32km Tough One in Randburg, Irvette decided that was the day she would start training properly again. “What a race I chose! I was so unfit and at the 18km mark I started walking!” It might have been a tough race and a traumatic time in her personal life, but it made Irvette realise that one should never put anything off. “I learned that today is what counts. I also learned that if you have a good race, you should be grateful because you never know if you will be able to do it again!”

An Incredible Comeback
Irvette started 2010 off with a bang. She won the Dis-Chem Half Marathon in Bedfordview and followed it up with numerous victories at races countrywide. “Since December I have renewed motivation. I realise how important mental strength is. In the past I would lose races before I even started, just because my mind was not right.”

A couple of months after the Dis-Chem race, Irvette shone again when she ran her first Two Oceans Half Marathon, finishing second in a PB of 72:55. Irvette and winner Ren? Kalmer both broke the previous course record!

Spar Ladies
She loves competing in the Women’s SPAR Grand Prix Series. “At most races men get all the attention because they are way up in front. Also, they are always running along us in our space, which is not always nice. In this race the focus is on us!”

Irvette recently won the Pretoria leg of the series. “It was one of those days where I just felt so good!” It was not without a bit of a drama though. She was late because of traffic and then she had to try and make her way through thousands of women already lined up. When she eventually got to the front she felt a bit nervous seeing the country’s cream of the crop lined up.

Initially Irvette planned to run in the pack up to the 7km mark, but before she knew it she was leading! “We went through the 5km mark in 17:05. I thought it was too fast, but decided now I just have to run, chase the leading car and see what happens! When I turned to look who was behind me at the 9km mark, I realised that I would win! I entered the stadium with a big smile because I knew I could relax a little and enjoy the winning moment.”

Only hours later Irvette and her clubmate and friend, Ren? Kalmer, were on a plane to KwaZulu-Natal to compete in the KZN leg of the same series. They only got to bed at about 11pm and were understandably tired at the lineup the next morning. Ren?, who later realised she had glandular fever, started fast and Irvette thought it was going to be a tough race! At the 3km mark Ren? fell off the pace and once again Irvette found herself in the lead. “I was tired! But just kept running and managed to win.”

Currently Irvette is leading the Grand Prix series and a win or even a second place at the last leg in Johannesburg could, depending on finishing times, see her being crowned as the new queen of Spar.

Training
Irvette trains six days a week starting every morning with a run of between 7-16km. Three times a week in the afternoon is quality time on the track or a fartlek session. A typical track session varies between 5-12 repetitions of 800m, 20 repetitions of 400m or 30 repetitions of 200m. “We only get to rest 15 seconds in between. There are times I feel our training is harder than our racing,” says Irvette, who runs an average of 150km a week.

She prefers the half marathon distance and definitely prefers road running to track, which she finds boring. Just like many runners she sometimes finds running hard and needs to motivate herself. “When I start battling and I see there is 3km to go, I try to motivate myself by thinking in terms of minutes and not distance. I tell myself I have 12 minutes tops left!”

She realises some are concerned that she is racing too often. “The truth is when I go and run a road race, I am not always racing! I am only using it as my long run. It is easier than running alone! Sometimes I end up winning, which is a bonus.”

Looking Ahead
Irvette would like to eventually move up to the marathon distance, but for now she is working on improving her speed. “My big goal is to run the marathon at the 2012 Olympics. It is going to be hard work, but what a goal!”

Irvette is very happy at the Nedbank running club. “It is a fantastic club and Nick (Bester) is an excellent manager. Everything is always so well-organised and everything gets done for us!” When she doesn’t run, she loves to eat pizza, spend time with her girlfriends and of course her boyfriend, champion hurdler, LJ Van Zyl. She feels finally this is her time! But she is taking nothing for granted and compares running to life. “Enjoy every moment, because it can be taken from you any minute.”