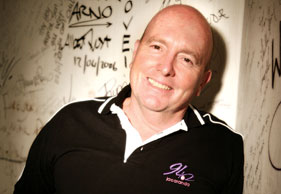 Between stressful jobs and trying to spend quality time with the family, exercise is often the first thing that falls to the bottom of our list. Modern Athlete speaks to high-powered professionals to find out how they manage to fit sport into their hectic schedules. This month we chat to John Walland, sports presenter for Jacaranda fm 94.2 and East Coast Radio. – BY MICHELLE PIETERS

How did you get involved in broadcasting?
When I was a kid I thought there was a little man in a radio. I listened to radio stories all the time. It was in the time before TV came along and I was totally intrigued by radio. When I was in my early 20s I worked in the pharmaceutical industry. I knew I wanted to get into radio, but did not know how to. So I phoned the station manager at SABC who asked how good my sporting knowledge was. I mentioned I’d run a couple of Comrades and he sent me to Polokwane to commentate on the interprovincial championships. I never say no to anything, so off I went, but I was so nervous that day I called the wrong winner! In 1989 I started off at 5fm on a freelance basis. In 1994 I joined on a contract basis and later I joined Darren Scott in the ‘Just Plain Show’, doing sports as well as the Nashua sports trax. I then left 5fm and joined 94.7 Highveld Stereo. Later on I moved to Jacaranda fm 94.2 where I now have a morning slot with Darren Scott in ‘Just Plain Darren’.In the afternoon I have a slot on ECR. I research, compose and read the sport. I am also an MC and DJ at various functions.

What does a day in your life look like?
I get up at 4:30am every morning. It is very difficult, especially in winter! But it has benefits; at 9:30am I am done and then I have freedom till my afternoon show. I contribute two interviews to the Sports Cage each night; it gets played on OFM, ECR, Algoa and Jacaranda fm 94.2 with its 2.4 million listeners! My job has become second nature, but weekends I switch off completely. Life is not just about your job, it is about other people, family and enjoying nature. People think I spend my weekends watching every sporting game. What a boring person I would be! There is a time for work and a time to relax.

Most memorable moment in your career and in sport?
I was MC at a function of former president Nelson Mandela. There is something so special about him. In sport it was when I finished my tenth Comrades. I always set out to run ten Comrades. It was such an exhilarating feeling.

Are there any interviews with sporting stars that stand out?
I am not usually in awe of celebrities, but the Rugby World Cup and Francois Pienaar definitely stand out.

Why are you passionate about sport?
I love feeling fit and healthy!

How did you start running?
I started when I was 16.
I ran cross-country, loved it and kept on running from there.

What do you see as the biggest obstacle to your running?
I don’t like running alone, and time. I have free time between my two radio slots but I don’t like running alone and I don’t have time to run in the mornings with friends. I try to go to gym and on weekends I run with buddies from Fourways Running Club. I have a three-year-old son and try to run with him in the baby jogger as often as I can. I used to run quite a few races, but not anymore. Life is full of change and one has to adapt to it.

Has running influenced your career and work ethic?
Yes, it has made me more enthusiastic, determined and energetic.

Are you competitive?
No, these days I am just trying to hang on to other people! I was very competitive in my younger years. My PB for a marathon is 2:51 and for Comrades 7:41.

What is your favourite meal after a big race?
Usually pasta and chicken but after Comrades, a rump steak!

What would you say to someone who says that they don’t have the time to start running?
Try to make time! Also accept that your life changes from time to time and try to adapt to it.

Most embarrassing moment in running?
On two occasions at the New York City Marathon I ran with two blind guys. We were so mismatched. They were much faster. It was very funny; these blind guys were leading and dragging me! I reached the finish line and was flat on my back. One blind guy kept on asking where I was and I had to shout: ‘I am here!’

What is the first thing you do after a run?
I have a cold beer!

What are your future running goals?
I would love to run the Comrades with my son but by then I will be an old man! I would also like to bike from PE, where I grew up, to Cape Town. Then I would also love to try some trail running. I think more people are moving away from long distance running and trying other things.

Favourite quote?
Yesterday is the past, tomorrow is the future but today is a gift.

Any advice to novices?
Take it slow! Don’t set your goals too high otherwise you might fail or get injured. Walk before you can run!