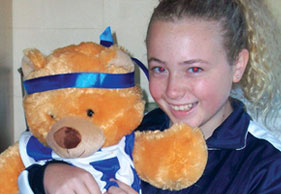 This great story was sent to Modern Athlete by Raymond Fuller, editor of the acsis Varsity Old Boys (VOB) club magazine, Imabaleki. He wrote that they had a lovely article submitted by Emily Cooper, the 13-year-old daughter of one of their members, Nicky Horenz, and they decided to publish it virtually unedited – they even left in the ‘smiley faces’. Emily was in charge of the club’s mascot at Comrades while her mom was running. From the sounds of things, the club actually had two mascots at this year’s race! Here is Emily’s story in her own words, republished here with her permission – virtually unedited and complete with ‘smiley faces’.

Running is a big part of my life. I love to run, even if I am not very good at it. Every year for the past three years I have asked for a ticket to go watch my mom run Comrades as my birthday present. I was unsuccessful the first time, but for the second two my mom gave in. 🙂

I was so excited to go to Comrades this year because it is one of my favourite times of the year, and she hadn’t done it last year. About a week before we were set to fly to Durban, my mom arrived home with a bear dressed in running kit. I was introduced to Bruce and was told that Coach Ray had asked me to take care of him at Comrades. My Comrades trip just got even more exciting.

After a whole lot of studying, it was finally time to leave for Comrades. I missed school that Friday and was going to miss the next Monday and Tuesday. I don’t think I’ll ever forget lying in the sun at our hotel and thinking, ‘My friends are doing exams right now’. 🙂

The flight felt much longer than what it really was, but eventually we landed in Durban. Even as you step out of the aeroplane you can feel the buzz. Everyone is thinking about Comrades and the weekend coming up was only about the runners. After sitting in traffic for about half an hour, to cover about half a kilometre, we finally got to the Expo. Along with the finish, the Expo is one of my favourite parts and I’m sure a lot of runners would agree with me.

The Expo is just magical. Everyone is so excited about what is going to happen in just two days’ time. Nerves are being thrown about and the excitement is growing. After buying a few things, and my sister’s very own bear, we met the gang at the bar where my grandfather was excited to find a beer called the Whistling Weasel. Even Bruce had a beer. 🙂 The next day we had to put up the VOB tent at the finish. Everyone on the club’s Comrades Committee helped to put it up, which was where I first met Bev and Dave and Thomas.

It didn’t take long to put up and we all posed for photos in front of the finish and worked out which cameras would be pointing at my mom as she ran down the finishing straight with Bruce. Even then you could feel the vibe. The atmosphere was incredible, to say the least.

RACE DAY
The alarms sounded at 2am for my mom and Di to get up, but Bruce and I stayed in bed until 5:30am – because the best supporters need their sleep! 🙂

Bruce’s number was on and ready to go. Our first stop was at 33km into the race, where Bev had to stop running. We saw most of the runners that we needed to and a lot of VOB runners, who Bruce waved to. Bruce was very popular among the runners and spectators alike, and became even more popular as the day went on. I remember a runner from Australia took a photo of Bruce cheering the runners on. We helped Bev to the car, all feeling a little down, but assuring her that it can happen to the best, even though it doesn’t make anyone feel better.

Our next stop was at 60km: ‘The Big Downhill’ at Fields Hill. We saw many runners grimace while going down that very steep hill. That was my favourite stop, because there was music playing and the vibe was once again incredible. All our amazing runners went past, all smiling and looking strong, but I think the Biggest Smile Award definitely has to go to Linda Coetzee who runs for Pinelands and was doing her first Comrades. That was the last stop that we could go to because we needed to get to the finish.

THE FINISH
As I said, the finish is one of my favourite parts. Everything about it is incredible. The looks on the faces of those runners are indescribable and priceless. Bruce cheered all the runners that crossed that line, but he was slightly biased towards the VOB runners, including our silver medallists, Alan Matthews, Duncan Gilmour and Joanna Thomas. 🙂

After a while of waiting and cheering and climbing up poles to get a better view, we saw the runners who were in front of mom come in. Smiles everywhere. I think it’s impossible not to smile when finishing something this amazing. And mostly everyone stayed to see the rest of the runners in.

Then the blonde hair. I saw it running towards me and I knew that my mom had just entered the stadium. She ran past and grabbed Bruce. I climbed off my pole and ran to the VOB tent and waited for my mom. Everyone was there, smiling and grimacing, smiling and grimacing. Congratulations were given to all the runners, and the feeling of utmost happiness was indescribable.

My mom ‘waddled’ over to the VOB tent and sat down. She got a finishing time of 9:50:13, which to me is amazing. Cellphones were going crazy, as a lot of my family had seen my mom and Bruce cross the line on TV. Bruce was handed back to me, all wet and smelly. Oh well, it’s a runner smell, a smell I have grown up with. 🙂

The day was, for most, an incredible success, but all good things have to come to an end, and so this one did. That was the end of Bruce and my Comrades 2010 experience, but what’s the bet we will be back next year?

All you runners who even got to the start of this run, you are all my role models, and you are incredible, if slightly mad. 🙂 Bruce and I had an amazing experience and I’m so grateful to have been given the opportunity. Thank you!